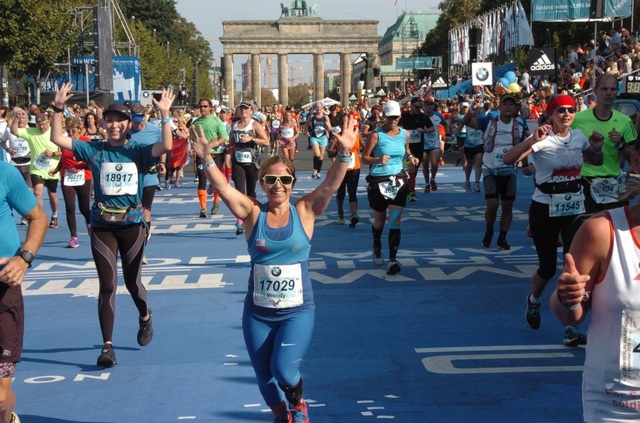 For LDS marathon runner Wendy Garrett, being able to walk a mile is a miracle, let alone run 26.2.

In 2010, Garrett suffered an accident that rendered her left leg useless and left her with several neck and back injuries. It wasn't until three years later and a visit to her 25th doctor that she was finally diagnosed with a spinal cord injury and fitted with an orthotic that provided enough support to allow Garrett to begin walking—and eventually running—on her own. 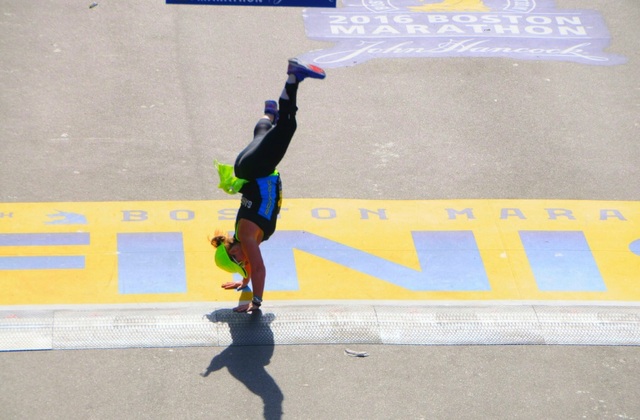 Just a year after her diagnosis, Garrett ran in her first Boston Marathon, running in memory of her sister who passed away just months before. "I was broken; I didn't think I could do it. . . . [But] running ended up helping me through the grieving process," she says.

Now, she's set out to finish the six World Champion Marathons. But after completing the Boston, New York City, and Chicago marathons and qualifying for the Berlin, Garrett knew it would take a miracle for her to actually run the race.

"I'd been saving all year for my trip to the Berlin Marathon," Garrett says. But after buying an airline ticket, Garrett realized she wouldn't have enough money to afford a room in Berlin.

"Heartbroken at the thought of not going, especially after training hard for six months [and] being lucky enough to get into the marathon . . . I took to my knees and prayed to my Heavenly Father."

Garrett prayed that her next paycheck might include a bonus, but when she opened the envelope, her "stomach dropped." She wasn't going to make it to the fourth marathon on her list.

Until the unexpected happened.

"A couple days later my friend surprisesd me and showed up at my work with a very sweet card and money from my friends within the ward," Garrett says. "I was brought to tears. . . . But my pride and stubborness were having a hard time accepting it. I didn't want to be a 'charity case.'"

But that same day, Garrett received a message from her Stake Relief Society President that changed her mind:

"[She] said she too was sending me a check. When I told her she didn't need to do that she responded:

'You are loved and we all support you. You inspire us all. Heavenly Father tries to answer prayers you have. I am sure you have prayed. But He needs to use people to get the job done. So let Him do His work, so He can bless you and those that have prayed to help those He would have them help. I don't know if I can say it right. But I know Heavenly Father loves you. Let him bless you and us.'" 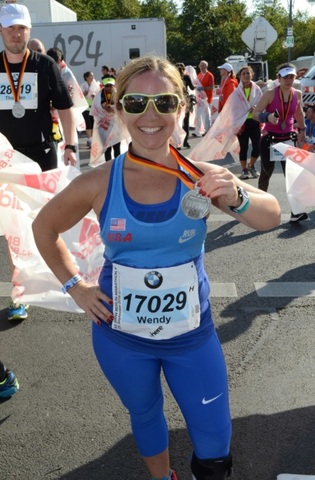 Garrett went to Berlin—finishing her eighth marathon after the accident, her fourth of the World Championship Marathons. And though she will always remember her race in Berlin, Garrett can never forget the lesson she learned from those who helped her get there.

"I had prayed," Garrett says about the experience. "But as a typical stubborn human, I had prayed for it to be done in my own specific way, not the Lord's way. So when my way wasn't answered, I was disappointed. But the Lord answered my prayer in his own way. . . . How many times do we pray asking for specifics because we think we know best? This has taught me to trust in the Lord more and change the way I pray. How many times have any of us prayed for something thinking the prayer was unanswered, when instead the Lord answered our prayers in the way he saw fit?"

But this wasn't the only time Garrett's prayer had been answered in an unexpected way.

"Following [my] accident I was given a blessing, and [the priesthood holder] used the words 'patient' and 'patience' literally a hundred times," Garrett says. "At the time we had no idea what I was going to endure . . . but my Heavenly Father knew otherwise. . . . That just proved to me that my Heavenly Father was aware of me, what I was going through, and what I was going to have to go through. . . . I was told things in those blessings only He could have known. It made me realize it was a trial I had to go through and that He was in control of what was happening."

Mormon Life Prayer MarathonPrayer,Marathon,Mormon Life
Comments and feedback can be sent to feedback@ldsliving.com