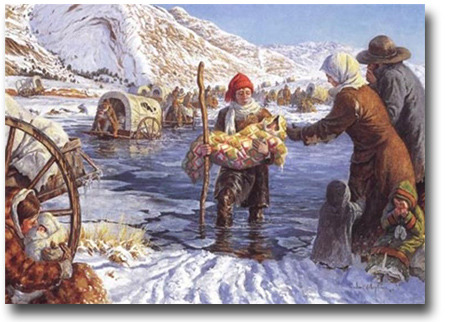 Pioneer Day, The Sweetwater Rescue, and the Role of History in Mormonism

While I generally like to challenge–if not completely burst–historical myths, both in and outside the classroom, I sincerely hesitated to write and publish this post on Pioneer Day. I don’t like being an iconoclast for iconoclasm’s sake. But in hearing the story discussed below several times over the last week (including in the ward I am currently attending, in the classroom, in the Ensign, and even on the internet), I thought this was an issue that needed to be addressed. Thus, I hope that the discussion is more sophisticated than merely degenerating into “average Mormons don’t know diddley squat about history.” That would, indeed, be missing the point.

Everyone knows the traditional story of the Sweetwater Rescue–and I imagine that most readers of this blog know the problems with it. In November, 1846, the beleaguered Martin Handcart Company reached the Sweetwater River in Wyoming. Plagued by a late start, they faced terrible weather conditions that slowed them down and made the trek nearly unbearable. Brigham Young, when hearing of their plight, sent out rescuers to help them finish the final leg of their migration. The rest of the story is the stuff of legend.