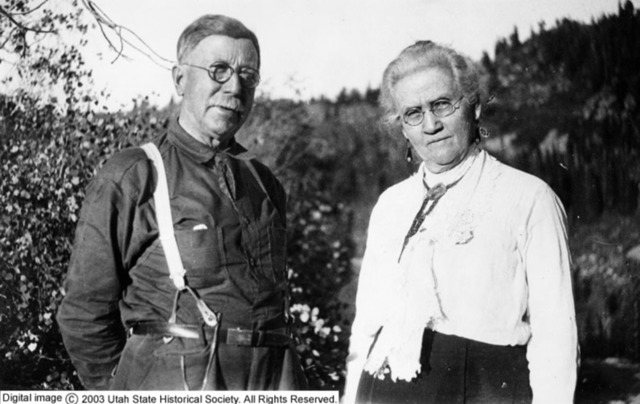 Editor's note: "Scenes from Saints" is a series of articles highlighting interesting facts from the second volume of Saints. This is the third article in the series. Part one shares facts about the building of the St. George, Logan, and Salt Lake temples, and part two shares facts about early missionary work. Articles will be posted weekly during November and December 2020. You can purchase both volumes ofSaints through Deseret Book or read and listen to the volumes on the Gospel Library app under the “Restoration and Church History” section.

Saints, Volume 2: No Unhallowed Hand, is chock full of the good and bad that came with settling in Utah and living a new religion, covering everything from building temples and growing missionary work to struggles with polygamy, details surrounding the horrifying events of the Mountain Meadows Massacre, and glimpses into the lives of members from Europe to the islands. Here are five insights into pioneer perspectives on temple sealings and plural marriage that you can learn more about in this new volume.

1. Early Saints were not sealed to parents who weren’t members of the Church.

“Some Saints also gathered into special adoptive families. At this time, Saints were not sealed to their deceased parents if their parents had not joined the Church in this life. Before leaving Nauvoo, Brigham had therefore encouraged around two hundred Saints to be sealed, or spiritually adopted, as sons and daughters into the families of Church leaders who were friends or mentors in the gospel.”

2. Joseph F. Smith was a Church historian for a time and researched plural marriage.

“Over the last three years, Joseph F. had also understood more about how his uncle and father responded to the grave dangers they faced in Nauvoo. To defend themselves and the Church against critics, they had sometimes deflected rumors of plural marriage in Nauvoo by publishing statements that carefully denounced false practices without condemning the authorized practice itself. Their caution helped explain why almost no written evidence existed to connect the prophet and Hyrum to the practice.

“To remedy this gap in the historical record, Joseph F. began collecting signed statements from people who had been involved in early plural marriages. Some of the women he spoke to had been sealed to Joseph Smith for this life and the next. Others had been sealed to the prophet for eternity alone. Joseph F. also gathered information about what his aunt Emma knew about the practice. His oldest sister, Lovina, had lived with Emma for a time after most of the Saints had traveled west. She testified that Emma had once told her that she consented to and witnessed her husband’s sealings to some of his plural wives.”

Learn more about why Joseph F. Smith was anxious to gather history about plural marriage in chapter 24.

3. One of Brigham Young’s daughters, Susie, wanted to go on a speaking tour with two of her father's wives to promote a book about Latter-day Saint women.

“Recently, Saints had published a book in New York City called The Women of Mormondom to counter the depictions of Latter-day Saint women found in the books and lectures of Fanny Stenhouse, Ann Eliza Young, and other critics of the Church. The Women of Mormondom contained the testimonies of several prominent women in the Church and presented their experiences in a positive light.

“To help promote the book, Susie wanted to go on a national speaking tour with two of her father’s wives, Eliza Snow and Zina Young, and her sister Zina Presendia Williams. Susie had always longed to be a great speaker and writer, and she was eager to travel the country and give lectures.”

Learn what happened before the tour could take place in chapter 29.

4. Divorce was complicated for early Latter-day Saints, but it did happen.

“After the death of her father, Susie Young Dunford struggled to know what to do about her failing marriage. When her husband, Alma, left on a mission, she had hoped the experience would change him. But he continued to be angry and defensive in his letters to her.

“Not wanting to act rashly, Susie considered her options, praying continually about her dilemma. Shortly before his death, her father had reminded her that the roles of wife and mother were central to her success in life. Susie wanted to fulfill those roles righteously. But did that mean she had to stay in an abusive marriage?

“One night, Susie dreamed that she and Alma were visiting her father in the Lion House. Brigham had an assignment for them, but rather than give it to Alma, as he usually did when he was alive, he gave it to Susie. As she left to fulfill the assignment, Susie encountered Eliza Snow in the hall. Why had her father given her the assignment, Susie asked, when he had always asked Alma in the past?

“‘He did not understand then,’ Eliza said in the dream. ‘But he does now.’

“Eliza’s words lingered with Susie after she awoke. It was a comfort to realize that her father might have a different perspective in the spirit world than he had in life.

“Susie filed for divorce soon after, and Alma returned from England and began consulting lawyers.”

5. One Latter-day Saint who was arrested under government bigamy laws had his garments confiscated in prison, though they were later returned to him.

“After a four-day train ride, George Reynolds arrived at the Nebraska state prison, about nine hundred miles east of Salt Lake City, to serve his two-year sentence for bigamy. Inside, the guards confiscated his possessions, including his clothes and temple garments. After he bathed, they cut his hair short and shaved off his beard.

“He was assigned a cell and given a coarse shirt, a pair of shoes, a cap, and a blue-and-white-striped prison uniform. Three times a day, Reynolds was marched with the other prisoners in silence to the food table, where he would retrieve his meal and then return to his cell to eat alone. After a few days, prison officials gave back his garments, and he felt grateful that his religious beliefs were respected at least in this regard.”

Read more about the legal difficulties George, his wives, and other Saints who practiced plural marriage had in chapter 31.

Lead image of Susa Young and her husband, Jacob F. Gates, who she later married after her divorce from Alma. Photo from the Utah State Historical Society.

Saints, Vol. 2: No Unhallowed Hand covers Church history from 1846 through 1893. Volume 2 narrates the Saints’ expulsion from Nauvoo, their challenges in gathering to the western United States and their efforts to settle Utah's Wasatch Front. The second volume concludes with the dedication of the Salt Lake Temple.