3 Crucial Ways to Prepare Spiritually for the Second Coming

byBrent L. Top, excerpted from "Watch and Be Ready: Preparing Spiritually for the Second Coming of Christ" | Aug. 03, 2018

Despite apostolic warnings and repeated admonishments to avoid becoming caught up with Second Coming sensationalism and apocalyptic alarm, there have been many in every generation that assume the answer to the age-old question “When will He come again?” is “Now.”

It is understandable. Signs appear before our eyes like leaves on the summer fig tree (see Matthew 24:32–33). Prophecies seem to be fulfilled. It is quite natural to assume that the day has arrived. It has been so in every generation. Like the illusive mirage on a hot highway—always appearing before us, but always beyond our reach—the signs of the Second Coming are ever before our eyes.

Political events on the world stage, popular movies or books, or someone’s reported visions or spiritual experiences always generate some degree of sensational speculation and what I call “Second Coming anxiety.”

► You May Also Like: 5 Things You Should Know About the Second Coming

For example, at the outbreak of the Gulf War in 1991 (and subsequent wars in the region), I heard members of the Church speculate that it was the commencement of the battle of Armageddon. With the close of 1999 and the dawn of the new millennium came all kinds of concerns and speculation. The year 2000 seemed to hold some mystical power in the minds of many, perhaps because of their interpretation of the “seven seals” prophecy of John the Revelator. Then there was the Mayan calendar craze that supposedly established 2012 as the year, December the month, and the 21st the day of the end of the world. That has come and gone, but I have seen “revisions” explaining that they misread the calendar and that 2015 was the “real date.” But that year has also come and gone.

We all wonder and wait and look forward to His coming. We, like the Savior’s ancient disciples, want to know when that day will be. Although we may wonder, we must remember that neither science, signs, nor speculation can adequately answer that age-old question. Only the Savior Himself can provide the answer. But here are some ways we can prepare spiritually for the Second Coming.

In the Joseph Smith Translation of Matthew 24, we read that as Jesus spoke of the signs that would precede His Second Coming, He warned of “false Christs, and false prophets [who] shall show great signs and wonders, insomuch, that, if possible, they shall deceive the very elect, who are the elect according to the covenant” (JS—M 1:22). That is a frightening thought that can further exacerbate “Second Coming anxiety.”

How can the Lord’s disciples today “abide” that day without faltering and falling, even as they are assaulted by false prophets with their deceptive and destructive philosophies, as well as mockers and persecutors from the great and spacious building? There is a safeguard: “And whoso treasureth up my word,” the Lord promised, “shall not be deceived” (JS—M 1:37). The scriptures indeed have power to insulate us against the “fiery darts of the adversary” (1 Nephi 15:24).

My wife, Wendy, had an experience many years ago with a would-be prophet who tried to teach her false doctrine and draw her into his circle of influence. One day, a man called her expressing great interest in an article she had published. He wanted her to know that he had some special insight into the subject. He called a few times to discuss it with her, giving her only bits and pieces of his so-called experiences but not enough to trigger any serious concerns. Finally, he asked to meet with her at my office to share his message and see if she showed any interest. Being polite, she agreed.

When he came to the Joseph Smith Building on the BYU campus, we met him on the first floor. Curiously, he had a woman, not his wife, with him. As we chatted on the way upstairs to my office, we learned that she believed in what he had to say and had recently quit her job at Church headquarters to help this man spread his message.

He proceeded to tell us of a special revelation he had received on the subject in question, all of which contradicted specific teachings in the scriptures. Our “scripture antennae” went up! We pointed out several relevant passages. Dismissing those scriptures, he told us that he had met with one of the apostles and was told that he was commissioned to share his teachings secretly. Immediately, more scriptures came to our minds. Early in the history of the Church, the Saints were taught that there could be no secret teachings. Only those leaders publicly accepted by common consent had authority to preach to the Church (see D&C 42:11–12). Further, only the prophet had authority to receive revelation for the Church (see D&C 43:1–7). Thus, it was easy for Wendy to reject this man’s claim that he had received some special commission to deliver secret teachings or practices to members of the Church.

► You May Also Like: Why Church Members Need to Stop Obsessing Over the Second Coming

Though my wife and I have a fairly extensive background in the scriptures because we teach and write about them, I believe you don’t necessarily have to know exact scripture references to know when someone is teaching false doctrine. If you make a continual, sincere effort to study and apply the scriptures in your life and in your family, the Spirit will make you feel uncomfortable when false doctrine is taught. We find that almost all faithful members of the Church have this spiritual intuition. It is not available to only a select few but can be cultivated by every member. Even children can have it. What we must do is become firmly grounded in the scriptures. We are also blessed to have prophets, seers, and revelators whose right it is to interpret scriptures; they can help us to better understand them and to apply their teachings to our own lives.

Seek Refuge from the Storm

In April 1838, amidst the Missouri persecutions, the Prophet Joseph Smith received a revelation at Far West that identified the official name of the Church as we have it today. In that revelation, the Lord spoke of the Church and its stakes as gathering places that would be “for a defense, and for a refuge from the storm, and from wrath when it shall be poured out without mixture upon the whole earth” (D&C 115:6). In 1831, in an inspired prayer canonized as section 65 of the Doctrine and Covenants, the Prophet declared that the Church, the kingdom of God “which is set up on the earth,” is to prepare the world “for the days to come, in the which the Son of Man shall come down in heaven, clothed in the brightness of his glory” (D&C 65:5). Thus, the Church becomes a “holy place,” a protective place, for those who are willing to put down their roots deep into the soil of the gospel found within the Church community.

Several years ago, when I was serving as president of the Illinois Peoria Mission, I had an experience that graphically taught how the Church is a “refuge from the storm.” During a stake conference, just as the presiding general authority began his instruction, the stake president received an urgent message informing him that a tornado was headed dangerously close to the church building.

The presiding authority, choosing wisdom as the better part of valor, dismissed the congregation from the chapel and cultural hall to the inside hallways, where the strength of the roof and walls would provide the most protection. Needless to say, it was a unique experience for all who were present, and it was perhaps the most memorable stake conference I have attended. After a short while, the “all’s clear” signal was sounded, and we went back into the chapel to continue the conference. When we left the church building after the conference ended, we noticed that there had been considerable danger and damage in the surrounding neighborhoods. But for the several hundred Saints in the church building that day, there was protection and peace, knowing we were standing in a “holy place.”

► You May Also Like: 4 Signs of the Second Coming That Will Make You More Optimistic

I recognize that sometimes dedicated church buildings are indeed damaged or even destroyed by natural disasters. Temples have been flooded; chapels have been struck by lightning or destroyed by fire. I am not saying that church buildings, as dedicated holy places of the Lord, will never suffer physical damage. What I am saying is that those physical edifices are tangible reminders of very real spiritual promises the Lord has given His Saints. That day, in that place and at that time, the physical integrity of the church building was strong enough to protect against the powerful storm outside. It was a powerful reminder to us that the spiritual strength of the Church—its doctrines, ordinances, programs, support ministry, service opportunities, and faithful fellowship with caring brothers and sisters in the gospel—provides protection against the wrath that is “poured out without mixture upon the whole earth” (D&C 115:6). Likewise, the Church, with all its God-given powers, prepares us for the Second Coming of Jesus Christ.

Both the New Testament apostle John the Beloved and the Book of Mormon prophet Mormon testified that when the Savior returns to earth in resplendent glory, the “true followers” of Christ who will greet Him will “be like Him” (Moroni 7:48; see also 1 John 3:2). Interestingly, both John and Mormon taught this principle in the context of epistles regarding charity, defined as the “pure love of Christ,” which, among all Christlike attributes, “is the greatest of all . . . and whoso is found possessed of it at the last day, it shall be well with him” (Moroni 7:46–47; see also 1 Corinthians 13). So what does the “pure love of Christ” have to do with our spiritual preparation for the Second Coming? In a word, everything.

He is the Bridegroom whom we, with love and long-suffering, seek to greet. It is for His return that we prepare, as President Spencer W. Kimball taught, “drop by drop in righteous living.” It is only through pure love—both His love for us and our love for Him—that we can become what we need to be to abide the “great and dreadful day of the Lord.” It is within the “holy places” in which we stand where we learn of His love, experience the transforming power of His love, and demonstrate our love. Becoming His disciples, standing with Him in holy places, and loving others as He loves us enable us to have our “lamps trimmed” and filled with oil so that “when He shall appear we shall be like Him.”

This story originally appeared in the July/August 2018 issue of LDS Living Magazine. 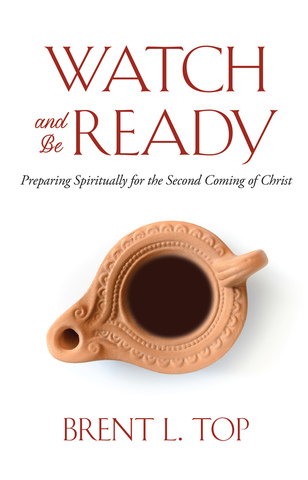 A popular speaker at BYU Education Week and other events and firesides, Brent L. Top teaches us to focus less on when the event will take place and more on how we are living in preparation for it. By reviewing key scriptures and parables about the Second Coming, this book helps us understand what we need to know in our day and illustrates how daily spiritual preparedness blesses us and our families right now, not just at the Second Coming.