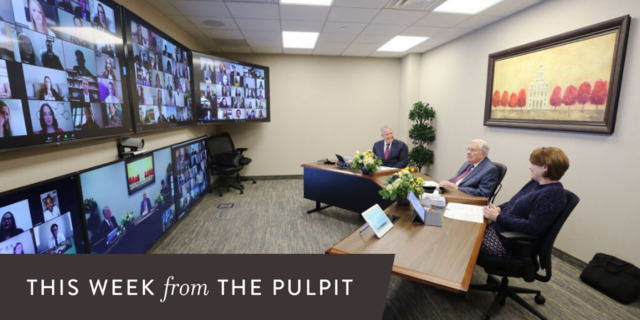 Editor’s note: “This week from the Pulpit” highlights recent messages by General Authorities and General Officers of the Church.

Looking at screens dotted with the faces of young adults from across North America on Sunday evening, President M. Russell Ballard said the images filled him with confidence for the future, and he promised that even amid dark times, there is hope and light.

“May the Lord bless you, my beloved young people, with the realization now of how very important you are for the future of The Church of Jesus Christ of Latter-day Saints,” he said. “Do not underestimate what the Lord has ahead for you.”

President Ballard, Acting President of the Quorum of the Twelve Apostles, asked the young adults to defend, build and strengthen the Church. “We have great confidence in the future of the Church because we have you,” he said.

Speaking to young adults from Newcastle to Novosibirsk and from Copenhagen to Cape Town, Elder Jeffrey R. Holland began his message by clarifying that his purpose was not to “recruit” them to attend institute.

Rather than inviting them to “take institute,” Elder Holland invited young adults to allow institute to “take” them—closer to God and to His words in the scriptures.

Despite living in a “crazy world” filled with uncertainty, wars, rumors of wars, crime, terrorism, tragedies, natural disasters and disappointments, Sister Cristina B. Franco invited BYU–Idaho students to “be of good cheer” and to live without fear. 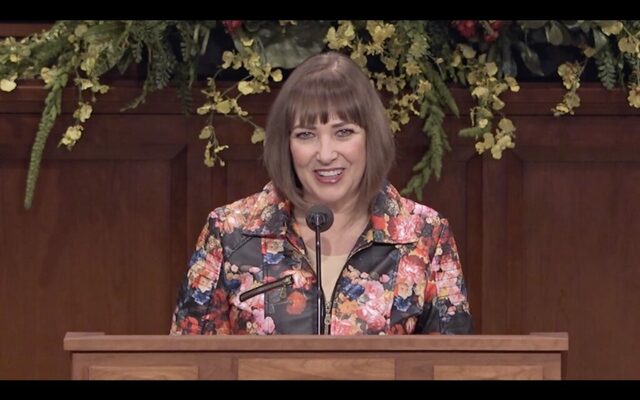 Speaking in the weekly campus devotional broadcast on Tuesday, March 9, the Primary general leader told students to take comfort in the Lord’s promise found in Doctrine and Covenants 68:6: “Wherefore, be of good cheer, and do not fear, for I the Lord am with you, and will stand by you; and ye shall bear record of me, even Jesus Christ, that I am the Son of the living God, that I was, that I am, and that I am to come.”

As an Argentine-born, native Spanish speaker, Sister Franco said she decided to look up in the English dictionary the topic of her remarks. She learned “to be of good cheer is to be happy. It is that simple! Right?”

She then shared four elements that have helped her find happiness in spite of outward circumstances.

There is a tendency to over-compartmentalize one’s life, separating personal life from Church life, school life or work life, and thinking they can never mix. Many think they can’t even talk about religion at work—where most people will spend more than half of their waking hours.

This separation is a mistake and “causes us to miss out on blessings and opportunities to bless others,” Elder Mark A. Bragg, General Authority Seventy, said during his Ensign College devotional address broadcast on March 9.

“There is no doubt that we can freely share who we are in every aspect of our lives.”

Read the full article where Elder Bragg talks about faith, hope, and charity at Church News.

► You may also like: On International Women's Day, President Bingham addresses 'one of the greatest impediments' daughters of God face