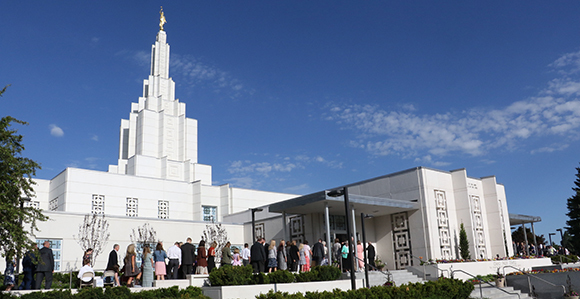 “This is a place where you can take the steps that lead to eternal life and a return home again to our Heavenly Father," President Eyring said.

It was June 5, 1976, and President Henry B. Eyring and his wife, Sister Kathleen Eyring, were at the Idaho Falls Temple attending the wedding of some young friends.

It was a joyous occasion. But as the Eyrings were leaving the temple they learned troubling news.

“The temple matron whispered to my wife, ‘The Teton Dam has broken and a wall of water is heading toward Rexburg,’” he told the Church News.

The Eyrings had reason to be worried. They lived in Rexburg and their children had remained at home while they visited the temple.

The Teton Dam break was so treacherous that the police did not allow the Eyrings to make the short drive home to Rexburg. They had no choice but to find overnight lodging in an Idaho Falls motel.

Jerrold and Ruth Stallings of Ammon, Idaho, attended the dedication of the Idaho Falls Idaho Temple in 1945. They returned for the June 4, 2017, rededication. Sister Stallings is holding her tickets from both events. Photo by Jason Swensen.

President Henry B. Eyring, First Counselor in the First Presidency, at the Idaho Falls Idaho Temple, June 3 and 4, 2017.

Despite the uncertainty, President Eyring slept well that night. The Idaho Falls temple had taught them the comforting lessons of family and eternity.

“I knew it was going to be okay,” he said. “Those feelings that we had in the temple were real. We knew those children were ours. That night we had a feeling of peace.”

President Eyring is just one of the many Latter-day Saints who have found peace, comfort, and life-guiding instruction within the walls of the Idaho Falls Idaho Temple.

Dedicated in 1945, it was the Church’s eighth temple and the first such edifice in Idaho. It remains one of the most easily recognizable LDS temples because of its mixed-Art Deco exterior, proximity to the Snake River, and, of course, the eponymous falls.

But in 2015—after seven decades of daily service—Church officials decided to close the Idaho Falls temple for extensive renovations.

Now the “Temple by the River” is back.

On June 4, President Eyring and many others participated in the much-anticipated rededication of the Idaho Falls Idaho Temple. The building was rededicated in three sessions on a warm late-Spring Sabbath Day.