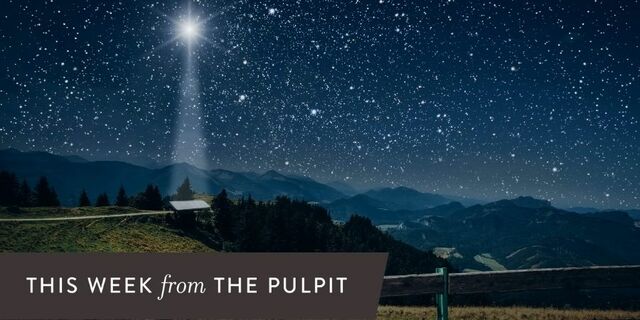 Editor’s note: “This week from the pulpit” highlights recent messages from General Authorities, General Officers, and leaders of the Church.

As we conclude the highly anticipated week of Christmas, we celebrate the Light of the World. This year December 21st marked not only the winter solstice but the appearance of a star that hadn’t appeared in nearly 400 years. And both President Russell M. Nelson, Sister Michelle Craig, and Elder Dale G. Renlund drew attention to the symbolism surrounding the holiday season and the physical light that exists in our world at this time of the year.

On Monday, President Nelson wrote, “How fitting that astronomers and scientists are predicting tonight’s appearance of a ‘Christmas star,’ formed by the great conjunction of Saturn and Jupiter, a rare event not seen in nearly 400 years. While we don’t need to ascribe any special meaning to the actual phenomenon, tonight’s Christmas star will undoubtedly draw our minds and hearts to the original star that appeared in the heavens to mark the birth of our Savior Jesus Christ. For the shepherds in Judea, for the Wise Men, and for the believers in the New World, the star brought more than mere physical light—it brought hope.”

Tonight, December 21, is the winter solstice, regarded in many traditions as the darkest and longest night of the year....Posted by Russell M. Nelson on Monday, December 21, 2020

After addressing the world growing darker earlier in the evening at this time of year, Sister Michelle D. Craig shared a piece of art by artist Eva Timothy titled “Gift of Light.”

“He is the one that shares His light with us so that we can then share it with others,” Sister Craig said. “I love reading in the scriptures how every person was blessed by an interaction with Jesus Christ; He affirmed identity, He challenged those around Him to be the very best versions of themselves, and He went out of His way to lift and to bless. He saw the one. He was a giver of light.”

In some parts of the world, including where I live, it is getting darker earlier in the evening—we have less daylight...Posted by Michelle D. Craig on Sunday, December 20, 2020

Elder Dale G. Renlund shared his thoughts after looking at conjunction of Saturn and Jupiter.

Last evening we enjoyed looking at the conjunction of Saturn and Jupiter in the night sky with millions of other people....Posted by Dale G. Renlund on Tuesday, December 22, 2020

This story has been updated as more posts have become available.

I feel the spirit of Christmas as I read the Savior’s words. I feel the light, the optimism, and the witness that come...Posted by Henry B. Eyring on Sunday, December 20, 2020

A favorite part of Christmas is putting up Nativities, also known as creches, throughout our home. In their community...Posted by Gerrit W. Gong on Monday, December 21, 2020

My husband and I love to read Christmas stories with our grandchildren. We always read the account of Jesus’s birth in...Posted by Cristina B. Franco on Tuesday, December 22, 2020