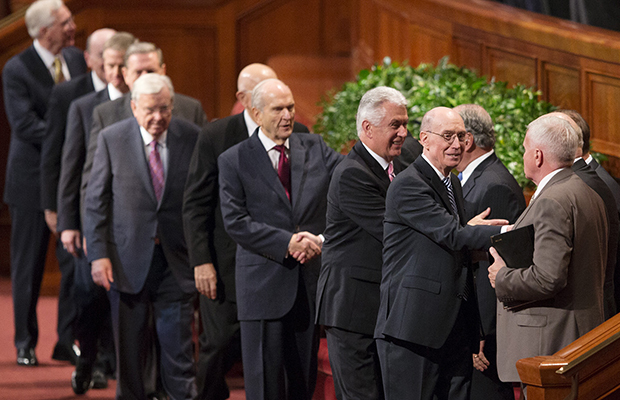 In a January 2021 article in the Liahona, President Russell M. Nelson shared a message on receiving revelation. Reflecting on one of his own personal experiences, the prophet wrote about a time when he was guided by the Spirit to check on the late Elder Robert D. Hales, who had previously suffered a heart attack.

Although President Nelson, then President of the Quorum of the Twelve Apostles, had just visited Elder Hales in the hospital that day and it seemed he had been improving, the Spirit spoke to his mind and heart that he should visit Elder Hales again the following day.

That Sunday was the morning session of the October 2017 general conference. But the strong impression returned during that session, and President Nelson heeded the prompting.

“I felt that I should skip lunch and hurry to Elder Hales’s bedside as soon as the morning session ended, which I did,” President Nelson wrote. “When I arrived, I could see that Elder Hales had taken a serious turn for the worse. Sadly, he passed away 10 minutes after I arrived, but I am thankful that I was at his side with his sweet wife, Mary, and their two sons when he departed this life.”

In the article, President Nelson encouraged readers to understand how the Spirit speaks to each of them. Explaining the process of receiving personal revelation, he also promised that “God will speak to us in His own way and in His own time.”

Read more of President Nelson’s thoughts about revelation in the Liahona.