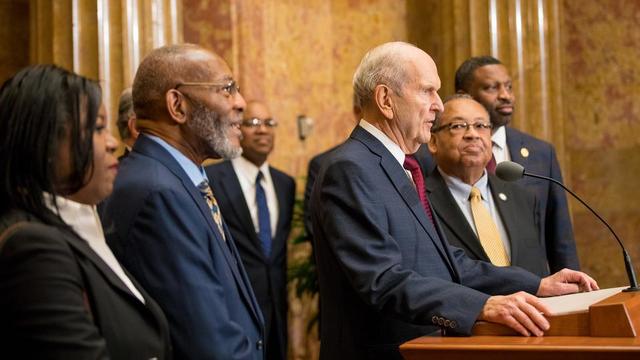 President Nelson to Speak at 2019 NAACP National Convention in Detroit

President Russell M. Nelson of The Church of Jesus Christ of Latter-day Saints will address the 110th annual national convention for the National Association for the Advancement of Colored People (NAACP) July 21, 2019, in Detroit, Michigan. Newsroom will publish multimedia resources and President Nelson’s full transcript.

Over the past 18 months, the First Presidency has made its partnership with the NAACP a high priority. The groups have met several times to pursue a joint education and employment initiative that has been deployed in Chicago, San Francisco, Houston and Charlotte. They have customized the Church’s self-reliance services materials and programs to be most effective for the initiative. The two organizations also came together on Temple Square last May to call all people, organizations and governments to work together to achieve greater civility and racial harmony. Last July, Elder Jack N. Gerard of the Seventy spoke at the NAACP 109th annual convention in San Antonio, Texas.

“I’m honored to have The Church of Jesus Christ of Latter-day Saints stand in unity with the NAACP to advance equality and justice for all,” said NAACP President and CEO Derrick Johnson. “We must recognize and accept the importance of creating amity with those that are raising the consciousness of this nation — the Church is committed to doing just that.”

Since becoming president of the Church in 2018, the prophet has made clear in word and deed his desire to be a bridge builder with all peoples, faiths, cultures and communities.

“Only the comprehension of the true Fatherhood of God can bring full appreciation of the true brotherhood of men and the true sisterhood of women,” President Russell M. Nelson said during a major celebration of diversity and oneness in the Church in 2018. “That understanding inspires us with passionate desire to build bridges of cooperation instead of walls of segregation.”

Lead image of President Russell M. Nelson making a joint statement with Derrick Johnson, president and CEO of the NAACP, in the Church Administration Building in Salt Lake City, May 17, 2018.