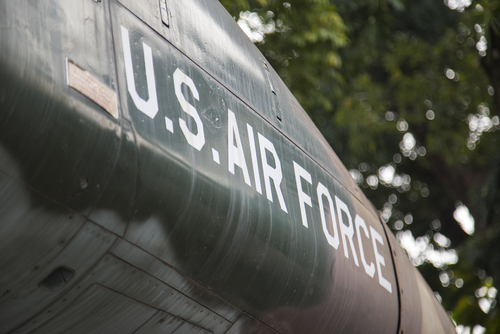 I was a 29-year-old United States Air Force fighter pilot, hanging from a parachute, slowly descending into hostile territory. I looked below my dangling legs as I watched my doomed F-4 Phantom shudder, shake, and cartwheel its fiery way to the ground. Missing its tail section and a large part of the left wing, it was now totally engulfed in flames. It was hard to imagine I had been sitting in the cockpit, at the very center of the fireball, a few seconds before. Finally, I saw it hit the ground with a huge concussion that I could see but not hear. The fire and smoke reached into the sky several thousand feet. I thought for a few seconds how unlikely it was for a small-town Texas boy to be involved in such a monumental problem as this was turning into.

I had been hit by a heat-seeking missile from an unseen MiG-21. Now my survival training overcame my shock, and I did a quick inventory of my physical condition and that of my equipment. My chute was fine, with only one or two blown panels, and my injuries were minor—a small cut in the right corner of my mouth from the bayonet on my oxygen mask that had come loose in the ejection. I looked above me, saw two F-4s circling, and reached for my survival radio to get out one last message before I became the newest prisoner of war in this long and complicated conflict called the Vietnam War. “This is Bass Zero Two Alpha. I’m in a chute. I’m A-OK. See you after the war.” I wanted my family to know that I was in good physical condition and still had an optimistic outlook. I would be fine. I wanted my family to have this message to bear them up.

►You'll also like: Powerful Stories of Military Service from the First Presidency

Now I shifted focus to the immediate problems. I was coming down in an area where I knew there would be no rescue attempt. I was drifting toward the ground into one of the most hostile and feared nations on the earth. I was on my own, and I would be either killed or captured by an enemy I knew to be ruthless.

A few months before I was shot down on July 5, 1972, I had been assigned a new roommate. Our squadron was housed with two pilots to each room, and we got to know each other pretty well. My new roommate was quite different from the typical fighter pilot. He didn’t drink, smoke, use profanity, or display the arrogant swagger characteristic of most fighter pilots I knew. Lee was a young, friendly lieutenant who smiled a lot and had a genuine interest in others.

Although our schedules conflicted most of the time, we got to know each other quickly. I was very interested to learn that Lee was a member of The Church of Jesus Christ of Latter-day Saints. I had never known a Mormon before or really had a chance to learn about that faith. There was subtle pressure to conform to the common ways of doing things in our squadron, but Lee did not adjust his principles. I admired him for having the courage to conduct himself according to his beliefs. In the short time we had together, we discussed the subject of religion. I had been raised a Protestant and was intrigued by the simple way that Lee was able to discuss his religion. I learned that he had served a two-year mission for his church and was impressed by his sincere interest in explaining the principles of his faith. I learned of the First Vision and of the Prophet Joseph Smith. I remember that it seemed quite a tall tale to me at first. Lee also gave me a copy of the Book of Mormon and explained how he believed this book to be scripture, along with the Holy Bible. I had read about 30 pages in the book before I was shot down.

►You'll also like: What Prophets Have Said About War

The most interesting thing about my discussions with Lee was the time he invited me to attend a “family home evening” with some of the other few members of the Church stationed at our base in Thailand. We met with this group of 10 or so members only once before I was shot down. Lee and I were the only officers in the group. The thing about this group that impressed me the most was the way they related to each other. There was no superficial military relationship to get in the way of true communication. In fact, they called each other “Brother.” I felt the genuine feeling of love and concern they had for each other. I had never experienced that kind of relationship between officers and enlisted men to that degree before that time. It was unique, and it made a lasting, positive impression on me.

As a direct result of these positive feelings I had toward my experience with Lee and his “brothers,” I joined the Church in 1976, some three years after being repatriated to this great nation. Two young missionaries knocked on my door when I was stationed in Florida, and as a result of the good feelings I had about what I had learned of the Church, I let them into my home. I did the simple things they asked me to do and finished reading the Book of Mormon on Christmas Day of that year. The testimony I gained from that first reading has never left me.

One of the greatest experiences of my life was on June 26, 2000, as I rose out of the waters of baptism as proxy for my father, who had passed away. June 26 was his birthday, and I could not control my emotions as I felt his spirit accept this ordinance. Those in the baptismal font had to wait several minutes while I regained control of my emotions. Finally, I was able to share with them the feelings I had, the love I felt for my father, and the sure knowledge that he had just accepted this ordinance. I did not tell them how close all of this came to never happening, how close I had come to being destroyed by an enemy far away some 28 years before. 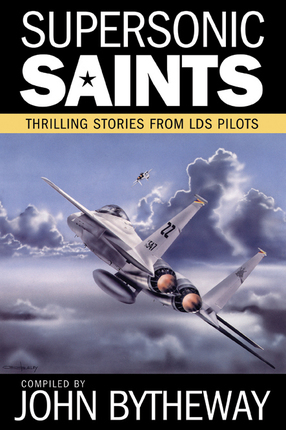 Riveting and faith-promoting, Supersonic Saints is a collection of more than 15 true stories of LDS pilots who felt the hand of the Lord in their lives when they needed it most. Many of these pilots are still active in the United States Armed Forces. All of them are active members of The Church of Jesus Christ of Latter-day Saints.