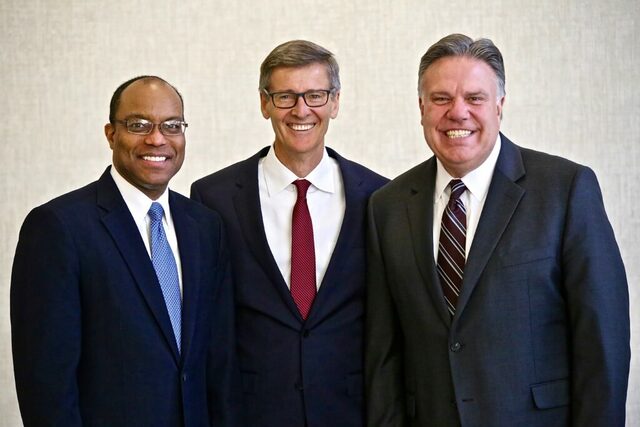 The name “Bradley R. Wilcox” may have sounded familiar to many Latter-day Saints when he was announced as a member of the new Young Men general presidency in general conference, and rightly so. Brother Wilcox is widely known for his work at BYU and as a speaker and an author. President Steven J. Lund and Brother Ahmad S. Corbitt, however, are newer names to most Latter-day Saints. A brief question and answer session helps introduce the new presidency by showing their excitement over their new calling.

Speaking of the new youth program, President Lund said, “It’s always exciting to be part of invention. Creation is a noble endeavor—and we’re creating something that hasn’t existed in the Church. It’s fun to be in the middle of that.”

The presidency discussed the challenges youth face today and how leaders can help them.

The combined strength of young men and young women was also highlighted. President Lund expressed a desire for young men and women to collaborate and lean on each other. He said, “The best asset that most young men in the Church have are the young women in their wards. And the strongest asset those young women have are the young men they work with.” Brother Corbitt adds, "We feel the same unity with the Young Women general presidency that we feel within our own presidency, and also with the Primary general presidency. We all want to see what we can do to facilitate the success of God’s children—from childhood to adulthood."

Read the rest of the article on Church News.