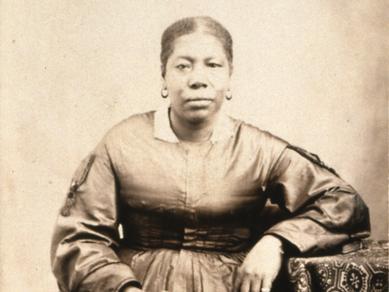 The Church’s history with race is complex and controversial. Here is a look at the priesthood and temple bans, the “curses” associated with dark skin, and the evolution of LDS beliefs and doctrine.

Even though the majority of Mormons were white in the 19th century, the white Protestant majority in America persistently suggested that they did not act or look “white” and that they were more like other marginalized racial groups. The scientific and medical communities even suggested that Mormon polygamy was spawning a new, degraded race. Ostracized for both its religious beliefs and its marital practices, the Church moved unevenly toward whiteness across the course of the 19th century in an attempt to achieve social respectability in America—an evolution that came at the expense of fellow black Saints until 1978, when the Church reversed course and returned to its racially universalistic roots.

A racially expansive vision of redemption through Jesus Christ for all of God’s children marked the early decades of the Church’s existence. One early leader, W.W. Phelps, wrote in 1835 that “all the families of the earth . . . should get redemption . . . in Christ Jesus,” regardless of “whether they are descendants of Shem, Ham, or Japeth.” Apostle Parley P. Pratt similarly professed his intent to preach “to all people, kindreds, tongues, and nations without any exception” and included India’s and Africa’s “sultry plains” in his vision of the global reach of Mormonism.

Joseph Smith received at least four revelations instructing him that “the gospel must be preached unto every creature”; these were unambiguous declarations that signaled the global mandate early Saints felt called to fulfill (see D&C 58:64; see also 68:8, 84:62, 112:28).

The universal gospel invitation initially extended all of the unfolding ordinances of the Restoration to all members. To date, there are no known statements made by Joseph Smith Jr. of a racial priesthood or temple restriction. So how did ideas about racial inequality in the Church evolve?

Whiteness in American History and Culture

Being white in American history was considered the normal and natural condition of humankind. Anything “less than” white was viewed as a deterioration from normal—a situation that made such a person unfit for the blessings of democracy. Being white meant being socially respectable; it granted a person greater access to political, economic, and social power. In the 1800s, however, “race” was a word loosely used to refer to nationality as much as skin color. People spoke of an “Irish race,” for example, and began to create a hierarchy of racial identities, with Anglo-Saxons at the top.

Mormonism was born in this era of splintering whiteness and did not escape its consequences. The Protestant majority in America was never quite certain how or where to situate Mormons within conflicting racial schemes, but they were nonetheless convinced that Mormonism represented a racial decline. Many 19th-century social evolutionists believed in the development theory: all societies advanced across three stages of progress, from savagery to barbarism to civilization.

As societies advanced, they left behind such practices as polygamy and adherence to authoritarian rule. In the minds of such thinkers, Mormons violated the development theory by practicing polygamy and theocracy—something that no true Anglo-Saxon would do. Mormons thereby represented a fearful racial descent into barbarism and savagery. Within this charged racial context, Mormons struggled to claim “whiteness” for themselves despite the fact that they were overwhelmingly of northern and western European descent.

The Saints’ troubled sojourns in Ohio, Missouri, and Illinois were fraught with the perception that Mormons were too open and inviting to undesirable people—blacks and Indians in particular. In 1830, the founding year of the Church, Black Pete became the first known African-American to join the faith.

Within a year of his conversion, the fact that the Mormons had a black man worshiping with them made news in New York and Pennsylvania. Edward Strutt Abdy, a British official on tour of the United States, noted that Ohio Mormons honored “the natural equality of mankind, without excepting the native Indians or the African race.” Abdy feared, however, that it was an open attitude that may have gone too far for its time and place. He believed that the Mormon stance toward Indians and blacks was at least partially responsible for “the cruel persecution by which [the Mormons] have suffered.” In his mind, the Book of Mormon ideal that “all are alike unto God,” including “black and white,” made it unlikely that the Saints would “remain unmolested in the State of Missouri.”

Other outsiders tended to agree. They complained that Mormons were far too inclusive in the creation of their religious kingdom. They accepted “all nations and colours,” they welcomed “all classes and characters,” and they included “aliens by birth” and people from “different parts of the world” as members of God’s earthly family. Outsiders variously suggested that the Mormons had “opened an asylum for rogues and vagabonds and free blacks,” maintained “communion with the Indians,” and walked out with “colored women.” In short, Mormons were charged with creating racially and economically diverse transnational communities and congregations—a stark contrast to a national culture that favored the segregation and extermination of undesirable racial groups.

Critics began suggesting that even white Saints were physically different than other white people, and as early as the 1840s, people were speaking of a less-white “Mormon race.” Then with the open announcement of polygamy in 1852, concern among outsiders moved in a new direction: toward a growing fear of racial contamination. In the minds of outsiders, Mormon polygamy was not just destroying the traditional family—it was destroying the white race. A U.S. Army doctor reported to Congress that polygamy was giving rise to a “new race,” filthy, sunken, and degraded. 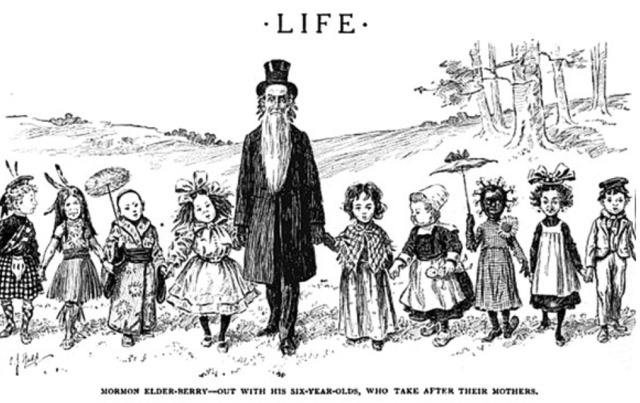 Cartoons sometimes portrayed Mormon polygamous families as interracial, and unabashedly so. In September 1896, during the presidential race between Democrat William Jennings Bryan and Republican William McKinley, Judge magazine ran one such cartoon. The illustration was titled “The 16 to 1 movement in Utah.” It used a contentious issue in the campaign that year to make fun of polygamy. Bryan advocated freeing the nation’s monetary system from the gold standard by allowing for the coinage of silver at a ratio of 16 to 1. In the Judge cartoon, however, 16 to 1 took on a new meaning in Utah: 16 women to 1 man. The polygamist man carried a bag labeled “from Utah” and stood front and center of his 16 wives, 8 on either side. It was not merely the number of women to men, however, that made the cartoon significant. It was the interracial nature of the Mormon family it depicted. The 16 wives were portrayed in a variety of shapes, sizes, and relative beauty, but it was the first wife holding the man’s left arm that was meant to unsettle its audience. She was a black woman boldly at the front of the other wives—a visual depiction of the racial corruption that outsiders worried was inherent in Mormon polygamy.