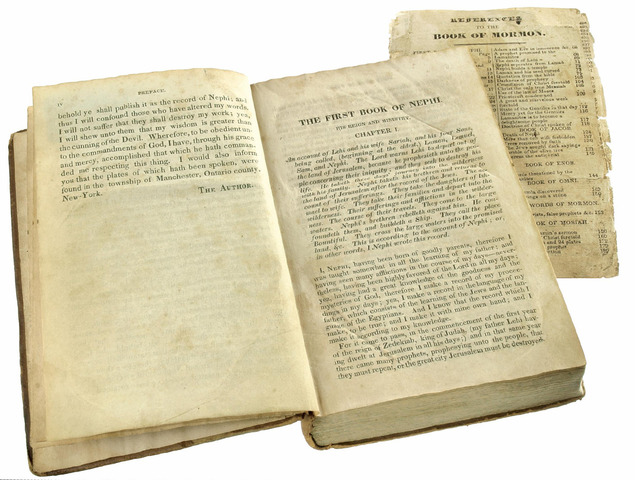 A rare first edition Book of Mormon has been sold for $100,000 through Heritage Auction to an internet bidder. One of 5,000 copies printed in 1830 by E.B. Grandin in Palmyra, New York, this Book of Mormon once belonged to the foreman of the printing press, Pomeroy Tucker, according to Heritage Auctions' website. 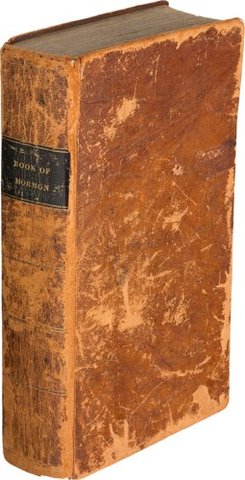 The book contains several of Tucker's pencil markings and annotations, as well as the following inscription, written in ink:

Man of sterling worth

and true and loyal friend

grandson of Pomeroy Tucker, in whose print shop this book was produced" 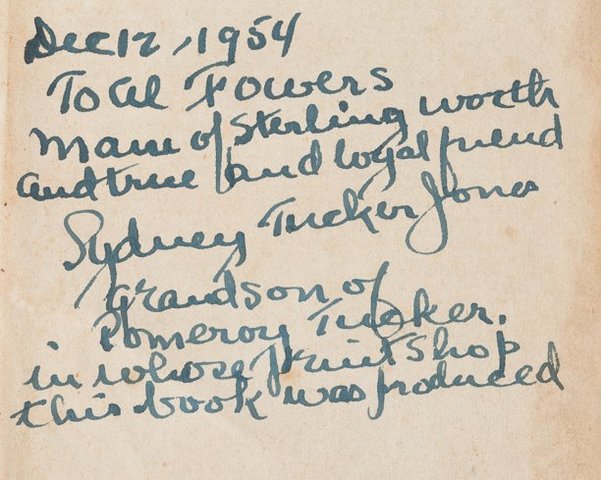 This copy also contains a typewritten letter signed by Sydney Tucker Jones Jr. and dated September 29, 1858. It is addressed to Mr. Alfred J. Fowers and explains, "At the time of Dad's funeral, you spoke to me how pleased you were to have a copy of the Mormon Bible that he gave you. You might be interested to know that my Dad's Grandfather apparently had some part in the printing of the original Book of Mormon. Mr. Pomeroy Tucker, born August 10, 1802, at Elmira, New York, died June 30, 1870, at Elmira, was the Father of Alice Louise Tucker who married Andrew B. Jones, my Dad's Father."

Pomeroy Tucker was foreman of the press at E.B. Grandin when the Book of Mormon was being printed and was involved in its printing and proofreading. He later became a journalist and a New York politician.

In 1867, he published Origin, Rise, and Progress of Mormonism. Biography of Its Founders and History of Its Church. The book was considered to be the most influential anti-Mormon work of its time.

Most of the passages marked in this copy of the Book of Mormon are passages Tucker quoted in his book. In addition, Tucker made several corrections to punctuation and capitalization. Several of the pencil corrections Tucker makes are implemented in later editions, Heritage Auctions states.

The first edition of the Book of Mormon is the only edition in which Joseph Smith is named as author. (He is listed as "translator" in all subsequent editions.) The first edition is also the only edition with the Prophet's two-page preface (pages [iii]-iv), in which he addressed false rumors about the Book of Mormon, briefly described how the 116 pages of the Book of Lehi were lost, and quoted the revelation concerning the missing manuscript. He writes:

To the Reader—
As many false reports have been circulated respecting the following work, and also many unlawful mea sures taken by evil designing persons to destroy me,  and also the work, I would inform you that I translated, by the gift and power of God, and caused to be written,  one hundred and sixteen pages, the which I took from  the Book of Lehi, which was an account abridged from  the plates of Lehi, by the hand of Mormon; which said account, some person or persons have stolen and kept  from me, notwithstanding my utmost exertions to reco ver it again—and being commanded of the Lord that  I should not translate the same over again, for Satan  had put it into their hearts to tempt the Lord their God,  by altering the words, that they did read contrary from that which I translated and caused to be written; and  if I should bring forth the same words again, or, in other  words, if I should translate the same over again, they  would publish that which they had stolen, and Satan  would stir up the hearts of this generation, that they  might not receive this work: but behold, the Lord  said unto me, I will not suffer that Satan shall accom plish his evil design in this thing: therefore thou shalt  translate from the plates of Nephi, until ye come to that  which ye have translated, which ye have retained; and behold ye shall publish it as the record of Nephi; and  thus I will confound those who have altered my words.  I will not suffer that they shall destroy my work; yea,  I will shew unto them that my wisdom is greater than  the cunning of the Devil. Wherefore, to be obedient un to the commandments of God, I have, through his grace and mercy, accomplished that which he hath comman ded me respecting this thing. I would also inform  you that the plates of which hath been spoken, were  found in the township of Manchester, Ontario county, New-York. 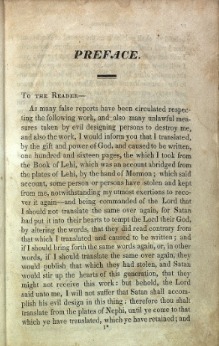 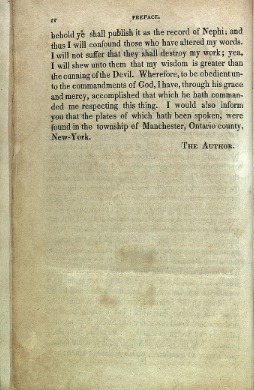 To learn more about the history of the Book of Mormon, visit josephsmithpapers.org. 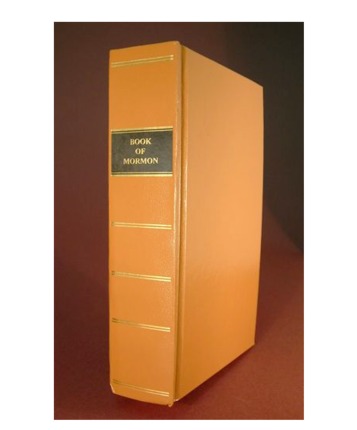 Get your own an exact facsimile reproduction of the first edition of the Book of Mormon! Authentic size, look, feel, and format of the original.