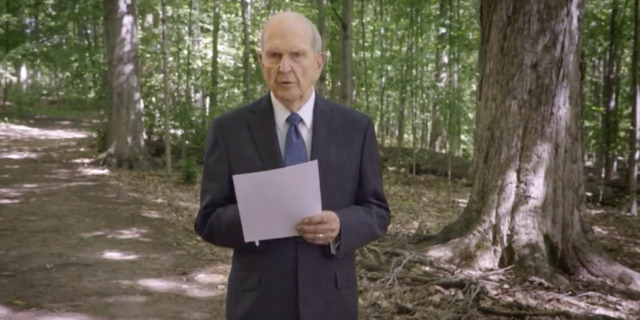 Read the New Proclamation: The Restoration of the Fulness of the Gospel of Jesus Christ

During the Sunday morning session of April 2020 General Conference, President Russell M. Nelson announced a new proclamation, "The Restoration of the Fulness of the Gospel of Jesus Christ: A Bicentennial Proclamation to the World." Read the new proclamation in its entirety below.

The Restoration of the Fulness of the Gospel of Jesus Christ: A Bicentennial Proclamation to the World

We solemnly proclaim that God loves His children in every nation of the world. God the Father has given us the divine birth, the incomparable life, and the infinite atoning sacrifice of His Beloved Son, Jesus Christ. By the power of the Father, Jesus rose again and gained the victory over death. He is our Savior, our Exemplar, and our Redeemer.

Two hundred years ago, on a beautiful spring morning in 1820, young Joseph Smith, seeking to know which church to join, went into the woods to pray near his home in upstate New York, USA. He had questions regarding the salvation of his soul and trusted that God would direct him.

In humility, we declare that in answer to his prayer, God the Father and His Son, Jesus Christ, appeared to Joseph and inaugurated the “restitution of all things” as foretold in the Bible. In this vision, he learned that following the death of the original Apostles, Christ’s New Testament Church was lost from the earth. Joseph would be instrumental in its return.

We affirm that under the direction of the Father and the Son, heavenly messengers came to instruct Joseph and re-establish the Church of Jesus Christ. The resurrected John the Baptist restored the authority to baptize by immersion for the remission of sins. Three of the original twelve Apostles—Peter, James, and John—restored the apostleship and keys of priesthood authority. Others came as well, including Elijah, who restored the authority to join families together forever in eternal relationships that transcend death.

We further witness that Joseph Smith was given the gift and power of God to translate an ancient record: the Book of Mormon—Another Testament of Jesus Christ. Pages of this sacred text include an account of the personal ministry of Jesus Christ among people in the Western Hemisphere soon after His Resurrection. It teaches of life’s purpose and explains the doctrine of Christ, which is central to that purpose. As a companion scripture to the Bible, the Book of Mormon testifies that all human beings are sons and daughters of a loving Father in Heaven, that He has a divine plan for our lives, and that His Son, Jesus Christ, speaks today as well as in days of old.

We declare that The Church of Jesus Christ of Latter-day Saints, organized on April 6, 1830, is Christ’s New Testament Church restored. This Church is anchored in the perfect life of its chief cornerstone, Jesus Christ, and in His infinite Atonement and literal Resurrection. Jesus Christ has once again called Apostles and has given them priesthood authority. He invites all of us to come unto Him and His Church, to receive the Holy Ghost, the ordinances of salvation, and to gain enduring joy.

Two hundred years have now elapsed since this Restoration was initiated by God the Father and His Beloved Son, Jesus Christ. Millions throughout the world have embraced a knowledge of these prophesied events.

We gladly declare that the promised Restoration goes forward through continuing revelation. The earth will never again be the same, as God will “gather together in one all things in Christ.”

With reverence and gratitude, we as His Apostles invite all to know—as we do—that the heavens are open. We affirm that God is making known His will for His beloved sons and daughters. We testify that those who prayerfully study the message of the Restoration and act in faith will be blessed to gain their own witness of its divinity and of its purpose to prepare the world for the promised Second Coming of our Lord and Savior, Jesus Christ.

► You may also like: What Are the 6 Proclamations that Have Been Issued in Church History? 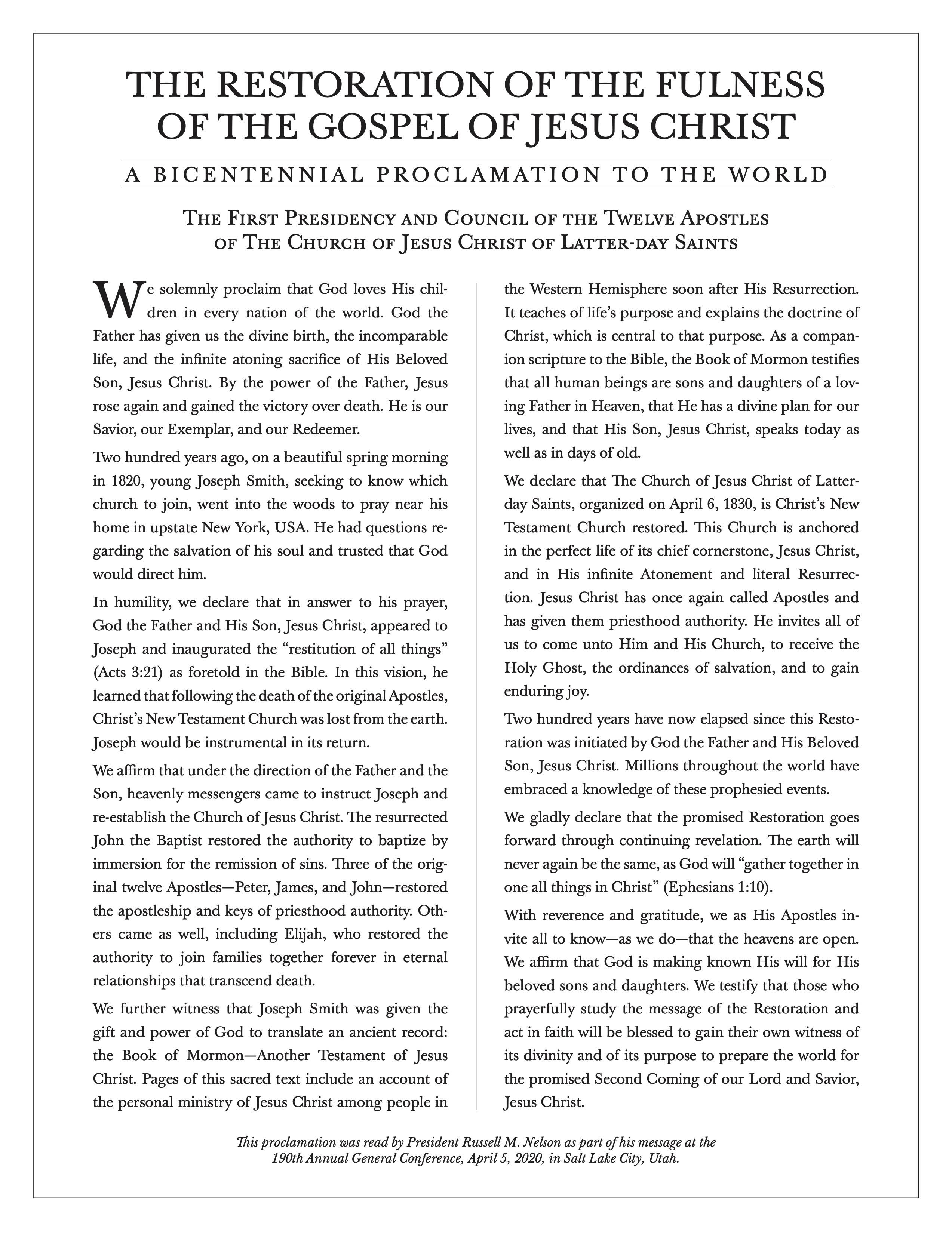