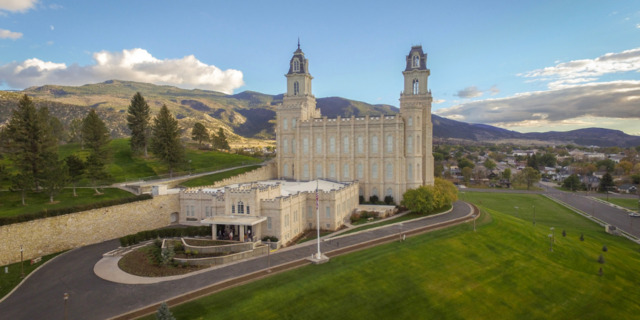 Rejoicing ‘on both sides of the veil’: 12 highlights from the Ephraim temple announcement and revision to Manti renovation plans

In a prerecorded message shown at a press conference held at the Manti Tabernacle and broadcast to all 23 stakes in the Manti Utah Temple district, President Russell M. Nelson shared plans for a new temple in Ephraim, Utah.

“After much study and prayer, and with deep gratitude for the Lord's responding to our pleadings, I am pleased to announce that we have been impressed to build a new temple in Ephraim, Utah,” President Nelson said. “These decisions will expand future opportunities for members in this temple district to participate in sacred temple ordinances and at the same time allow us to preserve the unique classical character and useful life of the historic Manti Utah Temple.”

Elder Ronald A. Rasband said two words come to mind because of the announcement: joy and rejoicing. 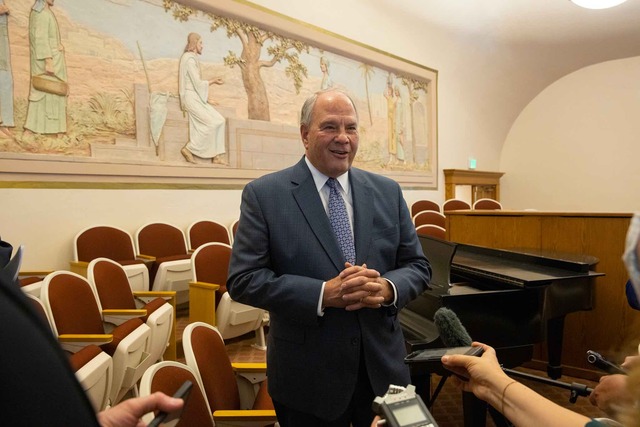 “I have great joy in my heart this morning knowing that the Lord God Almighty is smiling down on the Manti temple district—all of you Saints who live in this district from the north to the south to the east to the west,” Elder Rasband said. “I’m reminded of a scripture from the Old Testament this morning, the prophet Amos where he said, ‘Surely the Lord God will do nothing but he revealeth his secret unto his servants the prophets’ (Amos 3:7).’”

Elder Rasband described that he was privileged to be with President Nelson shortly after he received this distinct impression.

Elder Rasband testified, “What we have just heard from our loving prophet is the mind and the will and the direction of the Lord Jesus Christ. So I add my joy and rejoicing to yours this morning.”

The temple in Ephraim, Utah, will be a special blessing to the students of Snow College.

Elder Kevin R. Duncan of the Seventy, who serves as the Executive Director of the Temple Department, highlighted the blessing of having the new temple in the same town as Snow College.

“My feelings of excitement actually come from President Nelson,” Elder Duncan said. “I was with him when he started talking about this and what excited him and what excites me is a temple next to Snow College or very close to Snow College. When you look at a place like Rexburg and what that’s done to those students—you look at a place where other students can go, not just attend the temple, but serve in the temple. . . . When [the temple has] young ordinance workers it just brings a different, wonderful, vibrant feeling, and that’s what excites me the most.”

Jacob Semadeni, a Snow College student, remarked what an incredible blessing this will be.

“What a huge opportunity, but the second thought is how big of a responsibility for stake presidents and the institute as well, because we have a people that needs to be prepared,” Semadeni said. And though Semadeni will have graduated once the temple is built, he said that it’s a privilege to help get people ready for when it’s built and to help establish Zion.

In terms of size, the temple in Ephraim, Utah will be comparable to the Brigham City Utah Temple.

The new temple in Ephraim will be comparable in size to the Brigham City Utah Temple with four endowment rooms with 30 seats, three sealing rooms, and one baptismal font. It is anticipated endowment sessions will begin every 30 minutes, which will increase the capacity and opportunity for the 61,000 members of the Manti temple district to worship and serve in the temple.

The temple in Ephraim, Utah, will take approximately two years to build.

A site has not yet been selected.

“We have continued to seek direction of the Lord on this matter,” President Nelson said. “We have been impressed to modify our earlier plans for Manti Utah Temple so that the pioneer craftsmanship, artwork, and character will be preserved including the painted murals loved by so many. We will leave those murals where they are located now inside the Manti Utah Temple.”

The Manti temple renovation will begin on October 1, 2021.

“This work will require that each temple be closed for a period of time,” President Nelson said in conference. “Church members may continue to enjoy temple worship and service in other temples nearby. When each project is completed, each historic temple will be rededicated.”

Elder Duncan said there will be an open house after the Manti temple renovation.

The Manti temple renovation is estimated to be completed in 18–24 months.

“We’re happy that the renovation will not be so extensive, that it won’t be closed for a long time because it is a very dear temple to a lot of people,” Elder Duncan said. “They want to come here for sealings, they are connected to it. So we are happy that it won’t be real extensive, maybe 18–24 months and it will be done.  It’s really nice to preserve all of that pioneer craftsmanship and the murals.”

The Manti temple will continue to have progressive rooms.

The managing director of the Special Projects Department, Brent Roberts, detailed some of the renovation plans for the Manti temple. Similar to the Mesa Arizona Temple and the Cardston Alberta Temple, the Manti Utah Temple will be progressive. A film will replace the current live presentation of the endowment, meaning all temples of the Church will use a film for the endowment ceremony.

The ordinances of the temple will be available in 90 languages at the Manti temple.

Discontinuing live sessions means people can attend the temple in over 90 languages.

“President Nelson truly is a prophet to the world and his concern is for all of God’s children,” Bishop W. Christopher Waddell said. “When you think of the iconic nature of the Salt Lake Temple of the Manti Temple, people in 90 languages . . . for them to be able to enter and to see the beauty of it and to see what the pioneers have done—and many of whom that will come are pioneers themselves, that are first- or second-generation members of the Church—to go in and in their language to be able to participate is just a remarkable thing.”

Church leaders testified about the process of revelation by which the announcement came about.

Bishop Waddell said President Nelson had been praying about the Manti temple. A variety of options had been presented, and the answer came to build Ephraim and preserve Manti.

The Church has now announced 252 temples.

Temple construction continues to be guided by revelation. Bishop Waddell said it’s not just temples in Ephraim and Manti, it’s all of the temples around the world.

“There are lots of things that are taking place with temple design that is reducing the time it takes to design temples [and] to build temples all over the world,” Bishop Waddell said. “ For example, the Helena Montana Temple—it was just announced and it will be probably available for dedication in about 13 months and that’s because of some design features that are happening.”

The temple announcement occurred on the 175th anniversary of the original Nauvoo Temple dedication.

The announcement took place on May 1, 2021. On May 1, 1846, the original Nauvoo temple was dedicated, even though portions of the temple were unfinished.

“As a pioneer descendant, you can only imagine that I use those two words again, great joy and rejoicing,” Elder Rasband said. “And I think of President Nelson’s oft-used comment of our need to do the gathering on both sides of the veil. I have a very deep impression today that not only is there rejoicing in this temple district with this announcement today, but there is rejoicing on the other side of the veil from many of our ancestors, who in my family’s case even lost their lives in that journey from Denmark to Ephraim, Utah, so it is a day of rejoicing and joy—may I be so bold as to say—on both sides of the veil.”

Find additional coverage of the announcement from Church News and Deseret News.