A returned missionary going back to visit the country where they served? Normal. Moving there, earning a spot on a professional soccer team, touring nearly the entire country as a back-up dancer, and then starting a movement that involves running down the entire coast of the country picking up tons (literally tons) of trash along the way? Not so normal. But that is exactly what Clayton Thomas Kearl is doing.

In February of 2016, Clayton’s dad granted his son's wish and handed him a one-way ticket to Peru. Clayton knew he wanted to get back to the country he had grown to love on his mission, but he had no idea what he was going to do when the plane landed.

“My Dad handed me the ticket and said, ‘You say that you really want to move to Peru and you want to do something, so figure it out. And the moment you think you’re going to call me and ask for money, don’t. Figure it out,’” says Clayton. “So he gave me that one-way ticket, and I basically went with that message.”

Of that day in the airport, Clayton's father, Thomas Kearl remembers, “I trusted Clayton that his intentions were good and that he had a stewardship that he felt responsible to pursue. So, as always, I’ve been willing to help all of my children, in any pursuit that was virtuous, lovely, or of good report. So I really didn’t worry because I trusted in him completely.”

Three years later, Clayton has become a celebrity of sorts in Peru, known by his hundreds of thousands of Peruvian social media followers as Gr3ngasho. Now, he is using that influence to fuel a cause he is passionate about: cleaning up the trash that covers much of the country he loves. The movement is called Chapa Tu Basura: Peruvian slang for “pick up your trash.” 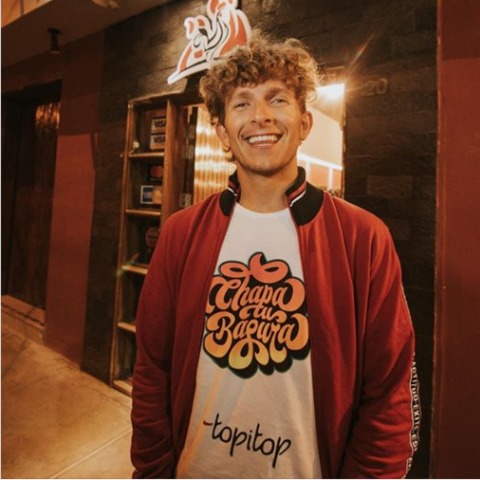 “The idea of Chapa Tu Basura is to come in with joy, happiness, excitement, and to teach the people. In Peru, it’s trendy to go to the beach and do a beach clean-up, but only the beach. No one talks about neighborhoods or littering or on the side of the highway—where there’s way more trash than on the beach. The culture of throwing trash wherever needs to stop,” says Clayton.

With help from donations from his followers, friends, and family, Clayton is on a mission to run from the border of Peru and Ecuador to the border of Peru and Chile—a distance of over 1500 miles. By going 15 miles a day, Clayton aims to complete his goal in about four months. As he runs through major cities, Clayton and his team organize clean-up events by reaching out to Clayton’s followers on social media.

“I’m blown away that I can post a story on Instagram, and 30 to 60 people will come to pick up trash for two hours with me,” says Clayton. 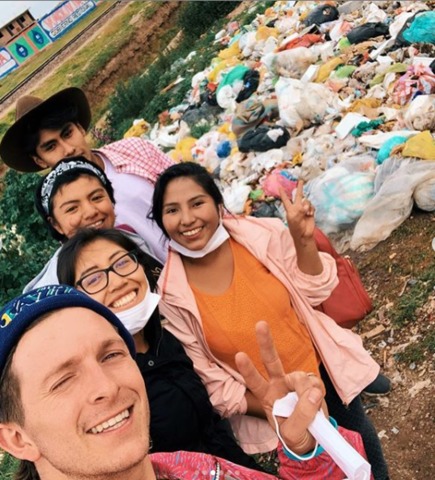 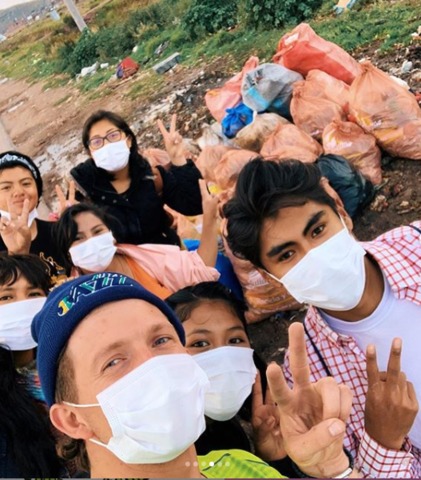 The Road to Fame

So what was Clayton up to during his first few years in Peru to establish that sort of following? Well, that's quite the story. When he first arrived in Lima, Clayton was living with a mission companion. He had been a scholarship athlete at BYU-Hawaii, running cross country and playing soccer, and was out training on a soccer field one morning when someone approached him and encouraged him to try-out for a second division professional team. Clayton did so and made the team. When it came time to sign a contract, however, he lacked the necessary paperwork and had to walk away. “I was basically back to ground zero,” he says.

A contact of his then suggested that Clayton should try and work for a radio station. He started visiting the station and was invited to interview, which led to him going back there every day for two months. During the process of working at the radio station, Clayton was recruited into a band and he became a back-up dancer.

“Music production, singing, dance is huge in my family. Typical Sunday evening at the Kearl house is my mom screaming 5,6,7,8 and my sisters laying out the choreography for a number they're going to do in my mom’s musical. My dad is an amazing singer, who loves to take over any karaoke bar this side of the planet, and I guess you mix all that up and you’ve got this,” explains Clayton. “So, when I was introduced to Latin music and Latin dancing it was a perfect, happy fit.”

The next seven months would be spent touring 24 of the 28 states in Peru, gaining fans and followers along the way.

“In those seven months, it was, ‘I have no idea what I’m doing next.’ My mom would ask, ‘Okay, so what are you doing? What’s going on?’ But when you’re in a band you can’t really think two weeks ahead of time,” says Clayton.

Eventually, his time as a backup dancer came to an abrupt end. After one trip that consisted of 12 hours in a tour bus to play at a two a.m. concert, Clayton was told that he needed to get back in the van and drive 28 hours to the next show. Deciding he had had enough, Clayton grabbed his duffel bag and didn’t get back on the bus. Luckily, the band was in a city Clayton had served in on his mission, so he had somewhere to spend the night.

Soon after that, Clayton's first year in Peru came to a close, and he flew home to Utah to spend Christmas with his family.

“While I was home, I got this crazy idea. With this following I had generated from being in the band, I hit up a bunch of companies, raised 7,500 dollars, and me and three buddies jumped in a van. In the next four months, we went through 13 countries, driving from Utah to Peru,” says Clayton.

Once back in Peru, Clayton launched a YouTube video of him talking about why he thinks Peru is the best country. To his surprise, the video went viral, reaching four million views. Clayton’s social media accounts were flooded with messages from news agencies in Peru requesting interviews. And that was just the beginning. Clayton’s YouTube channel now has millions of views on a wide variety of videos.

“Behind the madness of doing these videos, I have videos with millions of views that are just pranks that are strictly comedy. But behind the curtains I always knew that I was building this following to do something big,” says Clayton.

►You'll also like: Returned Missionary Stuns Judges on "Project Runway" + Why He Credits God and His Mom for His Success

That “something big” took shape through several experiences in Clayton’s life. First, he said he remembers thinking about Peru’s trash problem “a lot” while a missionary. Later, he saw first-hand how much trash is by the highways throughout Latin America during his four-month drive from Utah to Peru. He also had a unique experience while on a bus to Machu Picchu that is seared in his mind forever.

Some friends from BYU-Hawaii had come to visit Clayton, and the group was riding on a bus to hike Machu Picchu for their first time. As they passed through towns on the way, people would come on the bus selling food—all of it wrapped in plastic baggies. Clayton watched what happened after a Peruvian family bought and ate their lunch on that bus.

“As if it was yesterday, I can tell you exactly how this went.  The dad ordered food, and as soon as the one little girl finished her apple pie, she gave the dad her garbage, and he opened the window and chucked it out,” says Clayton. “Here’s the biggest catch: as soon as the dad did that, all five kids, it was like a mama duck and the little kids following, all the kids wiped their faces, put the plastic in a ball, opened the window and boom, boom, boom—out the window.”

These experiences, combined with a love for the Peruvian people, now have Clayton committed to running 15 miles down the coast every day for the next four months.

►You'll also like: How a Piece of Trash Led to My Conversion in Prison

“Other than my mission, this is the most insane, incredible, hardest thing I’ve ever done in my life. To wake up and run 13 to 15 miles every day takes a special kind of beast,” says Clayton.

But as with most difficult experiences, personal growth and blessings come along the way.

“When you’re out in the middle of the desert, and it’s just you the moon, the stars, and the highway, semis flying by, it’s definitely spiritual. You definitely feel like you have conversations with Heavenly Father. You feel the spirit. You think of what you’re doing right now, what you’re going to do tomorrow, what you want to do. I mean you’ve got three hours on the pavement, what are you going to think about?” says Clayton.

Clayton isn’t the only one experiencing a deepening perspective. His mom, who Clayton refers to as his “biggest fan,” has also been impacted by her son’s journey in Peru.

Happy Mothers Day ❤️ I have no idea how you did it all mom... Full time mom of 4 very active incredible human beings...! Homework, music lessons, sports and dance practice, Not an easy task not to mention taking on the musical and a position at the school and now getting your masters degree👏🏼👏🏼 Someone please tell me how you do it all. I Love you mom and look up to you more than you know and understand and I miss you everyday! Not a day goes by I don’t think about you and the things you have taught me! Love you mama bear 🐻

“I think the one question that each of needs to ask, and I’ve been asking myself this more and more as I’ve watched Clayton, is, ‘What are you going to do with what you’ve been given?’ There has to be a measure of what you do every day . . . that incorporates some kind of answer that helps you feel like you could answer that with a relative amount of accountability,” says Nanette Kearl. "Clayton has purpose and it really is igniting when you are with him."

In reflecting on an experience he had with one of Clayton's fans, his father says,

"Obviously there is a sense of joy in seeing your children accomplish their dreams and their goal, but I think in this case, it's more humbling. . . He had one of the general authorities tell him, 'Clayton you have a responsibility. You are an ambassador for the church everywhere you go.'"

Clayton is unsure of what life in the future will look like for him, but he does know that he wants Peru to play a big part in it. He says,

"Maybe the reason I was sent to Peru was to have not only a two-year impact on the people but a lifetime impact."

Lead image from a video on Clayton's Facebook Page