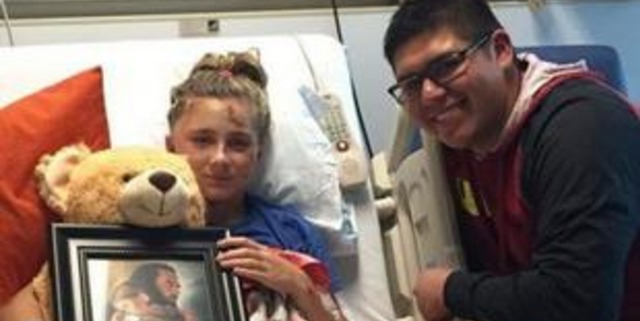 An LDS family who almost lost their daughter in a car accident and the returned missionary who caused it are both finding the miraculous healing that comes through Christ's atonement and forgiveness.

The holiday season has brought special feelings of gratitude, peace and healing to the home of Jason and Lisa Summers this year.

Over the past two years, three of their five family members have faced life-threatening situations, and all survived thanks to superb medical care, tremendous community support, great faith and endless prayers.

The most recent adversity came in September when the Summers’ 13-year-old daughter was seriously injured in an auto-pedestrian accident. Yet through a series of faith-promoting events, she is doing well today and on the road to recovery. The Summers family has also been able to forgive and develop an uncommon friendship with the young man responsible for the accident.

“We’ve prayed the last couple of years for our family to be closer, and the last two years we’ve had so many things happen,” Lisa Summers said. “Looking back, prayers were answered but not in the ways we anticipated.”

“The blessings we’ve been given, the lessons learned … don’t take your family for granted, cherish every day,” Jason Summers said. “These experiences have glued our family a little closer together.”

Around 6 p.m. on Sept. 29, Katelyn Summers was finishing cheer practice at Midland Square in downtown Tremonton. As parents, including Lisa Summers, began arriving to pick up their children, Katelyn and a group of girls prepared to cross Main Street. A Dodge pickup truck going west stopped in the left turn lane, and the driver motioned for the girls to cross the road, Lisa Summers said.

Unfortunately, this meant the girls were temporarily hidden from view to the westbound vehicles in the right lane.

At that moment, Juan Arteaga, 20, was traveling west in a black Chevy Cruze. He remembers being a little blinded by the low setting sun, and by the time he saw the girls, it was too late. His car collided with two girls; one sustained minor injuries, but Katelyn was thrown back more than 50 feet, according to Tremonton police.

Lisa Summers and her sons pulled up just in time to witness the accident. She ran to her daughter’s side. Her first impression was that Katelyn was dead.

“She was lifeless,” Lisa Summers said. “I went into shock mode: ‘I can’t believe this is happening.’”