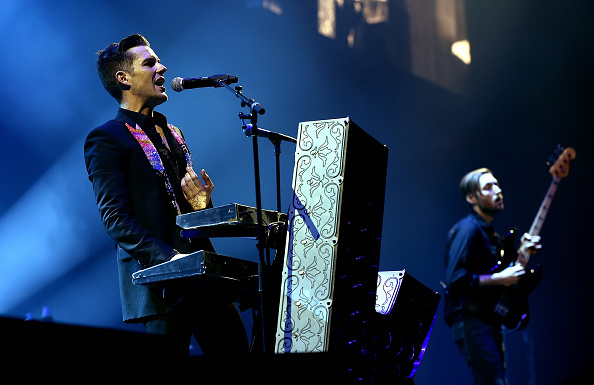 Editor’s note: Content of the songs referenced in this article may not be appropriate for all audiences.

Brandon Flowers, the front man of the American rock band The Killers, was interviewed on January 12 by Utah State University’s Religious Studies professor Dr. Patrick Mason on the podcast The Foyer.

LDS Living has previously published articles about Flowers, an active member of The Church of Jesus Christ of Latter-day Saints. But this event featuring Flowers on a faith-based podcast promised to be rarer than most, as it could prove to give unique insights about the singer’s beliefs. It did not disappoint, either—the singer spent an hour on the podcast openly testifying about his religious convictions and the spiritual significance behind the lyrics to many of his songs.

Before I highlight the episode, I feel it’s only fair to explain for context—I am a proud fan of The Killers. My love for their music began back when I was 16 years old and I attended my first real rock concert when they were touring for their album Day & Age. I was a new fan then, but after that night I became a loyal follower. I sang and shouted and jumped up and down with my sister and our friend, mesmerized by the music, the lights, and the confetti streaming down as Flowers sang the words, “If you can’t hold on, hold on.”

Since then, I’ve been to a total of four concerts by The Killers, including a quick, less-than-24-hour trip to see a show in Las Vegas. As a journalist, I’ve also written about him every opportunity I’ve had, including reviewing his Salt Lake City concert for the Deseret News in 2018.

But this is not the extent of my fandom—my sister Hailee and I long ago started a tradition of celebrating Flowers’s birthday on June 21. She is an even bigger fan than I am and even bought a Killers Christmas tree at Utah’s Festival of Trees. It is still up in our living room (much to our mother’s chagrin, I am sure, although she appreciates their music like the rest of us), despite the fact that we are two weeks into January.

But whether or not you are a superfan of The Killers like we are at my house, I found it enlightening to see how a rock star like Flowers, who has sold 28 million records with his band worldwide, puts his faith into words and song.

The Meaning Behind the Lyrics

In Imploding the Mirage, the latest album by The Killers, Flowers noted that there is a theme of him being reconciled to God and growing closer to his wife, who had been struggling with PTSD as of result of experiences from her childhood. Flowers said the album artwork by Thomas Blackshear was a source of inspiration for the lyrics and music. The piece depicts a desert landscape with a man and a woman hovering in the air, their bodies seamlessly a part of the clouds.

“Some days I look at it and I see Heavenly Father and Heavenly Mother, and other days I look at it and I see the potential for me and my wife. And that was where a lot of content on the record sprouted from,” Flowers said. “I saw the correlation between that and for us becoming those two people on the cover of the album, and how it was all sort of intertwined . . . as our family unit and us getting to this place. And so the lyrics started to form.”

His family’s Come, Follow Me studies of the New Testament in 2019 also influenced his writing, which is particularly evident in “Fire and Bone,” which incorporates the story of the prodigal son.

“When you get to that point of the son returning and the father seeing him and running out to meet him in the road and falling on his neck. . . . It just touches your heart, and I think we all see ourselves in the prodigal son. You know, we’re all beggars at some point. It’s just such a beautiful image.”

Flowers added that the song “My God” is a celebration of his wife overcoming her trials. The first track on Imploding the Mirage, “My Own Soul’s Warning,” also has religious notes in it. Flowers said that the  the lyrics, "What if it knew you by your name?" point to the idea of receiving revelation.

“We’re taught that the heavens are open, and that Heavenly Father knows us and loves us,” Flowers said. “The first word of the Restoration that was spoken by God was ‘Joseph.’ And you know, that’s so cool! The implications of that are so beautiful that He knows us. And I love the fact that He knows me and that He knows my sons and my wife and my family.”

Flowers added that his life has come full circle since his 2006 hit “When You Were Young,” which you can hear in “My Own Soul’s Warning.”

Regarding his solo album Flamingo, Flowers said the lyrics, “Mother, it’s cold here / Father, thy will be done,” is him speaking to his Heavenly Parents. The band U2 inspired him, he added, as they have previously described songs as being a form of prayer.

“I would describe it as a prayer. And you can really hear—we talk about becoming like a child and . . . I feel like this is me being contrite and coming to my [Heavenly] Parents and acknowledging that I need guidance.”

During the live recording, Mason, the host, invited listeners to send in questions about what they wanted to know, and my sister—yes, the one with the tree—even had one of her questions asked. To say we were excited to hear her question read is an understatement.

Her question was how Flowers gained a testimony of the Book of Mormon, and, once again, he pointed to Come, Follow Me bringing his family together and strengthening his beliefs of what he knows to be true.

“It’s one of those things that some people are converted over and over again, and I’ve had that experience in my life where I’ve really, really had a lot of conviction and then fade away a little bit, and then it comes back strong and then it goes away. But this last year, 2020, again going back to Come, Follow Me lessons, was just a beautiful thing, reading it with my family and we were able to—I guess because of Covid, there’s no excuse to not complete the thing. And we did it as a family and it strengthened my testimony in it, reading it with my kids and the moments that we shared—just at the dinner table, we’d read it—and there were so many times that we felt the Spirit bearing witness of the truthfulness of what we were reading, and it strengthened my testimony in it. And I’m sure more things like that will happen the more I read it.”

Flowers closed by speaking about what the Church means to him and his family, sharing how grateful he is for it in his life.

“There are responsibilities that come with being a part of the Church, but again, what they’ve done and how they bring me and our family unit together, you can’t put a price tag on it. And as much success as we’ve had, and as much as I love being onstage, the small moments that I have at home with my family eclipse those things. And so I’m just really lucky that I get to do all of this.”

Listen to the full podcast at The Foyer, where Flowers shares more about the lyrics in his music.