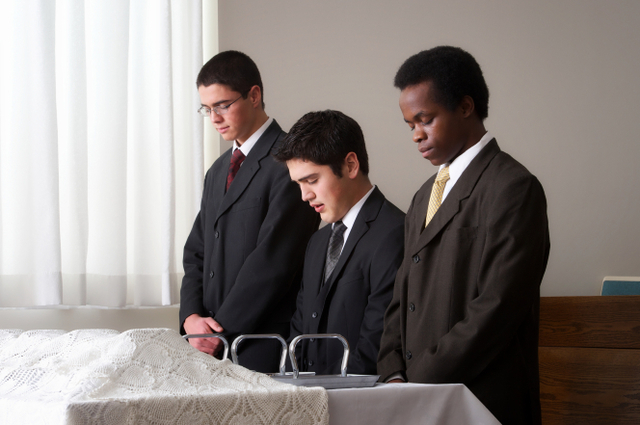 Thought: "In my judgment, the sacrament meeting is the most sacred, the most holy, of all the meetings of the Church. When I reflect upon the gathering of the Savior and his apostles on that memorable night when he introduced the sacrament . . . my heart is filled with wonderment and my feelings are touched. I consider that gathering one of the most solemn and wonderful since the beginning of time" (Joseph Fielding Smith, Conference Report, Oct. 1929, 60-61).

Scripture: "It is expedient that the church meet together often to partake of bread and wine in the remembrance of the Lord Jesus" (Doctrine and Covenants 20:75).

Story: In preparation for a religious service at which the sacrament of bread and wine was to be administered, Joseph Smith set out to procure wine for the occasion. He was met by a heavenly messenger and received the revelation that became the first four verses of section 27 of the Doctrine and Covenants (Section heading Doctrine and Covenants 27). In the early days of the Church, people who were baptized were later confirmed members of the Church in special meetings. An important focus of those "confirmation meetings" was that these new members would receive the sacrament for the first time. Joseph Smith recorded that the occasion leading to the revelation found in D&C 27 was one of these meetings: "Early in the month of August Newel Knight and his wife paid us a visit at my place in Harmony, Pennsylvania; and as neither his wife not mine had been as yet confirmed, it was proposed that we should confirm them and partake together of the Sacrament, before he and his wife should leave us" (History of the Church, 1:106). It was while Joseph was on his way to obtain wine for the occasion that he received the revelation (Dennis H. Leavitt and Richard O. Christensen, Scripture Study for Latter-day Saint Families: The Doctrine and Covenants, [Salt Lake City: Deseret Book, 2004], p. 54).

Activity: Play the following action memory game with your family. Have everyone stand up. Explain that you will do several actions such as clapping, shaking your head, touching your elbow, and so on. The children must watch carefully. They are to repeat your actions in the same order. Begin with only one action, and add an action each time. Challenge them to see how many actions they can follow. Encourage them to help each other too. Praise them for watching, remembering, and following so carefully. Liken this to remembering Jesus and following his example (Beth Lefgren and Jennifer Jackson, Sharing Time, Family Time, Anytime: Book Two, [Salt Lake City: Bookcraft, 1994], p.84).