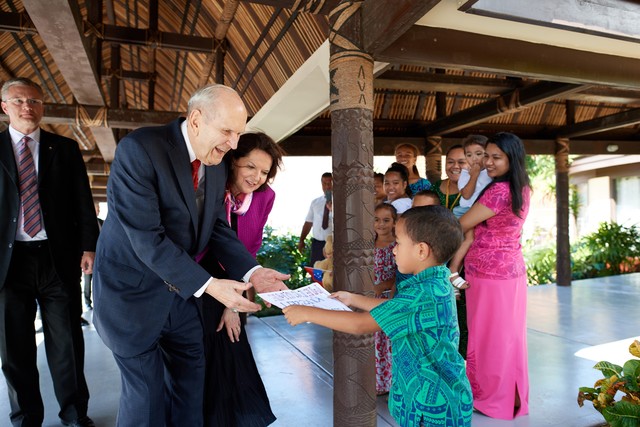 Under threatening skies and with the Apia Samoa Temple in the background, President Russell M. Nelson of The Church of Jesus Christ of Latter-day Saints warned Samoans Saturday night to keep themselves and their children safe.

“There are difficult days ahead,” the 94-year-old prophet said at an outdoor devotional in the South Pacific island nation’s capital city. “Please protect your children. Help them to know the Lord and love Him and keep His commandments and be free from the shackles of addiction and bondage.”

The independent state of Samoa was the second stop on President Nelson’s nine-day Pacific ministry to seven countries.

President Nelson is traveling in the Pacific with his wife, Wendy, and Elder Gerrit W. Gong of the Quorum of the Twelve Apostles and his wife, Susan. On Friday evening, the group was in Kona, Hawaii, where they were greeted by hundreds of Latter-day Saints at an evening meeting.

Samoan Head of State Tuimaleali'ifano Va'aletoa Sualauvi II attended the devotional after welcoming President Nelson at his official residence in the afternoon. It was there that he accepted an invitation to speak at the evening meeting.

“[President Nelson’s] message was quite clear that you’ve got to be strong to be a good person, to be a Christian person and follow the teachings of Christ,” said Lopao‘o Natanielu (Dan) Mua, Samoa’s minister of agriculture and fisheries. “He’s not promising a walk in the park for days to come. It’s definitely not going to be easy, but with faith we can actually achieve our walk in the park — probably not here, but in heaven.”

“[If we follow his counsel], I think we will have a peaceful Samoa,” Hunt said. “What the Church of Jesus Christ [of Latter-day Saints] is doing in our country is amazing.”

“I’m a Catholic, but I know he’s God’s prophet, that he brings peace to us,” Hunt said. “Whatever we do, [Catholics and Latter-day Saints] believe in Jesus Christ, in God, in the Holy Spirit. Hearing [President Nelson has] really filled my heart. I probably am going to use it in my own family, to teach my kids to be brave for what’s going to happen in the future. It’s good that he gave us that warning to help our kids because [our kids are] our future.”

“I was very interested to attend when I heard the prophet is coming to Samoa,” Aiafi said. “It was good to hear [President Nelson] speak on faith and the challenges we are facing now. As Christians, we are to accept that suffering … will face us at this time. We have to be strong in the faith to know we are to live by faith and depend on God. This will make us stronger people and make us better citizens of the world and also for eternity. It helped me as a leader to listen to such wisdom. I learned a lot.”

“It’s like he’s speaking directly to us in what is exactly happening at the moment in families, in communities and in the government as well,” Atiifale said. “It’s a reminder of our responsibility, so we go back and evaluate ourselves, where we are, and where to improve from here, to be good members and good citizens to others, to our fellow men, to do servicing.”

The evening devotional was broadcast to all Samoa and American Samoa congregations. American Samoa is an unincorporated territory of the United States.

As they arrived in Samoa and their vehicle made its way from the airport to Apia, President and Sister Nelson were greeted by hundreds of people lining the streets, waving Samoan flags and holding signs.

Prior to the devotional, President Nelson sat down for an interview with Mata‘afa Keni Lesa, editor of the Samoa Observer. Lesa asked the prophet what his message is to Latter-day Saints in the Pacific. The message, President Nelson said, is the same for everyone, everywhere.

“The main message everywhere we go is to come unto Christ, to receive His blessings in your life,” President Nelson said. “Everyone has a choice — either to choose to follow the Lord Jesus Christ or to choose another path. And as His disciple, I invite people to come unto Christ because it will make life better for you.”

The Pacific ministry runs May 16–25. The senior Church leaders left Salt Lake City on Thursday for Kona, Hawaii. Other stops will include Sydney, Australia; Wellington and Auckland, New Zealand; Suva, Fiji; Nuku’alofa, Tonga; and Papeete, Tahiti, where the prophet will attend a 175th anniversary cultural program celebrating the arrival of the first missionaries to French Polynesia.

The Church, headquartered in Salt Lake City, Utah, has more than 16.3 million members worldwide and more than 200 temples either in operation, announced, under construction or being renovated around the world.

There are nearly 83,000 Latter-day Saints in Samoa. The more than 16,000 members in American Samoa comprise about 29% of that territory’s population. In addition to the temple in Apia, the Church has announced another in Pago Pago, American Samoa.

President Nelson was sustained as the 17th president of the Church in January 2018. Since that time, he has traveled to Europe, Africa, Asia, North America and South America to minister to Latter-day Saints and meet with government and religious leaders, as well as the media.

Lead image from the Church's newsroom of President Nelson with the Samoan head of state, His Highness the Honorable Head of State Tuimaleali‘ifano Va‘aleto‘a Sualauvi II, on May 18, 2019.