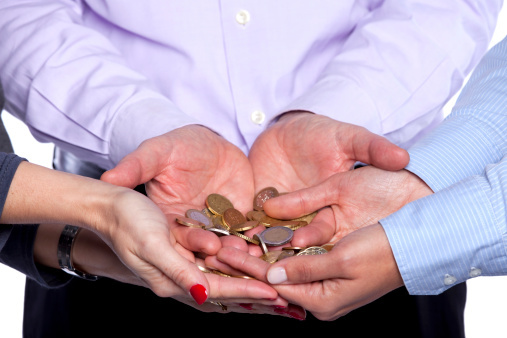 “The value of charity is not limited to those who receive the services that giving makes possible. On the contrary, charity unleashes substantial benefits to the givers themselves” (“Does Giving Make Us Prosperous?”).

In 2008, Arthur C. Brooks examined data from the 2000 Social Capital Community Benchmark Survey to determine the relationship between charitable giving and income. Brooks found that as income level rose, so did the percentage of people who gave charitable contributions. In the highest income category, 94% of people gave charitable contributions and 74% donated to religious causes specifically. Many argued that these findings fit the common economic explanation that with a higher income comes a greater ability to give, but Brooks’ study found this explanation too simplistic. Instead, he found, “charity and prosperity are mutually reinforcing,” meaning when we give more, we become more prosperous, and when we become more prosperous, we tend to give more (“Does Giving Make Us Prosperous?”).

We’ve heard it time and time again: Heavenly Father has promised us that when we pay our tithing, He will “open you the windows of heaven, and pour you out a blessing, that there shall not be room enough to receive it” (Malachi 3:10). But, oftentimes, we consider these blessings as purely economic. We give of our income, so that means we should receive money back, right?

Not really, no. Prosperity is so much more than your annual income. The miracle of tithing is that it teaches us those Christlike attributes that help us become more prosperous Saints, not necessarily just richer Saints. Tithing teaches us to budget, to work hard, and to invest in things we care about. It shows us our priorities and what we should be spending our money on. As a result, we become the type of people with the work ethic, perspective, and economic sense to be prosperous regardless of our income.  If we are just investing in tithing hoping we’ll get material wealth in return, we are missing out on the most important and eternally significant ways that tithing shapes and blesses us.

In 2008, researchers from Harvard and the University of British Columbia asked a sample of 632 Americans to estimate their general level of happiness as well as how much money they spend monthly on bills, on themselves, on others, and on donations to charities. The results of the study demonstrated that those who spend more (comparatively) on others have a greater level of overall happiness, while spending on personal expenses did not influence happiness (“Spending Money on Others Promotes Happiness”).

In a later study, these same researchers tried to determine whether this increased happiness was a reason or a result of charitable giving. Participants were given either $5 or $20, and half were asked to spend the money on themselves, while the other half were asked to spend the money on donations or gifts for others. The participants’ were asked about their general level of happiness at the beginning and the end of the day, and those who were asked to spend money on others were happier at the end of the day. “Interestingly, the amount of money people were given did not influence how happy they were that evening, suggesting that how people spent their money was more important than how much money they received” (“Feeling Good about Giving”)

Despite the obvious benefits of charitable spending, these researchers were surprised to note that people devote over ten times as much money on themselves as on others. And, the majority of people think that this kind of personal spending will increase their happiness more than charitable spending (“Spending Money on Others Promotes Happiness”).

As Latter-day Saints, we are blessed to live in a Church that understands the underlying basis for happiness—those attributes and values that bring us closer to our Savior. When we give and focus on matters of spiritual wealth, not just material wealth, we are happier—simple as that. Tithing coupled with fast offerings allows us to receive this increased level of happiness—regardless of our circumstances and regardless of how much money goes into our tithing envelopes.

Not only that, but the regularity of tithing provides a continual and consistent source of happiness. As these researchers observed, the one-time giving behavior in these studies contributes to a fleeting happiness and self-satisfaction. But, becoming involved in activities (or a church) that require effort and active engagement to give and keep giving “may represent a more promising route to lasting happiness” (“Spending Money on Others Promotes Happiness”).

“This importance of social ties brings us to the particular brilliance of tithing. Done as most people envision it — that is, giving generously to your local church — tithing helps build the ultimate social network: a thriving community of people who will care for you, pray for you and help you in tough times” (USA Today, “Does Tithing Buy Happiness?”).

Sacrificing for others and spending money on things that bind communities together brings greater happiness and satisfaction. It’s more worthwhile because it is an investment that is larger and potentially more far-reaching than just investing in ourselves.

Tithing allows us to invest in the wonderful work of the Church—an organization that we know about and have pride being a part of. Fast offerings in particular allow us to give to those immediately around us in our wards, building unity and stronger community. Because both of these types of charitable giving are associated with groups with which we have strong social ties, they are more meaningful and build more happiness than giving a one-time donation to a person, group, or charity we are not associated with.

“During the Great Depression . . . some of our bishops observed that members who paid their tithing were able to support their families more effectively than those who did not. The tithe payers tended to keep their employment, enjoy good health, and be free from the most devastating effects of economic and spiritual depression” (“Tithing,” Dallin Oaks).

In 2010, researchers had participants in a study engage in an economic game—a game during which they had the opportunity to donate some of their money to other participants. Before and after the game, the participants’ cortisol levels were tested to understand how these behaviors influenced the participants’ health. (Cortisol is the hormone that is released and that helps regulate the body when it is under stress.) Participants who were stingier with their money and donated less to others had an increased level of cortisol after the game, more so than generous participants (“On the Costs of Self-Interested Economic Behavior”). This study demonstrates that those who give more readily experience less stress in regards to money—and that decreased stress level leads to better health as well as happiness in the long run.

When we pay our tithing with the right mindset, we understand that the source of all our wealth, our blessings, our talents, and our opportunities is our Heavenly Father. As a result, we will not experience as much stress and frustration in regards to economic struggles or material acquisition because we trust in our Heavenly Father and look for determiners of success that go beyond this world and its challenges. With that long-term perspective, fluctuations in the stock market or unexpected repairs or bills will not have the power to stress us out as readily. Instead, we will be able to “Consider the lilies how they grow: they toil not, they spin not” and know that “If then God so clothe the grass, which is to day in the field, and to morrow is cast into the oven; how much more will he clothe you” (Luke 12:27-28).

Tithing Helps Us Emotionally, at Any Age

“Before the age of two, toddlers exhibit greater happiness when giving treats to others than receiving treats themselves. Further, children are happier after engaging in costly giving – forfeiting their own resources – than when giving the same treat at no cost” (“Giving Leads to Happiness in Young Children”).

A study in 2012 found that children feel and exhibit the joy of sharing and sacrificing for others, even at a very young age. For the study, toddlers were introduced to a puppet and then given certain treats—some that were their own, and others that the researcher “found.” The toddlers were then encouraged to share one of these found treats with the puppet and later asked to share one of their own treats. Closely observing these toddlers and their levels of happiness, the researchers discovered that the children found the act of giving very emotionally rewarding—and even more so when they were able to give something of their own (“Giving Leads to Happiness in Young Children”).

While tithing boosts us spiritually, socially, and economically, it also strengthens us emotionally. We receive a sense of fulfillment and satisfaction that keeps us focused on the good we can do and not fixated on the problems that might surround us.

And this feeling of happiness is not limited by age. As with all of us, children are blessed with the light of Christ. They can understand and feel the difference righteous living makes, even if they cannot yet describe what those emotions mean. Because of this innate potential, children should be encouraged from a young age to participate in tithing. You are never too young to contribute to the Lord’s work or to feel the rewarding blessings that come from paying a full tithe.