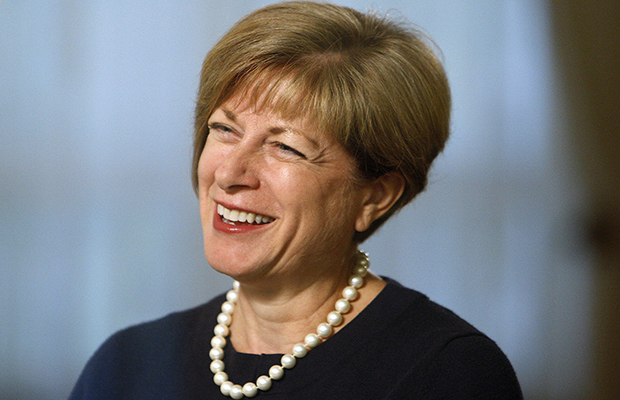 Sister Beck Shares How to Develop the Faith of Miracles, Become "Awash in Christ's Grace"

At the opening of the 2019 BYU Women's Conference, Sister Reyna I. Aburto, second counselor in the general Relief Society presidency, stood to quote Ether 12:16, “and even all they who wrought miracles wrought them by faith.”

"I know that it was by faith that Eve initiated the conditions of mortality with wisdom and courage," Sister Aburto testified. "It was by faith that Mary accepted the sacred calling to be the mother of Jesus, and knowing that with God nothing is impossible, she rejoiced in God, accepted her assignment with humility, and raised that child, with the understanding that His mission was greater than her fears."

Sister Aburto continued to delineate other women of faith, strength, and courage who wrought miracles in the scriptures as well as those who continue to take part in miracles today.

"It is by faith in Jesus Christ that a woman whose life is not what she had hoped for, and even though her ground sometimes shakes, she continues to cling to the iron rod, despite the mist of darkness around her, because she knows that in due time, she will receive of God’s fullness," Sister Aburto testified.

As the opening keynote speaker for the 2019 BYU Women's Conference, Sister Julie B. Beck, former general Relief Society president, spoke more about the fullness we receive in the gospel through Jesus Christ.

Sister Beck opened with a scripture from Ether 12:41: “And now I would commend you to seek this Jesus of whom the prophets and apostles have written, that the grace of God the Father and also the Lord Jesus Christ, and the Holy Ghost which beareth record of them, may be and abide in you forever."

Sister Beck reflected on the word "this," noting how it gives this scripture an emphasis and specificity about whom it is we seek. But if the scriptures testify and rejoice in our Savior, Jesus Christ, why would this passage need to specify "this" Jesus?

Sister Beck says, "Since the dawn of Christian belief, the search for Him [Jesus Christ] and who He is has involved passion and devotion, hate and violence. Many people abhor the mention of Him, and many believe deeply and sincerely that they have been changed by Him. People have claimed to fight wars in His name, kingdoms have been established and divided over interpretations of Him, and devotees have formed thousands of churches and organizations seeking to glorify His name. Great good and great evil have been done invoking His name."

Because of this worldly confusion about who Jesus Christ was and is, the passage in Ether instructs us to seek after the Jesus we learn of in the scriptures and come to know Him ourselves.

While the world can often view Jesus Christ as merely a man or even as an unknowable mythical figure or "magic genie," Sister Beck clarifies, "He is not symbolic or superficial. He is not an unknown God. But in the ordinances of The Church of Jesus Christ of Latter-day Saints, we do employ symbols to help us remember Him and those symbols represent a real Being."

About how we can distinguish the true Jesus from the noise of the world, Sister Beck says:

"Apostles and prophets have written that this Jesus has always had a specific doctrine which is associated with His covenant. They teach His theology of His Father’s eternal covenant family. It was for that family that the earth was created. It was to prepare us for that family that we were born and that we experience mortality. It was for perpetuation of that covenant relationship that Jesus Christ suffered and atoned for all of our weakness and sins."

The fullness of the gospel of Jesus Christ comes from being gathered, linked with, and connected to our Savior and eternal family through covenants, Sister Beck explained. And it is through these divine connections that we receive blessings beyond imagining.

"By becoming part of His eternal covenant family, the house of Israel, we become heirs to all the blessings our Father has promised us," Sister Beck says. "This is why President Nelson has made a specific plea for us to 'gather Israel on both sides of the veil.' He declared: 'There is nothing happening on this earth right now that is more important than that. There is nothing of greater consequence. Absolutely nothing. This gathering should mean everything to you. This is the mission for which you were sent to earth.'"

Through Pain We Can Be Stretched and Receive Grace

But following a church checklist or learning casually from the scriptures is not enough for us to receive of this fullness of blessings and glory. To receive all that the Father has, we need to reach, to stretch, and to seek this Jesus for ourselves.

Sister Beck related the story of the woman who suffered from an issue of blood who was healed by touching the hem of Jesus Christ's robe. She explains:

"In a crowded space where a multitude was thronging Him, the Savior detected the faith of this woman that allowed His atoning grace to work a miracle. From this account we learn that even in a crowd, suffering and healing are personal and also that it is possible for us to be in the 'throng' of followers, such as in meetings and classrooms and the activities of the Church, and not 'touch' Jesus Christ with our faith in Him. It is possible to check all the boxes of advancement, participate in programs, serve in callings, even go on missions and through the rituals of making covenants, and still not possess sufficient faith to represent Him in our actions."

But how do we develop such faith to work miracles? One way Sister Beck detailed was through enduring trials. "In most cases, it is the pain and stretching we experience which give us the greater knowledge of Him. That knowledge is hard-earned but it comes with its own reward of recognizing Him and His presence in our lives," Sister Beck says. "In reality, our life is meant to be a personal, faith-based work."

While pain and suffering can work as a catalyst to bring us nearer our Savior, they are not required for us to develop deeper faith. If we desire to draw nearer to heaven and are willing to put in the effort, our Savior will draw near to us, working miracles in our lives. "Through faith, we can change, becoming better people, becoming more than the sum of our own limited selves," Sister Beck says. She detailed a recent need for which her family had been praying. While the Becks continued to pray, read scriptures, go to the temple, and do all that they were taught to do, Sister Beck says it became obvious that this need would "require greater faith and a few miracles." As she and her family put aside their doubts and followed promptings, no matter how illogical, Sister Beck says, "We were awash in His grace!"

She concludes, "I have . . . learned for myself that this Jesus is a God of might and mercy. He is real, and His work is real, and His covenants and ordinances have been restored with His priesthood power. At His invitation we are to 'feel after Him' in a personal, daily, faith-based effort to 'seek this Jesus of whom the prophets and apostles have written, that the grace of God the Father and also the Lord Jesus Christ, and the Holy Ghost which beareth record of them, may be and abide in you forever.'"