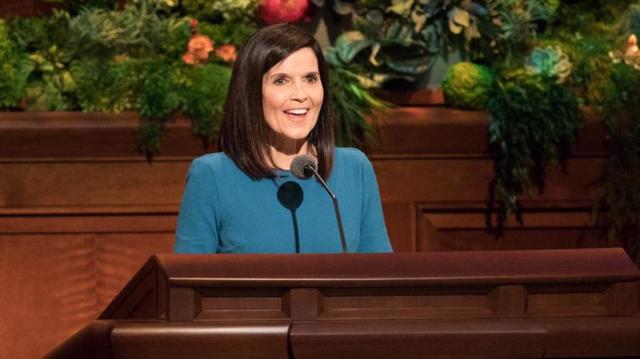 Church leaders have often spoken about the care and prayer that goes into preparing their talks for general conference.

"Perhaps you already know (but if you don't you should) that with rare exception, no man or woman who speaks here is assigned a topic. Each is to fast and pray, study and seek, start and stop and start again until he or she is confident that for this conference, at this time, his or hers is the topic the Lord wishes that speaker to present regardless of personal wishes or private preferences. Every man and woman you have heard during the past 10 hours of general conference has tried to be true to that prompting. Each has wept, worried, and earnestly sought the Lord’s direction to guide his or her thoughts and expression."

But what happens once the speaker reaches the pulpit? Sister Bonnie L. Oscarson, former Young Women general president, once described the anxiety and nerves of speaking to millions of Latter-day Saints around the world. "The clock does hit that point and the little sign does go on that says stand up and so you walk to the pulpit and something kind of miraculous happens when you step up to that pulpit," she said. "There is something that surrounds you when you stand up there and you feel calm, and you feel peace, and you know you're not alone."

Sister Becky Craven, second counselor in the Young Women general presidency, recently spoke of this same peace on Facebook and described the source of that comfort:

"Never in my WILDEST dreams did I imagine I’d stand at this walnut podium and deliver a talk in general conference!

"What happened when this unexpected opportunity came? Well, I nervously approached the podium and immediately felt a wave of peace. It was as if I had walked through the doors of the temple. Throughout my talk I floated on the wings of every prayer that had been offered.

"For years my family has prayed for the general conference speakers—and NOW I know from personal experience those prayers matter.

"So, TODAY would you take time to pray for the speakers in general conference this weekend? It’s just one simple way you can minister to your sometimes very nervous brothers and sisters."