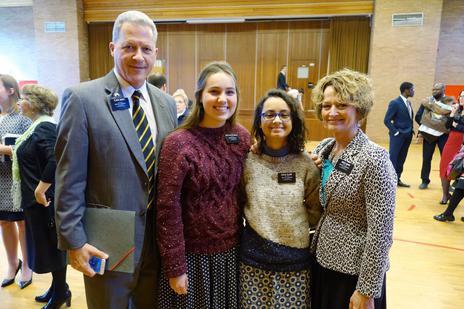 Despite a blood infection that slowed her recovery, Sister Fanny Clain was released from the hospital and still plans to serve her mission later this summer.

Sister Fanny Clain, the 20-year-old French woman who was one of four Mormon missionaries wounded in the March 22 Brussels airport terrorist bombing, has been released from a Belgian hospital.

There also was news Tuesday about the two missionaries who remain hospitalized because of the injuries they suffered in the attack.

Mason Wells, 19, one of the other three injured missionaries, underwent skin graft surgery on Monday and is recovering well at University Hospital in Salt Lake City, his parents said in statement.

Lead image from Deseret News of Elder Richard Norby, Sister Haylie VanDenBerghe, Sister Fanny Clain and Sister Pam Norby posing for a photograph together after a recent meeting prior to the March 22, 2016, Brussels airport terrorist attack.