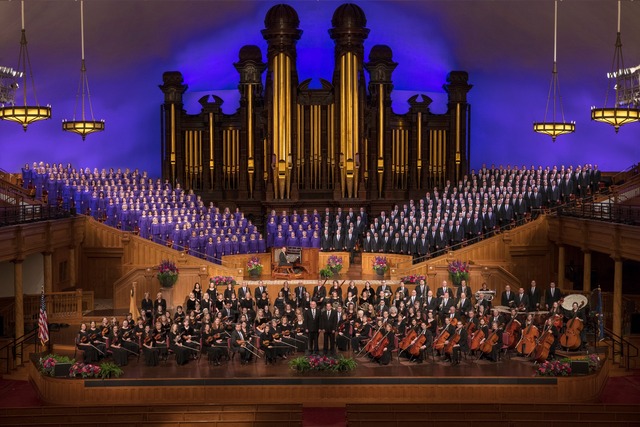 The Tabernacle Choir at Temple Square has a new logo.

During a digital press conference, Tabernacle Choir president Ron Jarrett and choir director Mack Wilberg explained the design of the new logo as well as its symbolic significance.

The Choir changed its name on October 5, 2018, after President Russell M. Nelson talked about the importance of using the full and proper name of the Church in August of that year.

After the Choir’s name change, the organization worked with two partners—Boncom and the research department from The Church of Jesus Christ of Latter-day Saints—who helped them strategize how to support the Church, extend its reach, and become more relevant to listeners.

Research lasted for a little over a year, and this new logo is a result of those efforts. Staying true to logos past, the Choir’s new logo incorporates the tabernacle organ pipes, but with a fresh take. Simplified and gold in color, the organ pipes are seven in number—tied to the scriptural concept of being “whole” or “complete,” says Wilberg.

Drawn across the pipes is a curved line, which represents the domed shape of the iconic Tabernacle building on Temple Square in Salt Lake City. Jarrett notes that the Choir’s history goes back 150 years, and the new logo honors that history.

“The organ pipes thrust upward so that you can focus all of our music toward bringing people to look to the divine for musical strength and support,” he says. “The design helps us to point ourselves and expand our media opportunities to being more digital, but yet still hanging on to our past.”

Wilberg also pointed out the musical significance in the new logo.

“We feel that the rising and falling motion of the pipes in the new logo alludes to the rhythm of music and that they also rest upon what we call a very clear and a firm foundation,” he says. “We’re always respectful of that wonderful foundation that was created by the countless musicians and volunteers over the choir’s century-long history. And we wanted to honor that as well.” 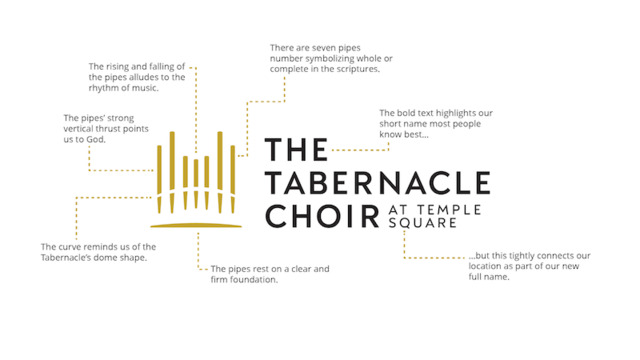 The new logo will be used on the choir’s website and social platforms. It will also be animated on programs such as “Music and the Spoken Word” in addition to other videos. This step points towards the Choir’s future and its focus on reaching new audiences, says Jarrett. Currently, “Music and the Spoken Word” is broadcast in English, Portuguese, Spanish, and French. They are looking for ways to expand its reach even further in the future, including tours and special concerts.

Members of the Choir have not been able to rehearse or perform live during the COVID-19 pandemic, but Wilberg says he hopes the recorded music, particularly the “Music and the Spoken Word” broadcast, is uplifting people during this time of uncertainty.

“One of the goals of the choir and the orchestra are to bring comfort and hope to our many listeners, and I think that we’ve tried to select carefully broadcasts of the past that have alluded to these important aspects of what people are feeling right now,” Wilberg says. “And we’re hoping that by what we’ve done in the past it can have an influence on those who are needing comfort and inspiration during these challenging times.”

Wilberg also spoke of the bittersweet emotions he felt while watching April 2020 general conference from home as the music was prerecorded due to the virus.

“It was quite unique,” he said. “I have to admit that I personally missed being there, but at the same time it was also great to not only experience those things that we had recorded several weeks before but . . . to also see the many wonderful musicians from even 20 years ago, who were also a part of conference. And I was actually quite touched by watching that because, quite honestly, some of the folks that we saw have passed away and others I haven’t seen for many, many years. And so, let’s just say it was with mixed emotions. It was very unique and in its own way, was really quite wonderful.”

► You may also like: What the Worldwide General Conference Choir Taught Me About Unity During Isolation

The new logo precedes the release of The Tabernacle Choir’s new album, which is available for purchase in May. Recently, the Tabernacle Choir celebrated having over 50 of its albums available on Spotify. Jarrett adds that he is looking forward to when the Choir is able to come together and rehearse again.

“Coming back will be an opportunity to bring all those voices together. Hopefully, we’ll be in a place where we can rehearse together as a choir,” he says. “I can hardly wait for that opportunity to be back with those good people.”

According to Jarrett, auditions for the Choir will begin in July as scheduled, and a new class of choir members will start in January. Church spokesman Daniel Woodruff stated that they are also analyzing the situation of the pandemic worldwide, and an announcement of the Choir’s summer 2020 tour will be forthcoming. In the meantime, Wilberg says they are doing all that they can digitally to reach listeners and to bring them hope.

“We feel that these new digital efforts build upon the strengths of the Choir and its music in bringing inspiration and hope, joy, and comfort to our many listeners,” he says. “And as we know, music has the power to touch people in ways that other things cannot. And so we’re hoping that by entering this digital space, we’ll be able to do so in even greater ways.”