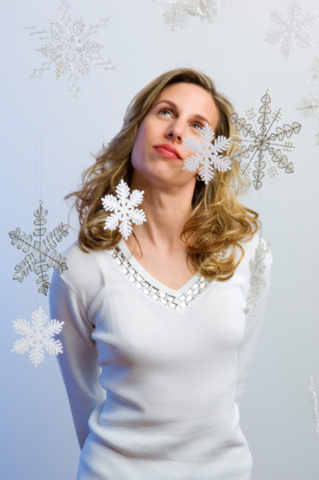 A beautiful blanket of white covered the graying world, gathering light from the full moon and reflecting it up to make the night bright. It was perfectly silent outside, the snow absorbing all the noise and leaving only a feeling of breathtaking awe.

The second time it snowed, right around Thanksgiving, I was less enchanted. My husband had wrenched his back from shoveling away the magic the first time it snowed, so it was mostly up to me to get the driveway cleaned off. (Why, oh why did we put in that big double driveway when the kids were on the verge of moving out anyway?) Or, if not get it completely cleaned off, I at least needed to do enough to keep us from getting ticketed for not clearing the sidewalks within 24 hours of the storm’s ending. (Would anyone really be mean enough to ticket you for that? The ultimate addition of insult to injury.)

The third time it snowed, just after Thanksgiving, I had to clamp my lips shut to keep any naughty words from escaping them. My husband did the minimum mandatory sidewalk shoveling and we left the driveway au naturel. Granted, it was a bit of an adventure trying to muscle in past the wall of snow left by the plow, but we managed. I went out once that week to try to carve out a path from the house to the sidewalk anyway, but it was so bitterly cold, and the snow that had now been run over many times by multiple vehicles seemed so permanently adhered to the concrete, that I gave it up.

That weekend, though, it warmed up outside—and by “up,” I mean clear into the thirties— and we thought maybe we’d give it another shot. To our astonishment, the ice that had previously been so stubborn slipped up in big sheets under our shovels. It was practically a pleasure to scoop it away and even more of a pleasure to walk across a perfectly clear driveway the next day for church.

I’m not advocating the procrastination of snow removal. It’s lots easier to shovel a driveway before anyone has actually driven on it, and then you can enjoy many more easy, guilt-free days. But I was interested to find that a task that seemed so hopeless one day turned out, with a little help from the sun, to be not as big a deal as I’d feared.

It made me wonder if sometimes we hammer away sort of fruitlessly at seemingly insurmountable obstacles that might be better left to sit until they’ve softened up a bit. With a little perspective, added to a little help from the Son, maybe after a little time has passed they won’t seem so bad.

Or maybe a new neighbor will move in who owns a snowblower.