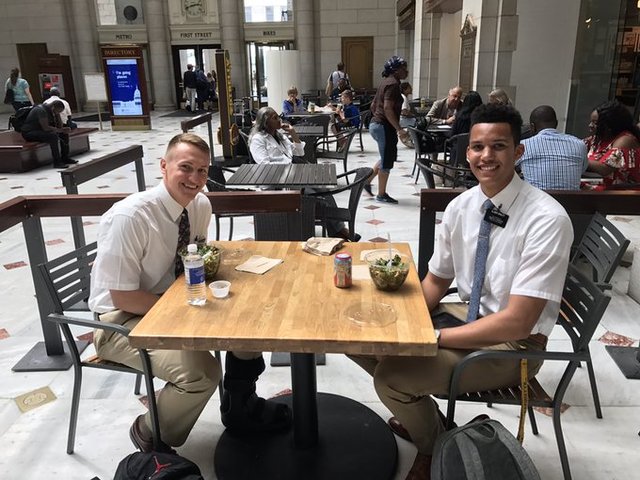 Caught on Camera: Missionary, Son of NBA Star, Performs Selfless Act for a Man in Need

Thanks to Deseret News for making us aware of this story.

On Monday, the communications director for Utah Senator Orrin Hatch, Matt Whitlock, caught the act of service on camera while at the Union Station in Washington D.C.

The video shows Elder Bailey eating lunch with his companion and giving money to a man who approached him in the Union Station, an act of service that isn't always easy with the limited budget of missionaries.

Though he didn't know at the time that one of the missionaries was Thurl Bailey's son, Whitlock was impressed with the selfless act of service and posted the video on his Twitter account.

"Missionaries live on a tight budget. Impressive to see them helping a guy out in Union Station," Whitlock posted with the video.

Missionaries live on a tight budget. Impressive to see them helping a guy out in Union Station. pic.twitter.com/XTsDV7tptP

He also later posted a picture of the two missionaries, this time noting Elder Bailey.

Fun fact: later found out that missionary was Elder Bailey, son of Thurl Bailey. Who you all know... https://t.co/u2kl9wFY3Cpic.twitter.com/qwjKlH2SDG— Matt Whitlock (@mattdizwhitlock) June 26, 2017

It's so good to see the service missionaries do and share it with others as well.