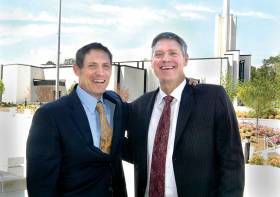 Steve Young and Dale Murphy played different sports in different cities during their professional careers, but there’s a strong link between them.

Yes, they were both superstars defined by their tenures with one team for most of their careers, Young as a uniquely skilled, Hall-of-Fame quarterback with the San Francisco 49ers, Murphy as a powerful outfielder for the Atlanta Braves.

Something beyond athletic stardom connects these two friends, though. It has brought about mutual admiration for qualities beyond Young’s ability to elude a rush and throw a touchdown pass to Jerry Rice or Murphy’s home-run hitting clout.

They are both devout Mormons, and they were together again last week when they came to greet those touring the Church of Jesus Christ of Latter-day Saints’ Atlanta Temple in Sandy Springs, officially re-opened after two years of extensive refurbishments, and also see it themselves. The temple, whose original construction was completed in 1983, will be open through April 23 for visitors.
Read the rest of this story at neighbornewspapers.com