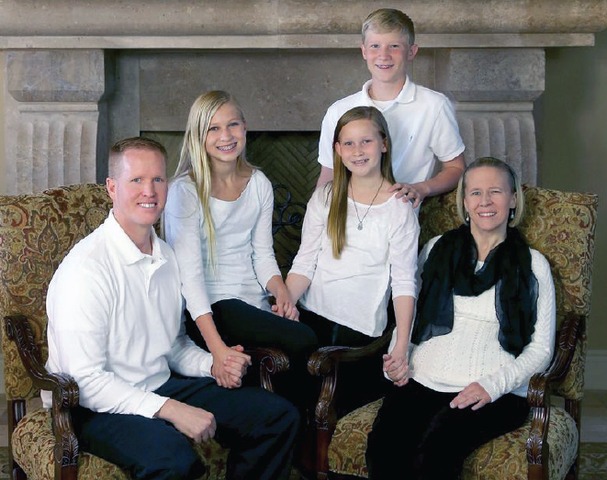 Against the Odds: One Couple’s Amazing Love Story

When mother of three Jenny Lynn suffered a massive brain stem stroke, doctors encouraged her husband, Mark, to remove her from life support. But for the Lynns, eternal marriage means more than temporal comfort—it means hope, love, and sacrifice.

“Go . . . to . . . the . . . temple.” Those were the first words Jenny Lynn communicated to her husband, Mark, on March 19, 2004. Words that took an agonizing 12 minutes to convey. Thirteen letters that formed the most powerful and miraculous words for Mark and their children.

Mark and Jenny first met on a blind date nine years earlier in December of 1993 at Brigham Young University. Mark grew up in Idaho and was majoring in psychology. Jenny, a native of Illinois, was studying elementary education and music.

“I liked him right away,” Jenny recalls. “I thought he was too attractive for a blind date. Funny thing is I always had a ‘thing’ for redheads but had never dated one until him!”

“I took her to the First Presidency Christmas Devotional in the Salt Lake Tabernacle,” Mark says. “She was so easy to talk to. I made sure I asked her out on a second date when I walked her to her door at the end of the first. I didn’t want this one to get away.”

Jenny loved the theater; Mark preferred the mountains. Jenny lived for Broadway; Mark enjoyed hiking. Despite their differences, they learned no matter what the activity, if they were together, they were happy. One year later, they were sealed in the Chicago Illinois Temple, which was a natural choice for the couple, Mark says, and “a beautiful start to a great relationship.” 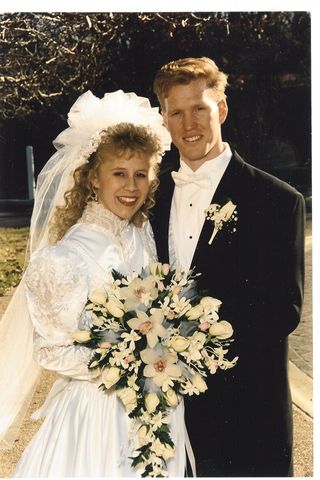 However, nine years and three children later, that relationship, and their faith, would be severely tested. On March 16, 2004—while making lunch for their children in their Austin, Texas home—Jenny collapsed on the kitchen floor. Jenny, then 30 years old, had suffered a massive brain stem stroke. Doctors said it was the worst they had seen where the patient survived. All of Jenny’s voluntary muscles were paralyzed. A breathing machine was keeping her alive. 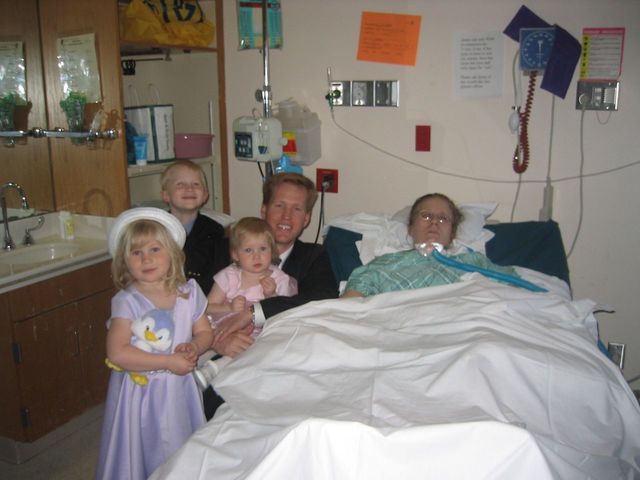 Doctors encouraged Mark to remove Jenny from life support, telling him she could never have any quality of life worth living. Twice their children were brought to their mother’s bedside to say their final goodbyes.

One day, Mark remembers kneeling next to his wife at the Cleveland Clinic where Jenny had been transported. He told her the doctors’ recommendation would allow her to pass on and be free from the expected misery that accompanies this type of brain injury.

Mark assured her he would not terminate her life but felt Jenny needed to be given the option so she could decide for herself. Jenny heard and understood what he was saying but thought it was all a bad dream. Both desperate for some form of communication, they found a way she could blink a response: Mark would point to the letters in the alphabet and Jenny would blink when it was correct. Mark said the first few tries were difficult since her eyes would dry up and she would blink prematurely.

“I was initially surprised that she would see past the immediate physical needs and feel that telling me to go to the temple was the most important thing. Somewhat selfishly, I wanted her to tell me how much she loved me and the kids because I was not sure if I would ever hear that again. I believe she chose the best way to communicate all of those things in telling me to go to the temple.”

Mark took Jenny’s advice and went to the nearest temple in Columbus, Ohio. He was nervous to leave her side because her condition was still “touch and go.” But what happened that night in the celestial room not only comforted Mark’s heart, it also healed his faith.

“I kept getting frustrated, asking the same question in my prayers: ‘Why us? Why is this happening to us?’ And I realized it was the wrong question to ask. I think the question is, ‘Help me to see what we’re supposed to see.’ In response to that prayer, I was given a vision of what our future would be like. It was at that moment that I experienced one of the greatest tender mercies that the Lord could offer. I saw our family at various stages of life. In each instance, we were happy. I wished Jenny could have experienced what I saw, but perhaps it was what I needed to be able to accomplish my role in this new plan. And that was the greatest thing that ever happened to me.”

That great experience would help Mark and Jenny get through the difficult times ahead. Jenny was in the hospital for three months and went through grueling physical, occupational, and speech therapy. Nearly five months after the stroke, her tracheotomy was reversed and she could breathe on her own. Over time, she was also able to regain limited use of her right hand. She now communicates through sign language with that hand, which her family interprets.

Going from an independent wife, mother, singer, and dancer to almost completely dependent on everyone was one of Jenny’s greatest trials. 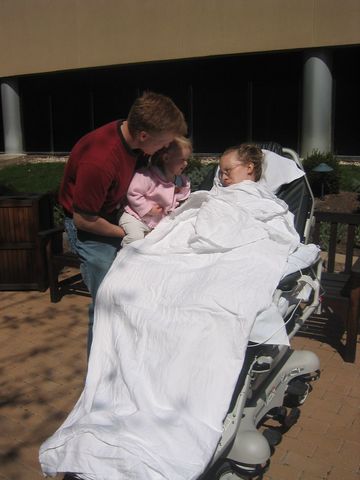 “I didn’t realize the ‘not moving’ part,” Jenny recalls. “In fact, it was several months before I knew I had a stroke, and by then, even though I’d figured out that I couldn’t move, I had no reason to think I couldn’t relearn movement.”

Jenny is slowly relearning many things, like putting scrapbooks together on their oversized computer, one that helps her see more clearly since she struggles with double vision. She writes her own blog posts and emails, typing slowly with her one good hand, and she’s the compassionate service leader in her Relief Society. She’s even back at the piano, hoping to once again play the songs she loves. Her favorite is “I Love to See the Temple.”

“I have found that I can do things differently and still feel joy,” she adds. “I just seemed to know I’d get better, and it was as though God told me to say, ‘Yes, I’ll live.’”

Jenny knows God is with her, though she admits she questioned that early on, even feeling abandoned at times. Not anymore. “I better understand Christ’s Atonement. It’s not just about forgiveness. He really gets how I feel, and He knows what I’m thinking and the desires of my heart. I need Christ! He strengthens me physically and spiritually.”

Jenny and her family continue to live their lives as normally as possible. They love spending time together, playing games, and going to the beach for summer vacations. One of Jenny’s favorite activities is when Mark carries her into the shallow water so she can feel the waves. She even likes roller coasters, and “the scarier the ride the better,” Mark says.

Their children, Zach, Jessica, and Sophia, have been Jenny’s constant companions. They learned early on to do laundry, yard work, and make family meals.

Mark himself is a psychotherapist now in private practice, so he’s able to arrange his schedule to be Jenny’s primary caregiver. He bathes her, feeds her, and helps her with daily physical therapy. It’s something he does with true compassion and love.

“I am always worried and thinking about Jenny,” he says. “Even on rare occasions when we’re apart for a brief time, I am always wondering how she’s doing with someone else taking care of her. We are together a lot. If we did not love each other, I don’t think we could enjoy how much we are together.”

“Mark is truly my best friend,” Jenny shares. “When we were married in 1994, I thought I knew what that meant. I wasn’t wrong, and I was on the right track, but now it is so much more! We still have our disagreements, but there is a confidence, trust, and love that was built when he decided to stay by my side. God put someone in my life that could help me with my journey.”

Jenny’s journey moves along and improves in ways doctors never imagined. And recently, she was able to produce words from a voice that was silent for years. She even told Mark, “I love you”—words he thought he’d never hear again. Though her words are still few and infrequent, her family cherishes every one of them, especially Jenny.

“I remember when they said I’d never talk again, and I thought, ‘yeah, right,’” says Jenny. “I am not using a machine to talk. They were wrong.”

As Jenny looks back at the years of constant pain and struggle, she realizes the lessons learned, especially of compassion and patience. She knows how very blessed she is to have a husband who has never wavered in his love and support and who will be her eternal companion. They celebrated their 20th wedding anniversary in December 2013, and their temple marriage is now more important than ever.

“It would be so sad if I thought that this was all Mark would have for the rest of our marriage! Eternity means I can hang on to many of our hopes and dreams, knowing that this life is temporary and brief in the scheme of things,” Jenny says.

Mark recalls his own epiphany early in their shared trial. “My work supervisor met with me for lunch so I could discuss my plans to take an indefinite leave of absence to care for Jenny. He said that he felt I was a good man but was surprised that I was deciding to stay in the marriage. He had seen so many marriages fall apart when he and his friends returned home from Vietnam, many with significant injuries. My first thought was, ‘Of course I would stay with Jenny. We are married for time and eternity.’ It was at that moment that I realized that I really believed in eternal marriage. It was not that I doubted it before, but when my decisions were questioned, it only made sense to continue with my marriage because this earth life was just a tiny part of what our relationship would involve.”

Through it all, the Lynns know they received a miracle. Though Jenny may never walk again, the fact she’s alive is a miracle. It’s also miraculous that nine years after that first message to her husband, Jenny and Mark frequently go to the San Antonio Temple.

“When things are good,” Mark says, “we can say there’s a lot we believe in. When we got married in the temple, I did it because I knew we’d be sealed for time and all eternity. What we’re doing on a day-to-day basis is kind of the way we’ll be living forever. We care for each other, we love each other, and we enjoy being together as a family. It only makes sense that that’s how Heavenly Father wants it to be.”

“For the most part, things are wonderful,” Jenny says, “but when things are difficult, they’ll be difficult for a relatively short amount of time.” She continues, “I know that God knows us all personally, has a vested interest in our lives, and will intervene where necessary. I know our trials are just a moment in time and that only God can see the big picture, so I need to trust and have faith in Him. I know families are forever.”

This article was originally printed in the Jan/Feb 2014 issue of LDS Living.

Learn more about the Lynns' powerful story by watching the video below.

Makes You Think Temples Marriage Family Lifestyle FamilyTemples,Marriage,Family,Lifestyle,Family,Makes You Think
Comments and feedback can be sent to feedback@ldsliving.com