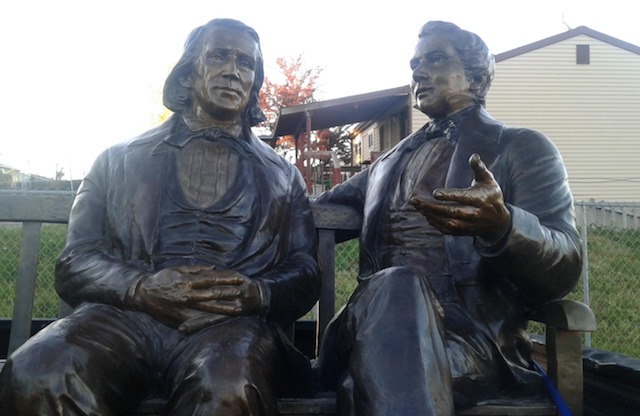 A woman from West Jordan, Utah, called police after she spotted the statue in the back of a truck, according to KUTV. Police also received other tips about the statue's whereabouts.

After a long day of #detective work we're happy to report that the bronze statue has been recovered. — SLC Police Dept. (@slcpd) May 24, 2017

According to KUTV, Michele Wilson believed her neighbors were trying to hide the statue in their garage.

The statue was stolen early Tuesday morning near Northgate Business Park, 825 N. 300 West in Salt Lake City. Survallience footage showed three men and one woman load the statue onto a flatbed trailer at approximately 4 a.m. before taking off.

Though police were worried the thieves would try to cut down the statue, valued at $125,000, to sell for scrap metal, the statue was found unharmed.

According to the Deseret News, police are still uncertain about the thieves' motivation for stealing the statue.

Salt Lake City Mayor Jackie Biskupski shared her appreciation for the work that went into finding the statue.