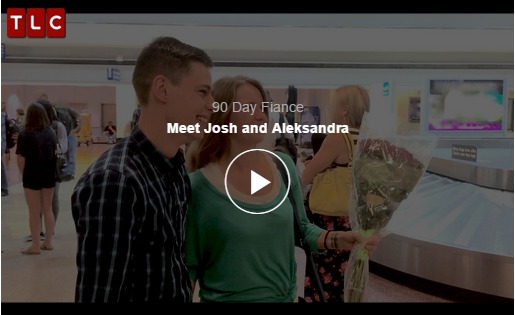 The season opener of TLC's hit show 90 Day Fiancé will feature a Mormon returned missionary and the story of how he fell in love with a self-described Russian party girl.

The Unbelievable True Love Story of an Atheist and a Mormon.org Volunteer

Prior to meeting Josh, Aleksandra enjoyed the nightlife--dancing and drinking with her friends until early in the morning. But, then Josh met Aleksandra while tracting near her neighborhood. Though seemingly opposite and though Josh was unable to date Aleksandra while on his mission, the two stayed in contact. Aleksandra eventually converted to Mormonism, and Josh got back in contact with her when he returned home to Idaho.

Dating over Skype, the two have now decided to marry, despite their differences and some family reservations. With Aleksandra coming to the United States, the two now have 90 days to get married using a special K-1 visa (nicknamed the Fiancé visa). The show will return to TLC this Sunday,  October 18 at 10/9 central time.