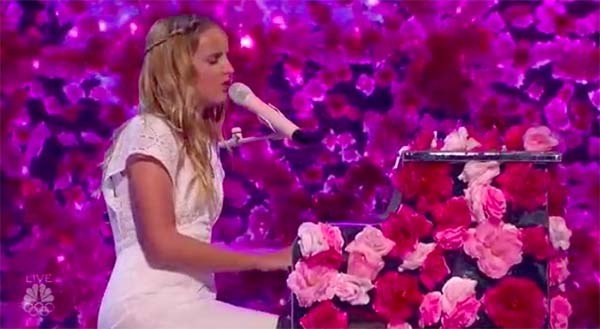 "Last night was both incredible and horrific. The home videos they played before Evelyn’s performance touched me so deeply and carried into my dreams. I was only able to sleep for about an hour last night so I’m surprised I had a dream at all.

"After her performance I found a quiet place back stage to tell her that her dad’s organs were failing and that he had been placed on life support."

Amos Abplanalp, who has been battling stage 4 cancer for over a year, discovered he had cancer in April 2016 while he was serving as a bishop in Florence, Arizona. He continued to serve as bishop through his first surgeries, receiving "blessings from above to do so," a video description on Evie's YouTube channel states.

During her time on America's Got Talent, Evie has dedicated her songs to her father, hoping they will give him the strength to keep fighting. Evie told Parade that if she won the $1 million prize from the competition, she would use the money to help her dad find a cure. Before her father went on life support, Evie told Parade, "We know that is all part of a bigger plan and everything is going to be all right.”

"I lay awake most of the night with my heart racing thinking of my sweetheart and all he was going through and the extent of my love for him and the past 20 years we’ve spent together," she writes. "I prayed for the dawn to come without another phone call and it finally did. He was sustained through the night and to me that is a miracle. It helped me to find my hope again that more miracles can come."

After the results show for America's Got Talent, where Evie learned she would continue on to the finals, "America’s Got Talent made arrangements to get us home immediately," Hillary writes. "We are so thankful to them for their kindness and understanding. Simon isn’t the only one who gets emotional about Evie Clair. Dozens of producers and staff members are going through this challenge with us and we love them for it."