This weekend during conference, we cried, rejoiced, felt spiritual fed, and even laughed together. Here are just a few funny posts that captured how we all felt while watching our Church leaders speak. 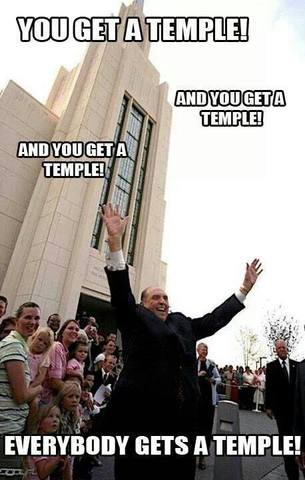 Choir director: I need some inspiration for the choir outfits.
*Looks at the baking supplies*
*Has life changing inspiration*#ldsconfpic.twitter.com/r9LgdPnQhy — Scott Knudson (@ScottTheAmazing) April 1, 2017

My goal is to finish my assignment before you finish yours. #ElderBallard#ldsconfpic.twitter.com/tVyCJ4SAWA — Kaneesha (@kaneesha77) April 1, 2017

People in the city where a temple is announced be like..#ldsconfpic.twitter.com/VH13B0lL0H

Live video from the #LDS Conference Center during #ldsconf after @HollandJeffreyR finished his address. #ElderHollandpic.twitter.com/Vk4Q8zpw7x — The Book of Mormon (@BookMormon2day) April 1, 2017

I have to wait another two hours for more?! The struggle is real! #ldsconf#LDSConference — Ryan Laing (@RyanNLaing) April 1, 2017

People in Utah be like "Thank you!! Finally I don't have to drive 20 whole minutes to get to the nearest temple!!"#ldsconfpic.twitter.com/70NclJ83kF — Scott Knudson (@ScottTheAmazing) April 2, 2017

When your question is answered in a talk but the talk had nothing to do with your question #ldsconfpic.twitter.com/qBWhdnsEJI — gentleman assassin (@maddiewood22) April 1, 2017

Watching #ldsconf is like a breath of fresh air. pic.twitter.com/vB5PdegvSq — The Book of Mormon (@BookMormon2day) April 1, 2017

After the fire went out, the young scout slept freezing for many hours because he was unwilling to spend five minutes of work to unroll, and roll up again, his sleeping bag. Are you "all in"? Elder Gary Sabin #ldsconf #sharelegogoodness

I wish to speak to those who are not members of the Church...