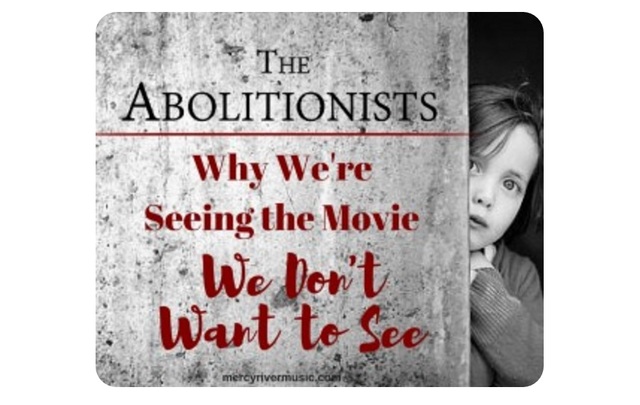 The Abolitionists: Why We’re Seeing the Movie We Don’t Want to See

On May 16th [a new movie will be released in theaters], The Abolitionists– a hidden-camera-documentary about child trafficking. And here’s a disclaimer:

We’re terrified to see this movie.

Those who know Brooke know she’s a happy-ending kind of a gal. She has the Pride and Prejudice Blu-Ray on repeat- and we’re 99.9% positive this movie will not be light, fun, or happy to watch. Soni gets easily overwhelmed about the scary things in the world. And somedays Whitney would like to run to the mountains with her kids and lock them inside and pretend like sad things aren’t happening.

But that isn’t possible, nor is it right.

A few months ago, we sat down with *Tim Ballard and learned of his organization, Operation Underground Railroad. Tim calls himself a modern day “abolitionist,” rescuing children from the horrors of sex slavery. This is something very sad to think about…but after hearing the truth we’ll never be the same. Here are a few things we learned:

–There are 27 million slaves in the world today. That’s more slaves than in the 300 years of the Trans Atlantic Slave Trade combined. 2 million of these are children.
–Human trafficking is the third most lucrative crime in the world and it is the fastest-growing international crime.

Timothy Ballard is the founder and CEO of Operation Underground Railroad. He is also the author of the best-selling book The Lincoln Hypothesis and the new book,The Washington Hypothesis. He will be a speaker at certain Time Out for Women events in 2016. Visit tofw.com to learn more.

Read the rest of this story at www.mercyrivermusic.com