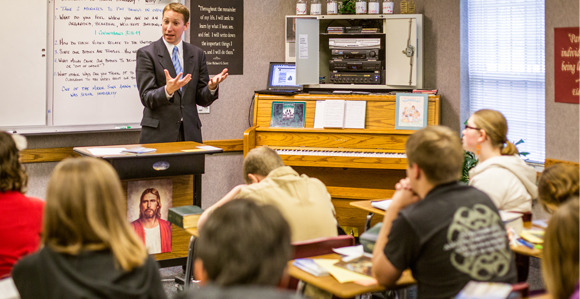 The Chance to Say Yes: A Seminary Miracle

Kenna Stansfield, a junior at Ben Lomond High, loves going to seminary. “It’s like a family in here,” she said. Kenna told of her experience inviting one of her friends to attend so he could see what it was like: “At first he was nervous, … but he really liked it, so he transferred over.”

During Brother Mueller’s five years as principal of Ben Lomond High School, the seminary enrollment has increased from 74 students to 222 currently enrolled students, with an average of five convert baptisms each year. “Being a seminary teacher isn’t just an eight-hour job,” explained Brother Mueller. “There are certain things that are in your job description as a seminary teacher and it’s got nothing to do with knocking on doors for a couple hours a night, but that’s the extra mile.”