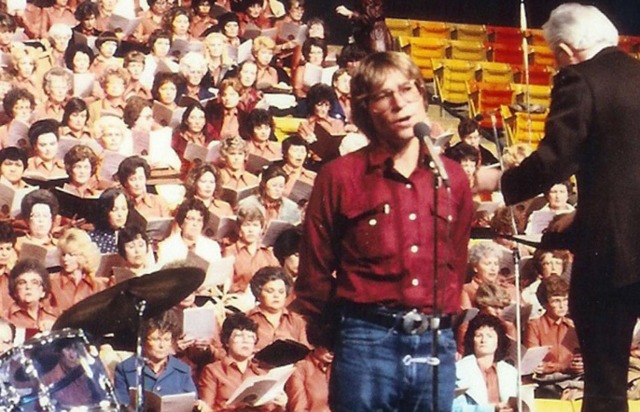 A Grammy and Emmy-award winning choir teamed up with a singer and songwriter who not only gained 16 gold or platinum albums throughout his career but whose humanitarian work continues to inspire thousands today: John Denver.

In my book, that has to be one of the most sacred concerts ever experienced.

Unfortunately, that concert took place over a decade before I was born. That's right. I'm 24 years old. I'm a Mormon. And words can't capture how much I love John Denver.

Let's put it this way, it never feels like Christmas until I play the John Denver Christmas album in its entirety; anytime I have a stressful day, John's the one who helps get me through. I grew up singing "Rocky Mountain High" and "Take Me Home, Country Roads" around campfires; and John Denver's "Annie's Song" was the first song I danced to with my new husband on our wedding day.

So when I heard that John Denver had performed with the Mormon Tabernacle Choir (another group that gives me goosebumps whenever I hear them!), I had to see it or hear it for myself. Since those were the days before YouTube, Facebook, and even the internet, all I came up with was some copyrighted photos with so many watermarks that you could barely make out who was in the picture.

Singer-songwriter John Denver perfomed his song "I Want to Live" with the Choir in 1981. The special performance was for a symposium on world hunger at Utah State University in Logan, UT. #flashbackfriday #fbf

My search was reinvigorated, revealing more about this epic performance. In People's archives, I found this description of the event:

Heaven only knows what Joseph Smith would say, but latter-day Mormon Tabernacle Choir conductor Jerold D. Ottley was delighted to have his 325-member chorus join John Denver in singing "I Want to Live" at a recent World Hunger symposium at Utah State University. "For his own style, he's extremely effective," said Ottley. Denver said he was thrilled too. He came down from his Rocky Mountain high to write the song prior to the two years he served with President Carter's Commission on World Hunger.

Of course, an event like this would be made even more epic by the fact that these 326 musicians teamed up to help fight world hunger. Carol Bittner, a member of the Mormon Tabernacle Choir at the time and a John Denver fan, said of the event, "it was one of the greatest experiences of my life."

Though I couldn't track down any recordings of this particular performance, here's a recording of John Denver singing "I Want to Live" with the Tanglewood Festival Chorus in 1991. While listening to this song, close your eyes and imagine nearly 100 more singers in the chorus filling out John Denver's beautiful melody, and you just might get a taste of what this performance must have been like.