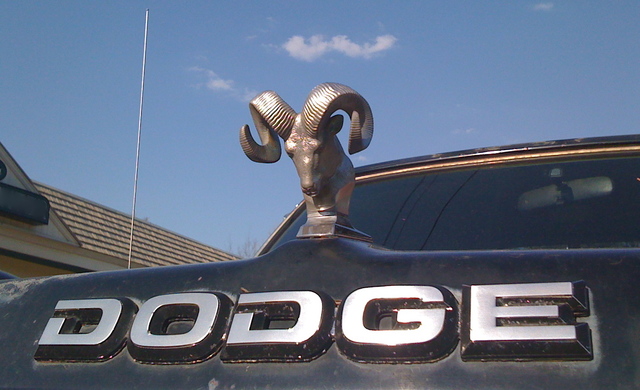 One evening, legendary sculptor Avard Fairbanks got a call from the engineers at Dodge automobile company. As he recalled, "they explained that they had 10,000 cars that needed hood ornaments and they wanted something as attractive as the ornament on a Rolls Royce, but for the cheapest car! I took along my clay and an animal book by my friend . . . and spent the next several days at their headquarters."

Fairbanks went to work. "I suggested a mountain lion, a tiger, a jaguar, and other animals," he continued. "Finally I started modeling a mountain sheep. When the engineers read that the ram was the 'master of the trail and not afraid of even the wildest of animals' they became enthusiastic about the symbol."

But Walter P. Chrysler wasn't quite as convinced—at least, not until he spoke with Fairbanks himself. "I explained that anyone seeing a ram, with its big horns, would think 'Dodge.' He looked at me, looked at the model, scratched his head and said, 'That's what I want—go ahead with it.'"

And so the Dodge ram was born. Fairbanks' idea would evolve beyond that hood ornament, however, and become an integral part of the Dodge logo.

Born in 1897 in Provo, Utah, the late Avard Fairbanks was a faithful and lifelong member of The Church of Jesus Christ of Latter-day Saints. And commercial sculpting wasn't all he did. Early in his life, he was commissioned by the Church to provide four sculptures for the new temple in Hawaii. He would sculpt for the Church throughout his life, including the famous "Tragedy at Winter Quarters," which was placed at Pioneer Mormon Cemetery in Florence, Nebraska. But Avard wasn't the only member of the Fairbanks family to create well-known sculptures. His sons, Grant, David, and Justin all contributed to the famous Eagle Gate in downtown Salt Lake City. At the dedication of the new monument in 1963, President David O. McKay prayed, "May the new eagle, with outspread wings perched on its new beehive . . . receive Thy divine approval and future protection."  The eagle, a bronze bird with a 20-foot wingspan, is a replica of the wooden eagle that sat atop the gate in the days of Brigham Young, and still stands guard over Salt Lake's State Street today.

Lead image the evolution of the Dodge Ram, photo from Wikimedia Commons