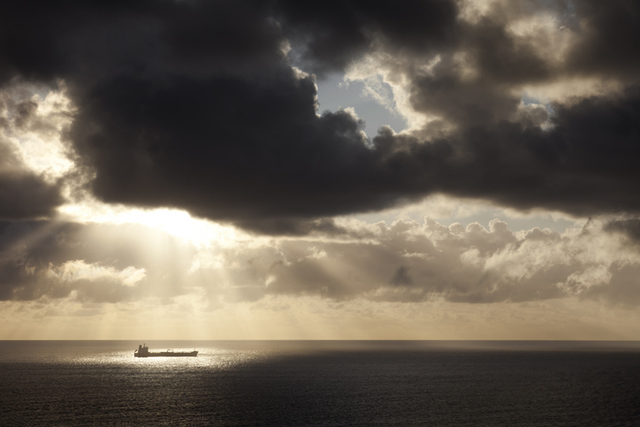 I’ll never forget one early trip to visit the missionaries in Ha’apai and Vava’u. The only boat available was the Pakeina, which was known locally as “the rolling tub.” It seemed to be built to roll and pitch and toss and keep its passengers in constant discomfort, except when the weather was nearly perfect (which it seldom was). Jean was still nursing Gayle but wanted to come along, so she made arrangements for someone to watch the older girls and decided to brave the rolling tub.

The voyage between Ha’apai and Vava’u turned out to be one of the worst I can remember. I had secured the only so-called room on the boat, which was nothing more than a small enclosure with two narrow planks against one wall and a small rail on the other side, called “bunks.” We stayed on deck as much as possible because the air was foul in the tiny closed-in room. The boat left Ha’apai in the early afternoon and rolled and tossed unmercifully hour after hour after hour. I have never ridden a bucking bronco, but I think I know what it feels like.

The roughness of that voyage was unbelievable. . . .

The rolling and jerking of the boat became so violent that we were often thrown out of our bunks and smashed against the floor and the opposite wall only a couple of feet away. I became quite alarmed, as I simply could not stay put in my bunk. I was afraid I might come crashing down on Jean and the baby if they were thrown from their bunk at the same time as I was thrown from mine.

Because of these dangers and the stuffiness of the room, we decided to brave the deck. We cautiously went out on the deck, but when I saw how heavy the seas were I began to worry that if a large wave dashed over us, or if we slipped or were slammed against the rail unexpectedly, we might lose hold of one another or the baby. If someone went overboard, it would be all over. It seemed that all of our options were bad. . . . I had been sick for so long that I was sure there was nothing left to throw up, but my stomach kept trying. It was a long, miserable night. . . .

At one point during the night I turned and looked at Jean and Gayle and felt the trauma and pain they were experiencing. I wanted to get them out of this situation, but there was nothing I could do. “Why did I bring Jean and the baby? Why is this happening? If the Savior calmed the sea of Galilee, why not calm this sea?” On and on went the questions. I was hurting a lot myself, and suddenly a wave of self-pity started to enter my mind.

Right at that moment, however, another influence or feeling flooded my mind. It was as though someone were talking to me— someone who was close to me—someone I knew from somewhere. I couldn’t tell who, but I knew it was a faithful woman who knew me and loved me. Her influence filled my mind in a peaceful yet firm way, and I clearly felt the message: “Do not complain. You have no right to complain. You should be grateful for the opportunity of serving the Lord—of helping to build His kingdom. No sacrifice is too great for His sake. Think of what He did for you. Don’t complain. Don’t even think of complaining.” . . .

I don’t want to overstate the situation, but the contrast was so great that I knew I had been helped by an outside force. I closed my eyes and thanked God for His goodness and help and asked for His protection as we continued our voyage. I expressed my deep appreciation for whoever had influenced my thinking so positively that frightful night.

We made it to Vava’u early the next morning. Apart from being stiff and sore and bruised and having touchy stomachs, we were all fine. . . .

Ancestors Who Sacrificed for the Church

Years later, when I was reading some family history my sister Mary Jane and others had compiled, I came across an account of my great-grandmother Elizabeth Susan Burnett Brunt’s conversion to the gospel. I had heard bits and pieces before but had not paid too much attention. Now, however, I read her story with great interest.

She was born in London and as a youth went to New Zealand, where she married and had several children. She and her husband heard the Latter-day Saint missionaries in Kaipoi, near Christchurch, around 1870 and were almost immediately converted. She had a strong testimony, but her husband was a little less ardent in his faith. As was the custom in those days, the missionaries asked them to gather to “Zion” (at that time considered to be in the western United States). Accordingly she and her husband began making arrangements to leave New Zealand for Utah.

Their efforts took many twists and turns, but from Elizabeth’s point of view the plot was quite simple: since the farm did not sell right away, and since her husband’s enthusiasm for immigrating to Utah was not very great, she knew she either had to go on her own or risk never making it to her Zion at all. She did everything she could to sell the farm, but was unsuccessful. She finally informed her husband that no matter what, she and the children were leaving for Zion in one year. Given this ultimatum her husband made some additional efforts to get ready, but he was not too enthusiastic or successful. Exactly one year later this determined woman took her four small children, bought passage on a steamer (via Sydney, Australia) to San Francisco, from where she would make her way to Salt Lake City. She left her husband to settle their affairs in New Zealand and follow when he could.

I pondered on the faith of that young mother with four small children heading out alone from New Zealand to her desert Zion in Utah, a place she had never seen (at least, not with her physical eyes), to be with people she had never met (at least, not that she could remember). Who knows the hardships, the trials, the discouragements she passed through

One experience she mentioned in her journal illustrates her strength and determination. When the ship docked in Sydney the captain had her and the children stay in some makeshift accommodations on shore while they loaded the cargo bins with grain. The process took several days. She recorded that one night she was awakened just after midnight with a strong impression to go back to the ship immediately. When she arrived, the captain and crew were in the last stages of preparing to sail.

As she took the children to their quarters she heard the captain curse his luck and say, “I thought I was rid of that woman and her four squalling kids.” What else she went through we may never know. Obviously she wouldn’t have made it without extremely strong faith and almost superhuman effort and determination.

Then something really caught my attention. It was a brief comment that at one point on their voyage from Sydney to San Francisco they encountered extremely rough seas and she and some of the children became very ill. As I read that, the whole picture of that journey flooded into my mind. I could literally see them tossing, both physically and emotionally, on that merciless sea of turmoil. She was alone and discouraged and almost felt to complain, but as she prayed she remembered that she was a member of God’s true church and was on her way to Zion. She realized that no problem was too big and no sacrifice too great as long as she achieved her goal and attained her Zion. She promised herself she would never complain, or even think of complaining, and hoped none of her posterity would either.

I was spellbound. I looked at a world map and traced the probable route of her ship. She would have been in almost exactly the same location on the same ocean as Jean and Gayle and I were in— only she was there nearly a hundred years earlier!

I was so overwhelmed with gratitude for the faith of this good woman that I didn’t know what to do. I realized there really wasn’t anything to do except express my appreciation and increase my determination never to complain about anything I was asked to do in the Savior’s cause. I expressed those heartfelt feelings of gratitude through prayer. As I did I felt again some of the same love and peace I had felt on that turbulent ocean in Tonga those many years before.