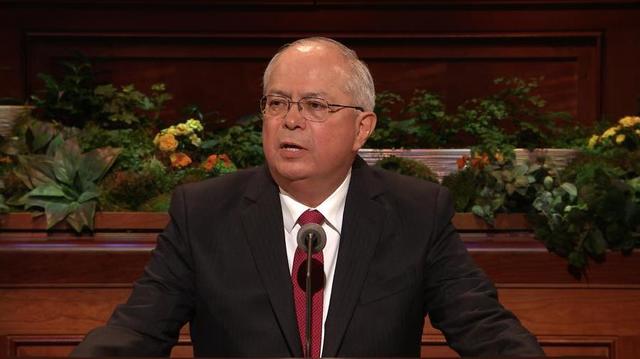 As we begin gearing up for general conference, we will be highlighting past conference talks to help us review, remember, and grow closer to the Spirit so that we can better recognize the Lord's voice and direction this coming October. The following is a small portion of a talk given by Elder Larry J. Echo Hawk in April 2018. (Read the full talk here.)

On a December night in 1982, Elder Larry J. Echo Hawk and his wife, Terry, woke to the sound of their phone ringing in their home in Pocatello, Idaho.

"As I answered the phone, I heard only sobbing. Finally, my sister’s struggling voice said, 'Tommy is dead,'" Elder Echo Hawk shared in his April 2018 general conference talk "Even as Christ Forgives You, So Also Do Ye."

Tommy, Elder Echo Hawk's youngest brother, was driving home from a Christmas party with his wife, Joan, when a 20-year-old drunk driver speeding at 85 miles-per-hour ran a red light in a suburb in Denver, crashing into the couple's car. Both Tommy and Joan died instantly, leaving behind a daughter.

"My wife and I immediately flew to Denver and made our way to the mortuary," Elder Echo Hawk shared. "We gathered with my parents and siblings and grieved the loss of our beloved Tommy and Joan. We had lost them to a senseless criminal act. Our hearts were broken, and anger toward the young offender began to well up inside me."

Though Elder Echo Hawk's heart battled with grief and anger over the unexpected and tragic loss of his brother, one experience helped him find forgiveness.

Sometime after the accident, a hearing was held for the young driver. Both Elder Echo Hawk's parents and his oldest sister, Katy, attended the hearing. Afterward, while Elder Echo Hawk's family was trying to gain control of their emotions, they noticed the parents of the drunk driver were also present. Both of the driver's parents were weeping.

"After a moment, my parents and sister stood up and walked to the driver’s parents and offered them words of comfort and forgiveness. The men shook hands; the women held hands; there was deep sorrow and tears for all and a recognition that both families had suffered immensely. Mom, Dad, and Katy led the way with their quiet strength and courage and showed our family what forgiveness looks like," Elder Echo Hawk shares.

"Only with the help of the Prince of Peace was my painful burden lifted," he shares. "My heart will always miss Tommy and Joan, but forgiveness now allows me to remember them with unfettered joy. And I know we will be together again as a family."