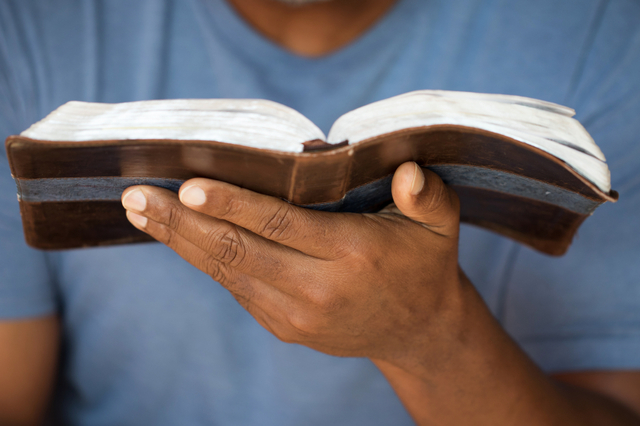 Book of Mormon Lesson 1: "The Keystone of Our Religion"

II. MANY WITNESSES HAVE TESTIFIED OF THE BOOK OF MORMON

The three witnesses and the eight witnesses wrote testimonies that are cited in every copy of the Book of Mormon. They are both remarkable statements but they are very different. It might be worthwhile to consider for a moment why they had different experiences with the plates.

How would people have responded if the only witness were the witness of the three? Theirs is a wonderful testimony founded exclusively in the supernatural.

"His voice hath declared it unto us"

"The engravings . . . have been shown unto us by the power of God"

"An angel of God came down from Heaven"

"The voice of the Lord commanded us that we should bear record."

These were men who claimed to have gone off into the woods to pray, and who said that they saw the plates and an angel and heard the voice of God saying that the translation was correct. A hallucination? Mass hypnosis? Perhaps a drunken reverie?

But what if the only testimony were the testimony of the eight who went one day with Joseph and saw and handled the plates as they lay on a stump. Their language is literal and temporal.

They have "the appearance of gold"

"We did handle [them] with our hands"

"We saw the engravings"

"We have seen and hefted"

Their testimony is so practical, so literal, so simple. Eight men, in broad daylight, saw and handled and examined the plates.

Taken together, these witnesses, and the witness of the Prophet Joseph Smith which follows theirs in the beginning of the Book of Mormon, are a powerful testimony to every person who reads the book, no matter how spiritual or cynical he or she might be.

But there are other testimonies. Our literature is filled with the accounts of those who read and prayed and knew. Here are some examples: (the numbers in parentheses after each account below are from Susan Easton Black, ed.,  Stories from the Early Saints: Converted by the Book of Mormon)

Within a few days of obtaining a copy of the Book of Mormon, Sidney Rigdon knew, by direct revelation, that it was true.  "Flesh and blood hath not revealed it unto me, but my Father which is in heaven" (p. 68).  Luman Shurtliff "heard a sweet melodious voice" testify to the prophetic calling of Joseph Smith and the truth of the Book of Mormon (pp. 71‑72).  Harrison Burgess testified that "a glorious personage clothed in white" came to him and showed him the plates from which the Book of Mormon had been translated (p. 27). Benjamin Brown found himself strongly rebuked by two of the Three Nephites for his lack of faith in the Book of Mormon, and then heard "the Spirit of the Lord" say to him, "Now, you know for yourself!  You have seen and heard!  If you now fall away, there is no forgiveness for you" (p. 31).  The angel Moroni appeared to Oliver Granger and testified to him of the truthfulness of the book (p. 10).

Such joy, however, was not always the immediate reaction of those who came to know the truth of the Book of Mormon. The case of Daniel Spencer, Jr., illustrates this well. In 1840, he was a highly successful businessman in West Stockbridge, Massachusetts. Then the missionaries arrived. He listened to their message and gave it serious consideration. One day, while his son was with him in his study, he suddenly burst into tears and cried out, "My God, the thing is true, and as an honest man I must embrace it; but it will cost me all I have got on earth." Nevertheless, he accepted baptism and moved to Nauvoo, where he eventually succeeded Joseph Smith as mayor of the city.

To this I add my witness, just as you will add yours. I know the Book is the work and the word of God. The witness of its divine origins came to me in 1965 as I sat reading 2 Nephi 4. It came again as a quiet, penetrating affirmation as I knelt alone late at night with the book in my hands. It came as a part of the most powerful experience I have ever had with the Spirit. Therefore, to the witness of Oliver and David and Martin and the others, I add my own. And I express my willingness to share that witness with anyone who will hold still long enough to listen.

III. THE BOOK OF MORMON WAS WRITTEN FOR OUR DAY.

The plates were buried for 1400 years. The labor of engraving and preserving was not performed for those whose lives and histories are given in the thousand years of history, nor for those who lived soon after. This book is for us. This reality is best expressed by Moroni, but it is alluded to throughout the book. Moroni said:

Behold, the Lord hath shown unto me great and marvelous things concerning that which must shortly come, at that day when these things shall come forth among you.  Behold, I speak unto you as if ye were present, and yet ye are not. But behold, Jesus Christ hath shown you unto me, and I know your doing (Mormon 8:34,35).

The title page mentions this truth—that the book was written with us in mind: "Written by way of commandment, and also by the spirit of prophecy and of revelation."  Why write by the spirit of "prophecy and revelation" unless you are writing for the future? It was for this reason that the book was "sealed up" and "hid up" until the time that the work should come forth to those who needed it most.

Why do we have such a great need? For at least three reasons: (1) In a world that retreats from the concept of absolute truth, or religious truth of any kind, this book gives us a chance to know the "truth of all things." (2) In a world turning away from a belief in the divinity of Christ, this book offers "Another Testament of Jesus Christ"—an independent and inspiring witness of his divinity and atonement. (3) In a world with 5,000 different religions and denominations, where even the meaning of the words of God in the Bible are misunderstood, this book teaches us how to conform to his will.

IV. THE BOOK OF MORMON CAN BRING US NEARER TO GOD

The Book of Mormon has power to change human nature. Joseph's promise that abiding by its precepts will bring us closer to God is a promise that has been repeated many times by other prophets.

Elder Spencer W. Kimball said of this book in 1963,

But after all, it is not the book's dramatic crises, its history, its narrative that are so important, but its power to transform men into Christlike beings worthy of exaltation (Spencer W. Kimball, Conference Report, April 1963, p.6).

I have felt that transforming power in my own life. I suspect that you have too.

President Benson, who may have been the greatest advocate this book has had since Joseph Smith, said something very similar about the study of the Book of Mormon:

The Book of Mormon will change your life. It will fortify you against the evils of our day. It will bring a spirituality into your life that no other book will. It will be the most important book you will read in preparation for a mission and for life. A young man who knows and loves the Book of Mormon, who has read it several times, who has an abiding testimony of its truthfulness, and who applies its teachings will be able to stand against the wiles of the devil and will be a mighty tool in the hands of the Lord (Ensign, May 1986 p. 43).

President Hinckley said it this way:

Without reservation, I promise you solemnly that if each of you will observe this simple program, regardless of how many times you previously may have read the Book of Mormon, there will come into your lives an added measure of the spirit of the Lord, a strengthened resolution to walk in obedience to His commandments, and a stronger testimony of the living reality of the Son of God (Gordon B. Hinckley, Faith, the Essence of True Religion, p. 64).

After the first of the Star Wars movies appeared, I appropriated the name of a robot in the film to use as an acronym to assist in studying the scriptures in a way that would enhance the power of the book to transform lives. The robot’s name was Seethreepio or C3PO. I wrote it for my students like this:

C=Commitment—make a commitment about when and where and for how long you will study.

P=Prayer—Pray before you read and as you read. "Heavenly Father, help me understand the messages that are meant for me.  Help me know the truth of these things . . ."

P=Pencil—Mark the scriptures as you read. Turn them into a treasure map so that you can return at appropriate times to review the things you have learned. Take notes and record insights in your journals.

P=Ponder—Take time to think about what you have read and to ask yourself some questions: Why is this account or story or verse or word in the book. Since the book contains only "the hundredth part" of what was available to Mormon, why did he include this? And what does it mean to me?

O=Obey—Do the things the scriptures and the Spirit teach you to do.

If you read this book of scripture regularly and in this way, with prayer and a pencil and pondering, and with a determination to do what you are taught to do, the Book of Mormon will truly transform your life. Of that I am a witness.

As you study this book, a witness of its divinity will come into your hearts, again and again. This is a spectacular blessing, but it is not the destination of this journey. Knowing the book is true is important, but it is, for all of that, less important than what else we know when we know the book is true. For you see, if the Book of Mormon is true, then Jesus Christ is the Savior of the world, and Joseph Smith was his prophet, and the Church of Jesus Christ is restored again on the earth. If it is true, then we are accountable for the teachings and the doctrines and the instructions and the injunctions given in its pages. It is in a quest for those teachings and doctrines and instructions and injunctions that we come searching. They are the treasures that will show us the way to eternal life, and “he that hath eternal life is rich."

A NOTE FROM THE TEACHER:  I want these lessons to be useful to you. I want, as much as possible, to meet your needs and expectations. Please feel free to contact me with concerns and suggestions and insights and inquiries. My email address is tedgibbons@yahoo.com. Have a great year!