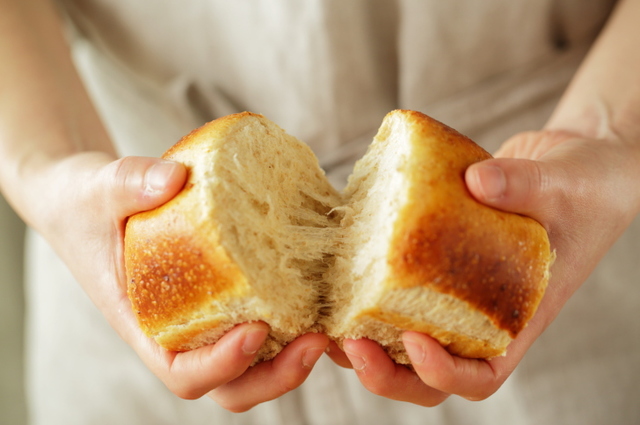 It was 4:50 in the morning, and I had approximately three minutes to eat something before leaving for my very first temple shift. I raced through a dark kitchen on my tiptoes and wolfed down a banana that had been sitting on the table. Worried that I wouldn’t have enough food in me to last throughout the day, or enough patience to eat a second banana, I looked to the slightly squished loaf of Western Family bread on the kitchen counter and felt a glimmer of hope. Bread’s filling, I thought. That should sustain me for awhile, right? Having barely enough time to snarf down a single slice, I ate one and ran.

Two hours later, in the quietest parts of the temple, my stomach made a noise similar to what it would sound like if every creature in Return of the Jedi had been thrown in the Sarlacc pit. Obviously, that single piece of bread had not filled or sustained me. It maybe had momentarily, but not long enough to make a difference or end my hunger.

As I thought about that little piece of bread and how I had expected it to fill me, I was reminded of the story of the loaves and the fishes in the New Testament and struck with new insight.

Picture it with me: the Savior has just heard of the passing of His good friend John the Baptist. Overcome, we can assume, by grief for His friend and the desire for solitude, He tries to get as far away as He can with His disciples. He, in fact, gets on a ship that takes them into the desert, almost literally the middle of nowhere. The people, hearing that the Savior has left, follow Him. These people are so desirous to be with the Savior that they don’t even think to take a boat or wagons — they follow Him “on foot out of the cities” (Matthew 14:13), leaving their homes and provisions behind to walk for who knows how long to get to Him. When they arrive, Christ, in His infinite compassion and in spite of being in the midst of His own trial, goes among them, healing their sick and afflicted.