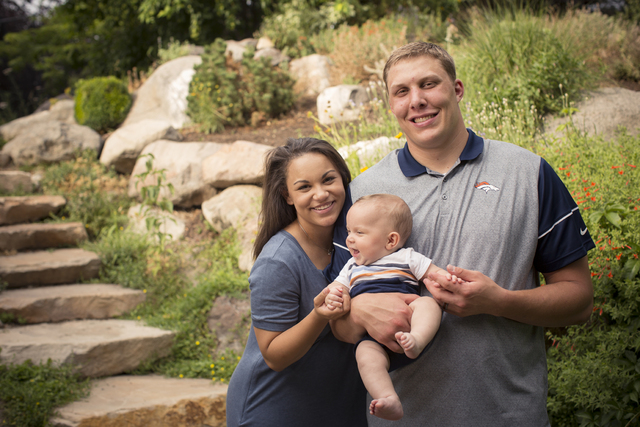 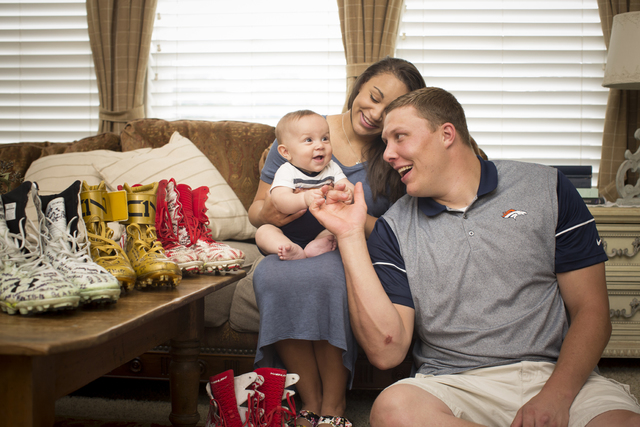 When Garett left Snow College, he could have gone practically anywhere in the United States, but he wanted to find a football program that encouraged players to live their faith. That’s why he committed to the University of Utah. With coaches who cared about him and institute teachers and pastors offering prayers and inspirational messages before games, Garett knew he had found the right fit.

While his football career was growing at the University of Utah, Garett’s family expanded as well. Natalie and Garett welcomed their son, Kingston, to the family. “There was such a spirit in the room. Just holding him in my arms, [I knew] I want this little boy with me for eternity,” Natalie shares.

In January 2017, Garett and Natalie were sealed in the Payson Utah Temple. “That was another dream come true, and it was awesome because we had our son there with us,” Garett says. “He is the best thing that has ever happened to me.” “Having Kingston on the altar, he was smiling the whole time, and I just started to cry, [knowing] this is my forever family,” Natalie adds.

Just a few months after the Bolles family was sealed, Natalie and Garett found themselves in Philadelphia, Pennsylvania, sitting through one of the tensest nights of their lives. That year, after agonizing over the decision to stay with the U of U or declare for the draft, Garett finally received his answer in the temple: “Act in faith.”

After declaring for the draft, Garett was one of only 22 potential recruits invited to attend a special draft event. But right before the Bolles family flew to Philadelphia, they received bad news: rumors had started circulating about Garett’s learning disability, hurting his chances of landing a first-round pick. The family now debated whether or not they should attend. After praying, Garett decided to go, and Emily continued praying that “God would be present,” no matter what the outcome. Arriving at his hotel, Garett found immediate reassurance when he looked up and saw the Philadelphia temple directly across the street.

“Every time we walked down to where the draft was being held, we had to walk under the shadow of the temple, and I just kept thinking to myself, ‘this is such a witness. God is in this,’” Emily says. The night of the draft, Garett, Natalie, the Freemans, and Grove sat around a table, staring at a phone as TV cameras swarmed around. Tension hung heavily, the nervousness palpable as the prospects stared at their phones, willing them to ring so they could learn which teams they would play for.

The first 10 picks went by, and Garett grew anxious. Then picks 13, 14, 15. Nothing. Garett came and went from the bathroom several times, his nerves faltering. At pick number 17, Garett bowed his head and began praying, determined to turn his worry over to the Lord. At pick 20, the phone began to ring. Natalie yelled, “Answer the phone! It’s Denver. Answer the phone.” But Garett could hardly move because he had broken down into tears.

Spending the morning looking over these memories and trying to soak it all in. Things I want to remember from this moment...How a boy with a dream can overcome anything. How learning disabilities don't have to hold you back. How God will perform His great purposes in you. 🏈🏈🏈Natalie won the MVP of the week. Kingston stole the stage. And Garett proved what he always said he would...he's living his dream. Love you @gbolles74 @n_bolles and baby Simba. Dad and I couldn't be more proud ❤️🏈❤️#faithfamilyfootball #bollesfamilymotto #garettsstory #broncos #nfldraft

When Garett first declared for the draft, it was predicted he would land in the top 10 NFL picks. But when news broke about Garett’s learning disability and his future seemed uncertain, Garett wondered why the Lord would allow this to happen after he worked so hard to follow His will.

But when Garett answered the phone to speak to the coach of the Denver Broncos, everything fell into place. He would be returning to the state where he served his mission. He would sign with an NFL team that prided themselves on focusing on faith and family. He knew the Lord had orchestrated this moment. He knew this was meant to be.

“We thought that we were going to go to other places, but the Lord knows where you are supposed to go at all times, and if you take care of the small, simple things, and if you put Him first in everything that you do, [then] football is going to take care of itself,” Garett says.

Now settled in their new home in Denver, Natalie and Garett have found ways to keep the gospel an active part of their daily lives. “Garett has Tuesdays off, and we’re going to try to make that our temple day,” Natalie says. “We read scriptures together every night no matter where he is, and we pray together before bed.”

Garett remains close to his father and siblings, as well as all those who helped him along the way. Before every game, Garett makes sure to call his wife, his dad, and Emily to remember where he came from and all he stands for.

“Just because [Garett] went to the bishop that one day and decided he was going on a mission, it doesn’t mean his life has all worked out since that day,” Emily says. “But God has been a part of his life since that day. Garett’s such a great example that God doesn’t want just perfect people. He’s going to meet anybody where they are exactly as they are, but He doesn’t intend to leave them there. Garett’s has been a journey of just becoming better every single day.” 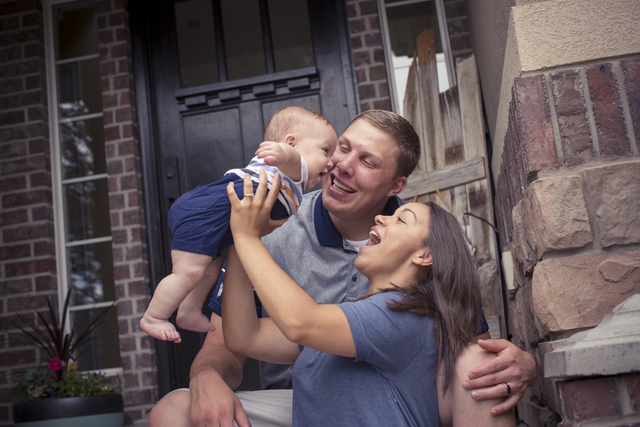 Looking back at his journey from a homeless teen with nothing to an NFL player with a four-year contract, Garett knows he could never be the man he is today without God in his life. “I use [the Atonement] daily,” he says. “I’m not perfect, nor do I want to be perfect, but I strive to be more perfect. And that’s what I want people to know—those people that struggle out there with, you name it, [an] eating disorder or learning disability or depression or anxiety, it’s okay. It’s okay to struggle from those things, but it’s what you’re going do with that struggle and what you’re going to do afterward that counts.”

Images from Instagam and by Jed Wells