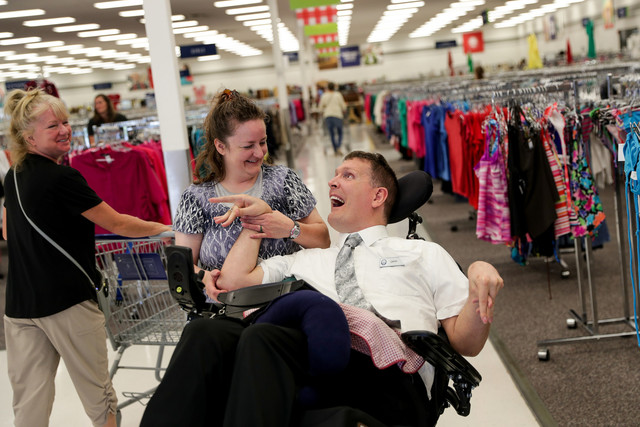 Sporting a white shirt, tie, and name tag, Orin Vooheis sat in his electronic wheelchair smiling at people as they entered the American Fork Deseret Industries on July 11. As always, his wife Chartina was by his side.

During their morning hour of greeting, a woman approached the couple and asked if she could take a photo with Orin. She explained that nine years earlier she had come to the D.I. with her son who was then dealing with some personal challenges. Orin Voorheis welcomed the family. His upbeat friendliness lifted the 12-year-old boy’s spirits and left a positive lasting impression.

Nearly a decade later, the woman thanked Voorheis and walked away eager to tell her now 21-year-old son about their encounter.

“We had no idea. We were just out in public, doing our thing. Perhaps if we had decided to stay home and not get out, it wouldn’t have happened,” Chartina Voorheis said. “Sometimes we can bless people in ways we don’t know.”

Orin Voorheis has been a blessing in many lives, thanks to his survival 21 years ago.