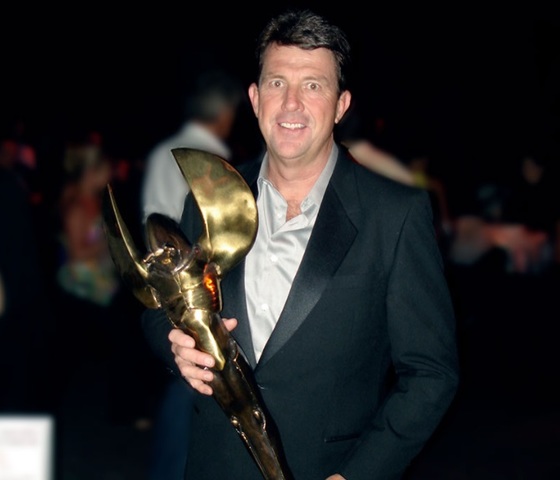 Craig Hosking is an LDS film pilot and aerial coordinator in Hollywood. Over the years he’s worked on more than 150 films and TV shows, a few of which include Dunkirk, Interstellar, Spectre: 007, The Dark Knight Rises, Pirates of the Caribbean: Dead Men Tell No Tales, and Star Trek: Into the Darkness.

“I was just obsessed with it,” Hosking says.

Hosking’s father owned an airplane and helicopter charter company focused on mountain utility work, such as putting out forest fires, oil and mineral exploration, power line construction, and ski contracts. Hosking believed he would one day inherit and run his father’s business.

He took a two-year break from flying to serve two years in the New Zealand Christchurch Mission.

“I went from a helicopter pilot for my dad’s company to a lonely, tired young man," he says. "That’s when I really got to know the Lord and understand how He answers prayers.”

When Hosking returned from his mission, he continued to work with his father’s company, but he also felt the itch to do something on his own. He started flying in airshows.

Hosking and his friend Dan Sorensen, from Sky Park Airport in Bountiful (who is featured in the latest Meet the Mormons standalone film), even modified an airplane so that it had wheels on both the top and the bottom. They called it “Double Take” because it allowed the pilot to take off or land from either a right side up or upside down position.  “Nobody in the world had ever done anything like that,” Hosking said. 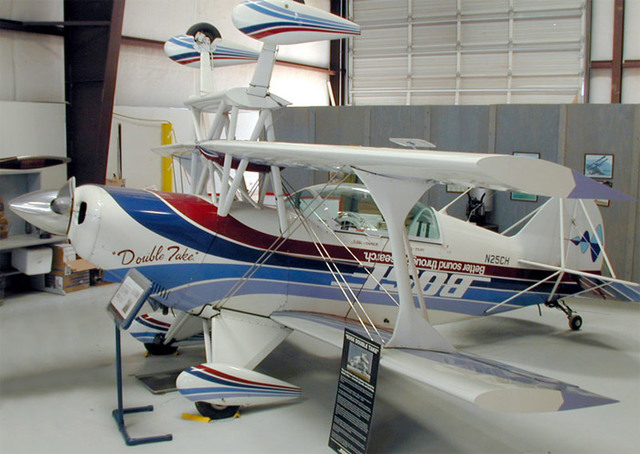 Hosking's airplane "Double Take," which can land right side up or upside down.

Hosking felt blessed to have his own side career doing airshows, as a recession in the mid-'80s completely put his father’s company under. He was grateful to have a job, but he also knew that he didn’t want to do airshows forever. Most airshows were on the weekends, and it wasn’t compatible with his long-term goals as a father and member of the Church.

Not only did Hosking grow up with airplanes and helicopters but also with cameras, film, and a darkroom in the basement of his home. His father did photography as a hobby, and his affinity for the visual arts rubbed off on his son.

Several of Hosking’s father’s friends had been film pilots. It was a small niche field then, as it is now, but Hosking thought that if he gave it enough time and effort, he might be able to break into the field.

He devised a four-to-five year plan: he would travel to Los Angeles for two weeks every six months to meet people and make connections. Hopefully, in the end, he would be able to build a big enough network that he could find a break in Hollywood.

In reality, Hosking had a job after just three days in Hollywood.

In 1987, Hosking moved his family to LA and began representing Tom Friedkin’s aircraft company Cinema Air, hunting down film jobs that needed helicopters. Starting out, Hosking still didn’t know anybody in Hollywood, but he had a mandate to find work for the company, so that’s what he did. “I would sneak onto studio lots and pretend like I knew what I was doing,” he said.

Hosking’s reputation in Hollywood began to grow. In addition to representing Cinema Air, he also began taking side jobs piloting film aircraft. It quickly became apparent that he had a great eye for film, in addition to skills as a pilot. 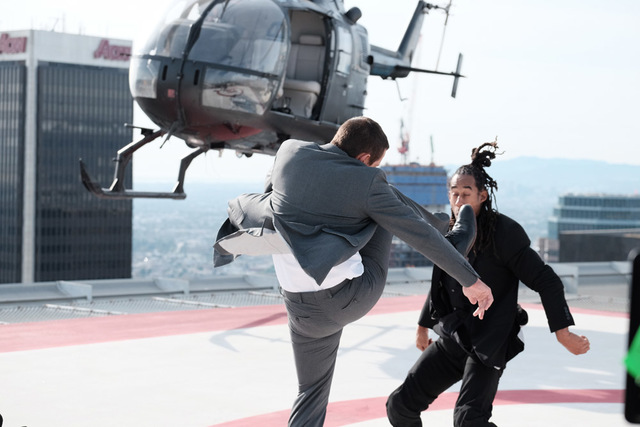 Hosking filming a fight scene for a Geico commercial.

Eventually, Friedkin let Hosking go, giving him his blessing to work as a full-time aerial freelancer by selling him a helicopter under market value. “He gave me a wonderful career opportunity. . . . [He] is a wonderful man who helped my career a lot,” Hosking says.

Although Hosking’s career took off quickly, he was determined that working in Hollywood would not take away from his devotion to his two children or his faith. As a freelancer he could take or leave any job, and many times he would reject glamorous out-of-town projects so that he could stay close to home and be a dad. 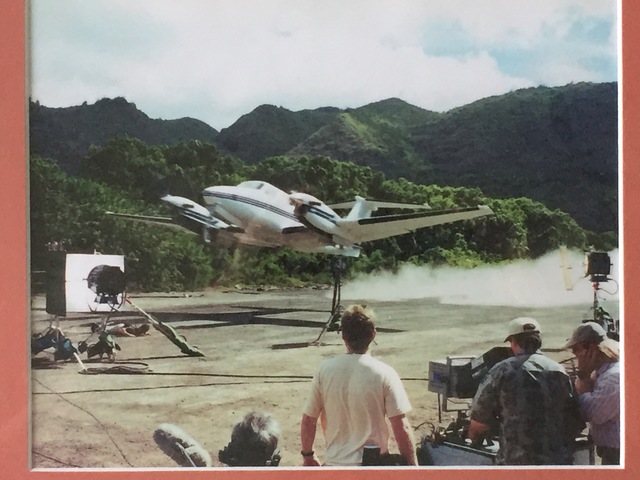 “A real epic time in my life came when my kids were young and I was offered a movie called Black Hawk Down. They wanted me to go to Morocco for about six weeks, and at the time I was coaching my son’s roller hockey team,” Hosking said. “I just decided to stay home and coach roller hockey. . . . I didn’t want to miss being a dad.”

In earlier years, colleagues would mock Hosking’s non-drinking habits, and even today he finds that being offered a cup of coffee immediately means a missionary opportunity.

Hosking also chooses to work on movies and projects he feels fit his values. Having worked in Hollywood for decades, Hosking has seen firsthand how ratings can be manipulated, so he chooses his projects not based on rating but based on the script and content.

Now that Hosking’s children are grown, he has no problem taking large films that take him out of the country for a few months at a time. He estimates that he’s been to church in over 30 countries.

Eleven years ago, Airport Journals praised Hosking, saying, "For the past 20 years, Hosking has been one of the most hard-working and sought-after pilots in the film business, racking up a resume that most traditional actors envy."

Since that time he's only become more well-known and prolific, working on movies such as Interstellar, The Aviator, Inceptions, Spectre: 007, The Dark Knight Rises, American Sniper, Pirates of the Caribbean: Dead Men Tell No Tales,  Star Trek: Into the Darkness, multiple Mission Impossibles, Indiana Jones 4, Clear and Present Danger, several Jurassic Park films, Executive Decision, Miami Vice, Space Cowboys, Alaska, The General’s Daughter, and the Sum of All Fears, just to name a few. With over 150 features and 200 commercials under his belt, Hosking has had many unique experiences, including flying in close formation with the Stealth Bomber and the President’s Air Force One 747 and filming from the back seat of an f-14 in supersonic flight.

One of his latest big projects was Dunkirk, a historical film about the evacuation of Dunkirk beach during WWII. 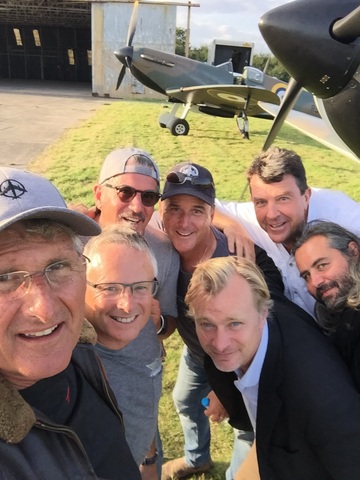 Hosking has high hopes for Dunkirk in the Oscars this year.

“We’ve received a lot of great reviews," Hosking said. Rolling Stone reported, "The aerial sequences are like nothing you've ever seen" and GQ said, "I've not seen aerial or photography of aerial fighting done that well ever before."

Hosking said that the most meaningful projects, however, are those he’s done for the Church.

Co-directing the Polynesian Cultural Center Theater film was a special project for Hosking because he’d served among the Maori people on his mission in New Zealand. He was able to use his cultural knowledge to reshape the structure and script for the film and turn it into what it is today—an experience in traditional Hawaiian culture that takes place inside of a constructed volcano.

He has worked on many other films for the Church, including one for the Palmyra Visitor’s Center in which he had a special spiritual experience filming in the Sacred Grove.

Hosking explained that getting aerial footage in the Sacred Grove is tricky because if the helicopter is too close to the scene, it will blow all the leaves around.  To get a good shot they had to dangle the camera on the end of a long cord attached to the bottom of the helicopter. 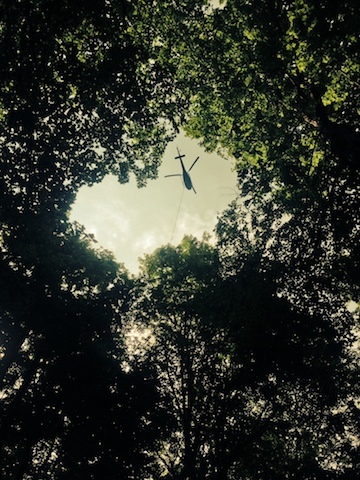 As Hosking piloted the helicopter and looked down at the actor portraying young Joseph kneeling in the Sacred Grove, it changed his entire understanding of the First Vision. At that moment, he caught a glimpse of the restoration from Heavenly Father’s point of view as he descended on the grove from above.

“How exciting it must have been for them,” Hosking said. “[It was a] really, really powerful experience.”

Hosking looks forward to continuing to work on large film projects in the years ahead. He's always excited for what's next. "Every [project] is a big exciting new and different adventure, so that’s the fun of my job. Whatever I get to do next month is as fun as the one last month." Hosking's son is also an aerial cameraman, and Hosking enjoys working with him on some projects. 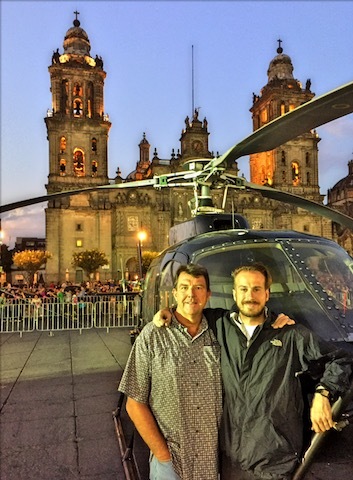 Craig Hosking and his son on the set of James Bond Spectre in Zocalo Plaza in Mexico City.

Hosking is also thrilled to be a member of the Academy of Motion Picture Arts and Sciences. Even though he is one in 7,000 on the Academy, he is the only pilot who has ever been invited to join, and he’s eager to participate in deciding which films are nominated and awarded. “Being a little influence for good in the Academy is important to me,” Hosking said.

Hosking’s goal is to “continue to serve the Lord with whatever opportunities that come my way.” He hopes that someday that will mean serving a second mission. “I definitely have a lot more missionary in me,” he said.