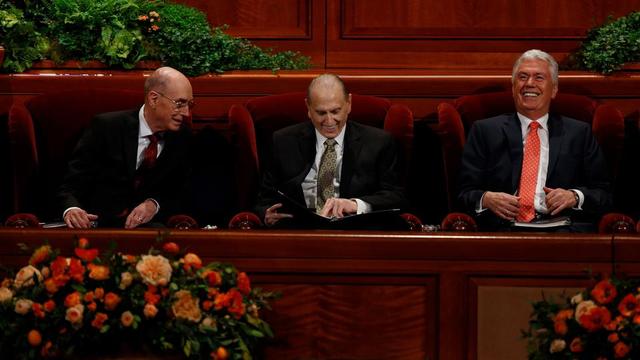 The following is an excerpt from His Majesty and Mission.

Beginning with the May 2014 Ensign (containing the contents of the April 2014 general conference), there was a significant shift. In that April 2014 conference, one topic was addressed in 15 talks, with 10 of those by members of the Quorum of the Twelve and the First Presidency—a combined total of 25, which nearly doubled the average of the leading topic in the previous 12 conferences. In the ensuing October 2014 conference, that same topic was addressed 19 times, with 11 of those talks being given by prophets, seers, and revelators—a combined total of 30.

This dramatic shift may well be the result of an editorial decision to use a more comprehensive and accurate method for categorizing the topics addressed in general conference—as my guess is that the Savior has been a major focus of general conference remarks for quite some time. But there can be little doubt that one of the major areas of focus for conference speakers in the past few years, especially members of the Quorum of the Twelve and First Presidency, has been the Lord Jesus Christ.

In one sense, that topic has been the main focus from the beginning of this dispensation. Jesus Christ is the core message of the restored gospel, the irreducible center of all we believe. As we read in section 76 of the Doctrine and Covenants, “And this is the gospel, the glad tidings, which the voice out of the heavens bore record unto us—that he came into the world, even Jesus, to be crucified for the world, and to bear the sins of the world, and to sanctify the world, and to cleanse it from all unrighteousness.” . . .

Further evidence that the message of Christ has been the central focus of prophets, seers, and revelators from the beginning of this dispensation to the present is found in the fact that Elders D. Todd Christofferson and M. Russell Ballard included the following statement from Joseph Smith in their April and October 2014 conference addresses, respectively: “The fundamental principles of our religion are the testimony of the Apostles and Prophets, concerning Jesus Christ, that He died, was buried, and rose again on the third day, and ascended into heaven; and all other things which pertain to our religion are only appendages to it” (Teachings of Presidents of the Church: Joseph Smith (Salt Lake City: The Church of Jesus Christ of Latter-day Saints, 2007), 49).

It is instructive to note that Joseph Smith focused on the testimony of the apostles and prophets concerning Christ, rather than on just the facts concerning Christ and His mission. There is special power and impact in the testimony prophets and apostles bear of Christ, for they are called to be “special witnesses of the name of Christ in all the world—thus differing from other officers in the church in the duties of their calling” (Cecil O. Samuelson, “The Testimony of Jesus Christ,” in Celebrating Easter: The 2006 BYU Easter Conference, ed. Thomas A. Wayment and Keith J. Wilson (Provo, UT: Religious Studies Center, 2006), 12). Thus, it is not surprising that this has been their focus at general conference and in all their ministry. . . .

Gratefully, we do not need to fully understand Christ’s Atonement in order to benefit from it. I say gratefully because our finite minds cannot completely comprehend a sacrifice whose breadth and depth are infinite. As Elder Richard G. Scott put it, “No mortal mind can adequately conceive, nor can human tongue appropriately express, the full significance of all that Jesus Christ has done for our Heavenly Father’s children through His Atonement.”

Still, it is important and profitable for us to contemplate the monumental events of that sacrifice in an attempt to increase our limited comprehension, for such understanding can both better fit us to take full advantage of that infinite offering and provide us with the perspective and strength we need to endure the vicissitudes of life that inevitably occur. . . .

Christ not only currently leads His Church, He is also active in our lives today—if we let Him. He knocks at the door and waits for us to invite Him into our lives, and when we do, we will find the truth of the apostolic witness that “His way is the path that leads to happiness in this life and eternal life in the world to come.” May we join those same witnesses in heartfelt expression: “God be thanked for the matchless gift of His divine Son” (“The Living Christ”).

Get more profound insights with His Majesty and Mission.

Strengthen your knowledge and testimony of the Savior by reading the words of inspiring speakers who expound on His life, His mission, His Atonement, and His influence in your life today. This timely volume includes talks given by six well-known speakers — Sheri Dew, Kevin J Worthen, Camille Fronk Olson, Eric D. Huntsman, Daniel K Judd, and Hank Smith — as originally presented at Brigham Young University's annual Easter Conferences in 2016 and 2017.