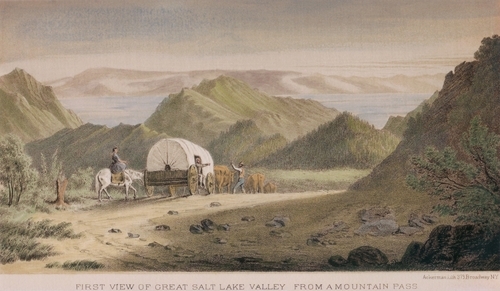 The Myth About Brigham Young's "This Is the Place" Quote

by Casey Paul Griffiths, Mary Jane Woodger, and Susan Easton Black, excerpted from "What You Didn't Know About the 100 Most Important Events in Church History" | Jul. 24, 2017

Departing from Fort Laramie, a vanguard company of Saints, including President Brigham Young, trekked across the high plains of Wyoming, passing such landmarks as Independence Rock, Devil’s Gate, and South Pass. During this phase of the journey, the pioneers encountered Jim Bridger, the legendary mountain man who offered advice and encouragement about the unfamiliar territory stretching before them. Bridger spoke optimistically, though cautiously, about the Salt Lake Valley. Wilford Woodruff recorded, “He spoke . . . highly of the great Salt Lake for a settlement,” but warned “there was but one thing that could operate against it . . . that would be frost.”

With Bridger’s warning still ringing in their ears, less than two days later the party met Sam Brannan, the colorful leader of the Saints who had sailed around the horn of South America and settled in northern California. Brannan brought tales of the ill-fated Donner-Reed party and gave a full-fledged sales pitch to Brigham Young and others of the beautiful, temperate country on the Pacific Coast. Brigham listened with cautious skepticism but remained undeterred in his search for a new home in the Rocky Mountains.

As the vanguard company neared their chosen destination, danger stalked the camp. Rocky Mountain fever, an illness spread by ticks and characterized by chills, a hacking cough, severe headaches, acute pains throughout the body, fevers, and delirium, proved debilitating and sometimes deadly.

Elder Heber C. Kimball, second in command of the camp, asked that the pioneers “humble ourselves before the Lord that we may obtain power with him to turn away sickness and disease from our midst.” Elder Wilford Woodruff said, “The devil was constantly striving to hinder our progress and thwart the purposes of God, and now, by causing the President to be sick, hinder our getting through in time to return to our families.”

With Brigham Young languishing, Heber C. Kimball sent Orson Pratt, John Brown, and a few others in an advance party to locate the Salt Lake Valley. Elder Pratt and his small group entered the valley on July 20. After counseling with them on their return, Brigham declared, “I know it is the spot and we have come here according to the suggestion and direction of Joseph Smith who was martyred. The word of the Lord was to go to that valley and the best place you can find in it is the spot. I prayed that he would lead us directly to the best spot, which he has done, for after searching we can find no better.”

The still weak but recovering Brigham Young saw the Salt Lake Valley for the first time on July 28. According to the familiar story, Brigham Young gazed at the view and remarked, “This is the right place; drive on.”

There is little evidence from the vanguard company that Brigham made this proclamation, however. If he did, it went unrecorded in the contemporary accounts of the event. Though President Young’s exact words on the occasion might not be known, Wilford Woodruff summed up Brigham’s reaction to seeing the valley: “President Young expressed his full satisfaction in the appearance of the valley as a resting place for the Saints and was amply repaid for his journey.” 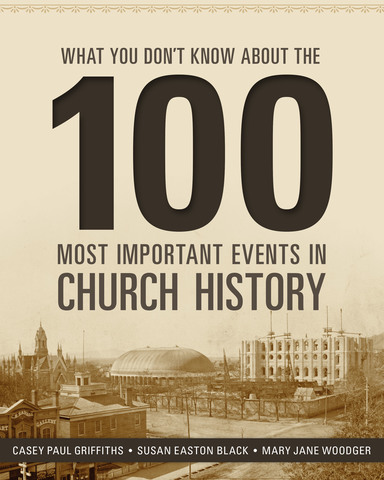 BYU Church history professors Casey Paul Griffiths, Susan Easton Black, and Mary Jane Woodger have written engaging vignettes about our history, ranging from familiar events, such as the First Vision, the trek west, and the origin of Primary, to not-so-familiar events, such as the retrenchment movement, the political manifesto, and the beginnings of seminaries and institutes.

In 100 short chapters, you'll discover intriguing facts about the Church you didn't know before, gain a greater appreciation for the role of living prophets in the unfolding restoration of the gospel, and learn more about lesser-known and surprising events in the history of the Latter-day Saints.