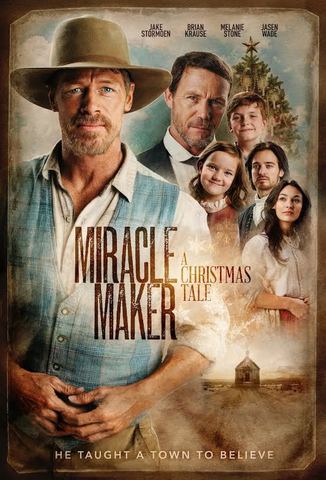 A delightful full-length feature film about a turn-of-the-century Western town in desperate need of a Christmas miracle is releasing on DVD on November 3.

In their longstanding commitment to developing faith-based films, Covenant Communications has joined Paulist Productions and Mainstay Productions to produce Miracle Maker, a family film that will resonate with people of all ages. The DVD will be available at Costco, on Amazon, at Deseret Book and Seagull Book, and wherever LDS products are sold.

The residents of Woodhaven are feeling discouraged—work is scarce, money is low, love is lagging, and spirits are down. Then a mysterious telegraph arrives, and a handsome stranger walks into town with nothing more than his dog and a chicken. Throw in a mean-spirited landlord, a love-sick preacher, a pair of delightfully charming old biddies, and an enchanting little girl—and what happens next will warm the heart and create a healthy dose of the Christmas spirit as the entire town is changed for the better.

Miracle Maker—based on a story written by Covenant author Ann Acton—shows what happens when seeds of love are planted and people create their own miracles by performing acts of service.

John Lyde and Sally Meyer once again combine their talents as director and screenwriter. The two have previously collaborated on popular films Christmas for a Dollar, Christmas Oranges, He Knows My Name, Abide with Me, Minor Details, and You’re So Cupid.

“It’s my hope that after watching Miracle Maker, families will understand that you can make your own miracles,” Lyde says. “Our message to audiences is that if you need a change in your life, you can create the change yourself.”