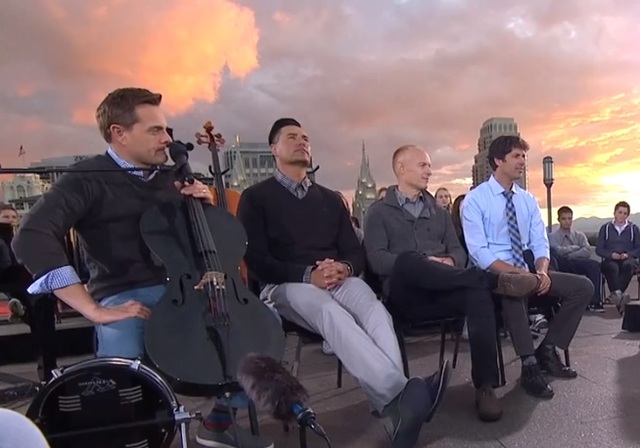 Did You Know The Piano Guys' LDS Standards Are Protected by Their Sony Contract?

Years ago, back when The Piano Guys was a piano shop, not an internationally known performing group, the owner of that shop, Paul Anderson, had a great idea to boost his sales: have Jon Schmidt and other famous artists perform on his instruments in incredible places.

The endeavor failed dismally in its goal. In two years, not one piano was sold.

Yet, in that time, the small group of performers marketing these pianos had 50 videos with over 700 million views, four albums, and four million YouTube subscribers. And so, The Piano Guys was born.

Here are some other interesting tidbits about The Piano Guys you might not have known:

Jon Schmidt, Steven Sharp Nelson, and Al van der Beek all thought Paul Anderson was dreaming when he told them he wanted to make videos of pianos in exciting places, like speeding trains, steep cliffs, and all the Seven Wonders of the World. So they told him, "Why don't we start in your backyard and work from there," according to an LDS Face to Face event in 2015. But that crazy vision is quickly becoming a reality as the group has already performed on four of the Seven Wonders of the World—the Great Wall of China, the Christ the Redeemer statue in Brazil, Chichen Itza, and Petra.

When asked how the Piano Guys stay true to their faith in the music industry, Jon Schmidt said during the Face to Face, "We let them [the record company] know that the only way we would sign the record contract and enter into a relationship with them was if they would respect that we wanted to have control and we didn't want to do things that went against our standards or beliefs."

Then, he counseled the youth to set their standards early, before challenges come. That way, they will already know what they believe and what to do when problems do arise.

Steven Sharp Nelson added, "As you shine and as you really commit to those standards, people love it and respect it."

Paul Anderson shared that, even after outlining their beliefs at the outset, The Piano Guys have still come against many choices that challenge their faith. But Steven Sharp Nelson also noted that they've received unexpected support in standing for their standards.

The attorney for The Piano Guys is Jewish, and when he first heard about the artists' religion, he became very excited about their standards. As Nelson noted, "[Our attorney said] 'Really, you don't drink? Really? I'm going to write that into the contract.' So our Sony contract now has this religion paragraph."

Though unique to begin with, this record contract continues to tailor itself even more to the performers' Mormon faith. Nelson told how his attorney researched all of their beliefs, writing those into their contract and coming to him frequently, saying, 'Look, I just put this one in there . . .and if they go against this, we'll sue them.'"

Of all of the incredible places The Piano Guys have traveled to together—of all the breathtaking landscapes and exciting settings, of all the history and unbelievable experiences--Steven Sharp Nelson gave a surprising answer to the question of the favorite place he has been to with the group.

Explaining some of the exotic locations they've been to so far, he added, "All of those paled in comparison to being in the temple and seeing Al sealed to his family for time and all eternity. And that is spectacular."

For more from The Piano Guys, check out the whole Face to Face event below.

Lead image a screenshot from the Face to Face event