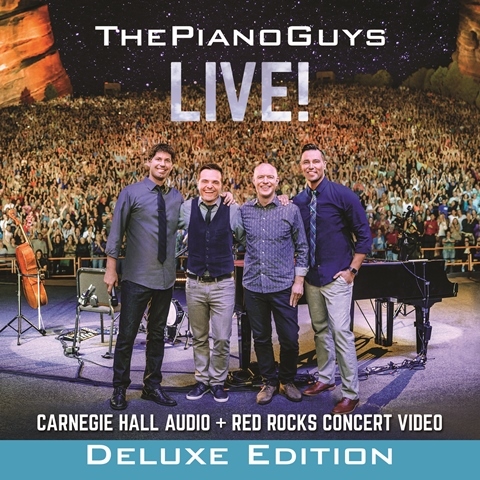 Including Canadian Run in Spring 2016

(October 16 - New York, NY) – The Piano Guys continue their fairytale story of turning a musical hobby and friendship into an extremely successful worldwide career. The four talented dads from Utah, have climbed the Great Wall of China for their craft, landed atop Billboard charts, sold out tour dates around the world, accrued a massive social media following and scored YouTube viewership at 730 million-plus views.  On November 13, they reach a new career milestone, releasing their first ever live album, The Piano Guys – Live! (Portrait/Sony Music Masterworks). The deluxe package features live audio from The Piano Guys’ sold out performance at the world’s most famous concert hall, Carnegie Hall in New York City, plus live video from their sold out concert at the stunning outdoor amphitheatre, Red Rocks in Colorado.  Plus, The Piano Guys latest video “When Stars and Salt Collide,” their take on the Coldplay hit, “A Sky Full of Stars, is a heartfelt dedication to their fans – check it out here.

"Playing Carnegie's stage was an unbelievable experience for us,” says Steven Sharp Nelson.  “As we stepped out onto the same wood that has supported the feet of so many "Greats" we were filled with an amalgam of awe, intimidation, and gratitude. And to share the stage with artists we love and admire - Peter Hollens, Julie Nelson and Alex Boyé was sublime… We're thrilled we had the opportunity to record this experience and give it back to everyone that made this journey possible."

Of their epic experience at Red Rocks, Jon Schmidt says: "Our favorite part of our shows is the chance to interact with the audience. Never has this opportunity been grander than at Red Rocks. Playing to a sea of people ebbing and flowing between ancient red rock walls that seemed to scrape the sky was unlike anything we've ever experienced. Capturing it on film took a mountain of effort, utilizing 30 cameras, a plethora of microphones and more people than we've ever had backstage. With this live DVD/internationally syndicated TV program we hope we can pull people in to experience this unforgettable night with us."

The DVD performances recorded at the scenic Red Rocks Amphitheatre features 14 songs including popular mash-up melodies “Ants Marching /Beethoven Ode to Joy,” and “The Mission / How Great Thou Art.” It also includes their top viewed video, a re-imagined version of One Republic’s “Beethoven’s 5 Secrets.”

The Piano Guys - Steven Sharp Nelson, Jon Schmidt, Al Van der Beek and Paul Anderson are an American musical group who became an online sensation by way of their immensely successful series of strikingly original self-made music videos. They’ve made 50-plus music videos since early 2011, including their breakout hit, an innovative multi-handed version of One Direction’s “What Makes You Beautiful” and a gorgeous reinvention of the hit song “Let It Go” from Disney’s Frozen. To date, the Utah-based classical-pop group has released four major label albums on Portrait/Sony Music Masterworks: The Piano Guys, The Piano Guys 2, A Family Christmas and Wonders. Their catalog continues to claim the top positions on Billboard’s Classical and New Age album charts.

The Piano Guys continue to tour the world. In Spring 2016 they will make their way through Canada on their first National Tour of the country.