byWilliam G. Hartley and Michael Hubbard MacKay, excerpted from "The Rise of the Latter-day Saints" | Oct. 12, 2019

One evening Lydia [Knight] requested me (Newel Knight) to go to the Prophet and get a handkerchief from him, or ask him to send her a healing blessing. And, said [Lydia], “I believe I shall be healed.” She would have been glad to have sent for him to come and lay hands upon her, but did not feel worthy to trouble him . . . as the multitude of business and care he had over the Church she knew was more than he was able to endure with the sufferings of the saints.

On this account I felt delicate about calling on him. I went out and met Brother Hollman and talked with him, returned to my wife, and handed her my handkerchief. She took it but was not better. The next day her fever and pain was severe. Dr. Stobey called on us and I requested him to do something for my wife for her relief. He gave her medicine, which she took. He also gave medicine to our babe.

About the first of September a small cabin was vacated and I took my family into it. Lydia was confined to her bed at the time. She continued to take medicine but got no relief. For near two weeks her strength failed, and she was reduced so low she could not speak aloud. I went to her one evening after she had suffered much through the day when she, in a whisper, said, “Newel, I am very low. If the Lord does not interfere in my behalf, I shall soon be worn out, for medicine does me no good and I am almost gone.” Her strength was now exhausted and she said no more.

I felt that I had not done right in neglecting to go to the Prophet as she had requested, although I had not told her the handkerchief I gave her was not from him. I left her, went immediately to the Prophet, and requested him to send her his handkerchief with a word of consolation and a healing blessing. “Go,” said he. “Tell her the Lord shall bless her and her Heavenly Father shall heal her.”

I hastened to my house and went to the bed side of my companion and told her all that I had done and the promise that the Prophet sent to her. I laid the handkerchief upon her head and prayed the blessing to be sealed upon her. From her calm appearance it was evident that there was a change in her feelings. She soon fell asleep and rested well during the night. In the morning she said she had felt no pain during the night. At the moment I laid the handkerchief upon her head, the pain ceased and she did not feel as if there was any disease about her at this time.

Yet she was weak, the next day the doctor came to see her. He looked at her and examined her pulse and tongue. He said he had never seen so great an alteration in a patient in his life. [The doctor] said, “There is no disease about her. Let her be a little careful until she recovers her strength and she will get along.” It was a few days until she was up attending to her sick babe and cares about the house. 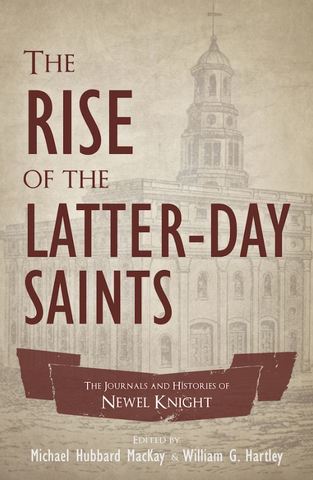 The Rise of the Latter-day Saintsis comprised of several histories written by those closest to Joseph Smith when the church was established and when the Church began to grow in the 1800s. One of the most important histories that is included, that has not previously been available, is a complex history of the early Church written in several installments by Newel Knight. He was one of a few early converts to write about the founding events in Church history.

During the last five years of his life, he wrote a personal history composed of two elements: autobiography and journal. Though extremely important to the history of the Church, Knight's history has always been a difficult source to use because it was never published in one place until now. This publication of his history brings together his manuscripts and offers a way to cite them more precisely.

Mormon Life PriesthoodPriesthood,Mormon Life
Comments and feedback can be sent to feedback@ldsliving.com